We arrived at Deir Yassin two hours before the beginning of the ceremony. Deir Yassin is located behind a fence today, so it was not possible to approach the houses. The village has been turned into a closed mental hospital called 'Kfar Shaul', an interesting relationship between massacre and craziness.

Therefore the ceremony took place in front of the village near the children's playground of the 'Har Nof' neighborhood. Orthodox Jewish children were very interested in what we were doing and they asked a lot of questions. They heard stories that they probably have not heard before. Later on older people started asking questions too.

We posted signs bearing the names of the 93 victims on the fence outside the hospital and people could approach them and read the names. We also prepared pictures of the Deir Yasin as it exists behind the fence. In honor of the ceremony we published a small booklet that contains historical background on Deir Yasin, testimonies, writings, and the names of the victims.

At around three o'clock people started arriving. They gathered by the hospital road, where the police were standing and looking at us with interest. At about 4:00 p.m. we started walking toward the site of the ceremony. Most of the people took their seats while others remained standing. There were about a hundred chairs.

Nada and Norma from Zochrot facilitated the ceremony. Heria from the Remembrance Organization of Deir-Yasin was the first to deliver a speech. She was also one of the organizers of the ceremony. Eitan Bronstein from Zochrot was the next to speak.

In the second part of the ceremony the crowd listened to testimonies. Leena Dalasheh, a participant in the ceremony, read the testimony of Fehmi Zidan in Arabic and in Hebrew from a small book. Then Abdallah Aziz Barakat, 81 years old, told his story. He is originally from Kolonia, near the village, and his mother is from Deir Yasin. He used to visit his grandparents and uncles in Der Yasin regularly. He began his story by describing the good relationships that Arab villagers and their Jewish neighbors enjoyed before 1948. He said that "before those Jews who came from Europe to Palestine, Arabs and Jews often visited each other and exchanged gifts". Then he started to describe the beginning of the fighting, the fire, the cry of the children and the screaming that was heard from every corner. He explained how the Jewish attackers took over the village and humiliated the people of Deir Yasin. They shot everything that moved, he said, women, children, and men. After occupying the village they put wounded people with torn clothes and naked women on trucks and drove them around the city of Jerusalem, so that other people would learn and see what was done in Deir Yasin. Then they were massacred in a nearby quarry. Seventeen of the victims were from Barakat's family and their names appeared on the posted signs.

Finally, Jewish and Arab participants from different organizations and from the educational sector read the names of the victims to the sound of an oud player. 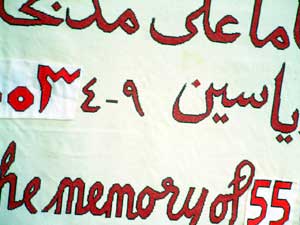