Al-Dawayima Before 1948
Placed 18 km from Hebron, the village was spread along the top of a wide rocky ridge on the western side of the Hebron Mountains. It was connected to Idna, in the northeast, and also to al-Qubayba in the northwest, which was further linked to the al-Faluja-Bayt Jibrin highway. With exclusively Muslim inhabitants, the village maintained several religious shrines, among which the shrine of Shaykh 'Ali, attracting people from the surrounding villages. There was a mosque in the centre of the village, expanded and renovated in 1930s, when a tall minaret was also added.

With a star-shaped layout which permitted expansion in all directions, the village has several scattered shops, and its houses were made of stone and mud, separated by narrow streets and alleys. The older houses were clustered together, and each group of houses shared a large courtyard (hawsh). New, larger, stone houses were also built outside the village core. An elementary school was opened in 1937. Drinking water was obtained from wells collecting rainwater, and in 1940 three more wells were drilled. As often was the case, rainfed agriculture and animal husbandry were the main economic activities, in addition to which the villagers also engaged in the spinning and weaving of tents and sacks for storing grain.

Al-Dawayima had two grain mills, ten butchers, and thirty to fifty small shops. In 1944, a weekly Friday market was introduced, which brought in residents from other villages and towns, among which Bayt Jibrin, Hebron, and Gaza. Built on an archeological site, Al-Dawayima also laid in the vicinity of a large number of khirbas (ruins).

Occupation, Depopulation and Israeli Settlements
A large, but little known, massacre was carried out on the site of al-Dawayima on 29 October 1948, during the Israeli army's Operation Yo'av, which generated a massive flight of people from the area. Historian Benny Morris quotes a participant in the attack as saying that 80 to 100 people, including women and children, were killed by 'the first wave of conquerors'. The Israeli daily 'Al ha-Mishmar gives the following description: 'The children they killed by breaking their heads with sticks. There was not a house without dead... One commander ordered a sapper to put two old women in a certain house...and to blow up the house with them. The sapper refused...The commander then ordered his men to put in the old women and the evil deed was done. One soldier boasted that he had raped a woman and then shot her...'

Moreover, interviewed in 1984 by the Israeli daily Hadashot, the former mukhtar (head) of the village recalls the following: 'The people fled, and everyone they saw in the house, they shot and killed. They also killed people in the streets. They came and blew up my house, in the presence of eye-witnesses. [...] The moment that the tanks came and opened fire, I left the village immediately. At about half-past ten, two tanks passed the Darawish Mosque. About 75 old people were there, who had come early for Friday prayers. They gathered in the mosque to pray. They were all killed.' According to the mukhtar, thirty-five families were hiding in caves outside al-Dawayima, including some from the previously occupied village of al-Qubayba. When discovered by the Israeli forces, '[t]hey told them to come out and get into line and start to walk. And as they started to walk, they were shot by machine guns from two sides...We sent people there that night, who collected the bodies, put them into a cistern, and buried them.'

When taken back to his village in 1984 for the first time since the massacre, the mukhtar showed an Israeli journalist where his home had been, as well as the cistern where the bodies had been buried. The journalist returned with four labourers a few days later. After digging for a short while they discovered several human bones, including three skulls, one of which was a child's. They stopped digging and reburied the bones.

Although a number of further investigations were launched, they were generally ineffectual and only ended with the disciplining of some soldiers and the issuing of a set of rules on the Israeli army's treatment of Arab civilians. The Eighty-Ninth Battalion, commanded by the founder of the Palmach, General Yitzchaq Sadeh, was the unit responsible for the massacre. When the issue of al-Dawayima was raised again in December 1984, during a general discussion of atrocities by an Israeli ministerial committee, Agriculture Minister Aharon Zisling said: 'This is something that determines the character of the nation...Jews too have committed Nazi acts.' [Benny Morris] While complaining that the investigation was not proceeding as it should, he nevertheless agreed with other ministers that Israel should admit nothing outwardly, in order to preserve its image.

In 1955, the settlement of Amatzya was established on the ruins of the village.

The Village Today
The site of what used to be al-Dawayima has been fenced in. At its (now levelled) centre a cowshed, a chicken coop, and granaries have been built. The eastern side is occupied by the residential area of the moshav, while the southern side of the village contains stone terraces and the remnants of a house. 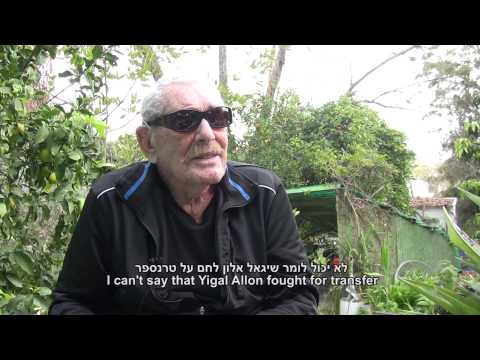 Testimony by Zvi Steklov, Palmach soldier
12/2012
Zvi Steklov was born in 1927 in Tel Aviv. As a member of Kibbutz Revadim in Gush Etzion, he joined the Palmach's Sixth Battalion (Eighth Platoon) in...
54717