Lifta Before 1948
The village stood on the slope of a steep hill and faced north-northwest, overlooking Wadi Salman. The Jerusalem-Jaffa highway ran immediately southwest of it, and dirt paths linked it to a group of neighboring villages. Although the identification of the village has been debated by biblical scholars, Lifta is believed to have been established on the site of Mey Neftoach, a source of water near Jerusalem. The site retained this name during the Roman period and was called Nephto during the Byzantine era. Almost nothing is known about the village in the early Islamic period; however, during the Crusades the village was referred to as Clepsta.

In 1596, Lifta was a village in the nahiya of Jerusalem with a population of 396. It paid taxes on a number of crops, including wheat, barley, olives and fruit, as well as on orchards and vineyards. In 1834, the village was the site of a battle in which the Egyptian army under Ibrahim Pasha defeated local rebels led by a prominent local ruler, Shaykh Qasim al-Ahmad. The family of Qasim al-Ahmad remained powerful, however, for years after this battle. They ruled the region southwest of Nablus from their fortified villages some 40 km due north of Lifta. In the late nineteenth century, Lifta was situated on the side of a steep hill, with a spring and rock-cut tombs to the south.

The village houses were built mainly of stone, along the contours of the hill. The old streets of the village also ran in curvilinear fashion. The village expanded markedly towards the end of the Mandate; construction spread east, up the slope of Mount Khallat al-Tarha, linking the village with the buildings of the Rumayma neighborhood in the northwestern quarter of West Jerusalem. Construction also expanded towards the foot of the hill in the south and southwerst, along the Jerusalem-Jaffa highway. Lifta’s population was predominantly Muslim; its Christian residents were estimated at 20 out of a total of 2,550 in the mid 1940s. The village had a mosque, a shrine for Shaykh Badr, and a few shops at its center. It also had an elementary school for boys and a girl’s school that was founded in 1945. There were, in addition, two coffeehouses and a social club.

The village was in effect a suburb of the city of Jerusalem, and its economic ties with the city were strong. The farmers of Lifta marketed their produce in Jerusalem markets and took advantage of the city’s services. Their drinking water was drawn from a spring in Wadi al-Shami. Their lands were planted in grain, vegetables, and fruit, including olives and grapes; olive trees covered 1,044 dunums. The rainfed agriculture of the village was concentrated in Wadi al-Shami in the depressions lying to the southwest of the village, and on the slopes in 1944/45 a total of 3,248 dunums was planted in cereals

Occupation and Depopulation
The fighting in Lifta, as well as the adjacent Jerusalem districts of Rumayma and Shaykh Badr, was triggered by the Haganah in the earliest days of the war. The History of the Haganah states that “Securing the western exit of the city [of Jerusalem] entailed the eviction of Arabs from Romema and Shaykh Badr. Afterwards, the Arabs also vacated Lifta.“ Other sources supply further details. According to Israeli historian Benny Morris, the Haganah fired the first shots in December 1947, killing the Palestinian owner of a filling station in Rumayma, on the grounds that he was suspected of informing Arab forces about the departure of Jewish convoys to Tel Aviv. The next day, a grenade was thrown at a Jewish bus.

Palestinian historian ‘Arif al-‘Arif adds that a coffeehouse in Lifta was attacked on 28 December with Sten guns and submachine-guns, and that six of the patrons were killed and seven wounded. The New York Times account puts the number of dead at five, adding that members of the Stern Gang halted their bus outside the cafe, sprayed the patrons with machine-gun fire and threw grenades.

Al-‘Arif writes that most of the residents of Lifta left after the attack on the coffeehouse and the rest evacuated soon afterwards. These actions were followed by a number of others, with the Haganah, Irgun Zvai Leumi, and Stern Gang repeatedly raiding both Rumayma and Lifta. In neighboring Shaykh Badr, the Haganah blew up the house of the mukhtar on 11 January, and two days later launched a second raid in which twenty houses were damaged. Most houses on the eastern periphery of Lifta were also demolished. Morris adds that the purpose of these demolitions was to turn the Palestinian residents out of their homes; to a large extent, this goal was achieved. By 7 February 1948, Jewish Agency chairman David Ben-Gurion expressed his satisfaction with the results of the attacks at a meeting of Mapai party leaders: “From your entry into Jerusalem through Lifta - Romema, through Mahane Yehuda, King George Street and Mea Sharim - there are no strangers. One hundred percent Jews.“

Israeli Settlements on Village Lands
The settlements of Mey Niftoach and Giv’at Sha’ul were built on village lands and now have become parts of the suburbs of Jerusalem.

The Village Today
Most of the houses remaining on the site are deserted, although some have been restored for the use of Jewish families. A basin that had been built around the spring in Wadi al-Shami lies in ruins. The mosque and the village club are still visible, north of the spring. Adjacent to the mosque, on the western side, is a cemetery covered with bushes and wild grass. The village orchard of  fig and almond trees is located at the bottom of a wadi along a stream flowing from the spring. Jewish families have moved into three of the old village houses. The ruins of other houses are visible in various parts of the site. In 1987, the Israeli Nature Reserves Authority planned to restore the “long-abandoned village“ and and to turn it in an open-air natural history and study center that would “stress the Jewish roots of the site.“ This project, with an estimated cost of $10 million, would be financed from donations. 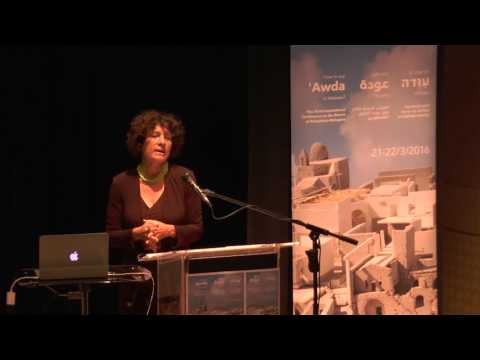 Vulnerable Domestic Spaces of Lifta
By: Yulia Gilichinskaya
2017
Less than a mile away from the Jerusalem Central Bus station lies the destroyed Palestinian village of Lifta.

Remembering the Catastrophe
By: Eitan Bronstein Aparicio
04/2014
Podcast on the birth of Nakba ceremony in Tel Aviv University, A Jew living in Lifta, and Zochrot

It's all about people
By: Laura van Rij
06/2013
Narratives from Lifta

Photographing what remains of villages after the Nakba: An event concluding the exhibit “What isn’t...
By: Eitan Bronstein Aparicio
08/2012
The photographic act allows us to try to reclaim ownership of places that have been taken over by the state.  The photographs...

Lifta, a poem
By: Tom Baskett
10/2007
You have to leave theearly morning traffic snailingits way around the dry hillsthreading through the lime-whitetowersfulfillment of...

A day in Lifta
29/07/2013
They think that it might have been a Mikveh, but they are not sure. One girl came here already. She's a youth leader at Bnei Akiva

Shmuel Groag, architect and conservation and heritage consultant
29/07/2013
I changed my mind when I met the Liftawi´s. I didn´t know they were living in Jerusalem. I saw real people, connected to the real...

Raida Adon, artist
24/07/2013
When I went there I felt a lot of energy, I listened to the silence and the wind and it was like the buildings were talking to me. I...

Ahmad, son of former residents of Lifta
28/06/2013
There were people living in our house. My father asked them if he could show us the house, they didn´t want to let him in

Sari Nasir, former resident of Lifta
26/06/2013
Suddenly cars came, we heard shooting. I looked and many men were running away. Others ran and fell, and people were shouting. My...

Itzik Shweky Regional manager, Society for preservation of Israel heritage sites
23/06/2013
I won´t bring life back to the 16th century. We live in the 21st century now; we want to keep the houses, but I´m not going to...

Tzipi Kirma, former resident of Lifta
16/06/2013
Only me and another girl from the school in Lifta went to the school in Jerusalem. They didn´t tell us, but you feel you are...

Yoni Yochanan, resident of Lifta
03/06/2013
In 1953 the government brought the people from Kurdistan to Lifta. Not only because they wanted to give us a house, but also to make...

Amina, former resident of Lifta
03/06/2013
´Be ready Abu Musa, when they come you have to be happy for your son and his wedding and make sure everybody can eat!´

Yakoub Odeh, former resident of Lifta
23/05/2013
We are struggling to keep Lifta at least in the condition that it is in now. But we want to renovate it. Not to go back and live in...

Danielle Schwartz, filmmaker
21/05/2013
I didn´t know the history of the place back then but it just looked like a postcard, like a fairy tale. There is something magical...

Ilan Shtayer, coordinator of the Coalition to save Lifta
20/05/2013
It is difficult to remember what happened here, if you leave the village like it is you cannot forget that

Ahmad Kharouf, projectleader at Bezalel documentation program
19/05/2013
I started to develop feelings for Lifta in these weeks I did the documenting workshop. I understood that there is a really big...

Eliyahu Ungar-Sargon, documentary filmmaker
06/05/2013
Showing the beauty and connecting it to the tragedy is exactly what people should be doing

Sousouni Bajis, the Lifta Society Chicago
03/05/2013
People come and go but Lifta is a historical village and people stayed here for thousands of years. I hope in the future the Lifta...

World bodies must act now to save Lifta
By: Antoine Raffoul
30/11/2011
Earlier this year, the group 1948 Lest We Forget filed an application to the World Monuments Fund (WMF) to include the Palestinian...

Wounds of dispossession reopened
By: HARRIET SHERWOOD
31/05/2011
In the golden light of a spring evening, Yacoub Odeh climbs through knee-high grass to the ruin that was his childhood home.
5303253801