Al-Ghubayya al-Fawqa Before 1948
The village was situated 28 km away from Haifa, and together with al-Ghubayya al-Tahta and al-Naghnaghiyya formed a group known as al-Ghubayyat (the 'little forests'), on the eastern slopes of the bilad al-rawha' (the 'fragrant country'), with the Haifa-Jinin highway running immediately northeast of the village.

'Fawqa' in Arabic means 'upper', and the particle served to distinguish it from its 'lower' counterpart - al-Ghubayya al-Tahta. In 1596, al-Ghubayya al-Fawqa was a village within the administrative district of Lajjun and had a population of 215. The inhabitants of the village were Muslims and their houses were built of cement and mud, and were dispersed across the slopes. The three villages part of al-Ghubayyat shared an elementary school built about 1888 during Ottoman rule which was closed under the British Mandate.

Al-Ghubayya al-Fawqa had a mosque and a shrine for a Muslim sage - al-Shaykh Ahmad, and its cemetery was located on a hill in the upper part of the village. The three villages had access to a number of water sources including wadis, springs, and the al-Muqatta' River. Their economies were based on animal husbandry and agriculture, with grain being the chief crop. An unexcavated archaeological site, Tall al-Asmar, lay some 300 m southwest of the village.

Occupation, Depopulation, and Israeli Settlements
Al-Ghubayya al-Fawqa was one of the first villages to be captured by the Haganah following the battle of Mishmar ha-'Emeq, in the first half of April 1948. Along with al-Ghubayya al-Tahta, the village was occupied by Haganah units drawn from the Palmach, as well as the Carmeli and Alexandroni Brigades. On 8-9 April they first entered the villages during 'fierce fighting', and 'there was house-to-house fighting in the village throughout the night' - according to Arab Liberation Army (ALA) commander Fawzi al-Qawuqji. The following day, he relates, the fighting developed into a pitched battle and the Zionist forces were driven out - dates confirmed by Filastin. The Palestinian newspaper further reported that the battle from 10 April was 'long' and 'violent', and was waged inside the village itself. According to the History of the Haganah, the control of the villages was precarious over the next few days - while they managed to retain a presence in them during the night, they were forced to withdraw under ALA bombardment during the day. Nevertheless, this did not prevent the Haganah units from destroying the village 'piecemeal' [as Benny Morris put it].

Palestinian historian 'Arif al-'Arif states that, some time before the battle, the people of al-Ghubayya al-Tahta - whose village had been destroyed - joined the people from al-Ghubayya al -Fawqa, bringing thus the number of inhabitants to 1,400. There are divergences between the accounts of what became of the population after the battle erupted - the Haganah stated that by 13 April ALA forces had withdrawn from the entire area, while the ALA reported that it recovered the al-Ghubayyat villages briefly on 14 April.

The Haganah and Ben-Gurion took the decision to expel the Arab inhabitants of the area and raze the villages near Mishmar ha-'Emeq in order to permanently remove the 'threat to the Yishuv'. Al-Ghubayya al-Fawqa was blown up by the Haganah and Palmach, with the help of local Jewish settlers within the next week.

The Village Today
The site is overgrown with cactuses, fig, almond, and carob trees, and the debris of the houses is visible among the vegetation. A big heap of stones where the mosque once stood can also be seen. The cemetery is covered with thorny plants and weeds, while the surrounding lands are used by Israeli farmers for various purposes, such as pasturing cattle and growing cotton.
------------------------------------ 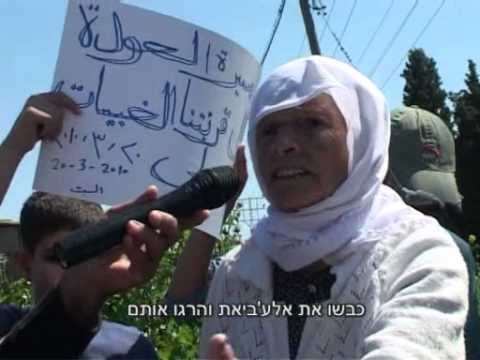