The village, a twin of al-Nahr, was situated on a sandy, slightly elevated mound on the eastern part of the coastal plain, in the Galilee region. The village was on the main road that connected Tarshiha, the settlement of Nahariyya, and Acre. It was located 14 km northeast of Acre. Like its twin village al-Nahr sits on archeological remnants dating back to 1800BC .

At the end of the 19-th century al-Tal had a population of 200 people. They ground their grain at a nearby water-powered mill and tended olive, pomegranate and mulberry trees.
The village had a rectangular layout stretching from southeast to northwest with houses built of a variety of materials- stone blocks' cement, mud mortar and reinforced concrete.
Occupation and Depopulation

Al-Tall was one of several villages occupied during the second phase of Operation Ben-Ami on 20-21 May 1948. It probably met the same fate as other villages in western Galilee that were attacked by the Carmeli Brigade. On orders from the Brigade's commander, Moshe Carmel, most of the villages were razed by Haganah sappers following their capture. This was done "both to punish the villagers... and to make sure the villagers could and would never return."
There are no Israeli settlements on village land. Some public installations belonging to the Mekorot Water Company are found near the site.

The site is covered with the rubble of stone houses and is overgrown with wild grass. One stone house still stands but its facade is missing and it is about to crumble. Cactuses and fig trees grow on the southern slopes of the site. There are four identifiable Roman and Byzantine tombs in the cemetery that lies on the northern slopes; a Christ's-thorn tree stands in its midst. Recent excavation has uncovered several ancient graves, and the place has been turned into an archaeological site. 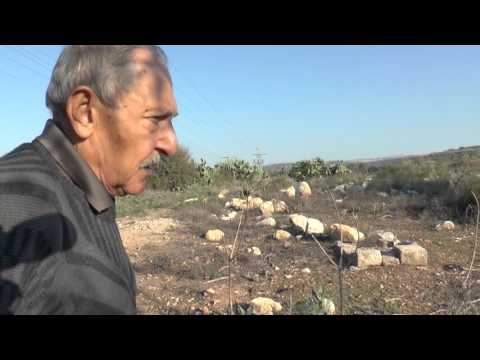