On December 4-6, the third international 48mm Film Festival will be held, featuring films about the Palestinian Nakba and the return of refugees. Together with premieres and special screenings of films from both Israel/Palestine and worldwide, the festival will include new and original films produced especially for the event by Palestinian and Israeli filmmakers on coping with the painful past and searching for a political and human solution to ongoing wrongs and suffering.

The 48mm Film Festival, held by Zochrot, traditionally takes place around November 29, marking the anniversary of the 1947 UN Resolution on the Partition of Palestine. The Partition Plan entrenched the idea of partition and separation between Jews and Arabs in historical Palestine and was – and still is – a key milestone in the ongoing conflict and the uprooting of hundreds of thousands, who have by now become millions of Palestinian refugees. The festival seeks to creatively challenge the partition concept and suggest new pathways for just and equitable life for all the present inhabitants and refugees of this country.

This year, the festival is proud to present major global films from some of the leading international and Arab festivals in one-time premieres. The glaring absence of these movies from Israeli theaters is of course no coincidence, and represents yet another aspect of the exclusion of Palestinian culture and its eradication from any local agenda.

A full 67 years have passed since the beginning of the Palestinian Nakba in 1948, and 48 years have now passed since the subsequent occupation of 1967. The ongoing presence and repressed absence of these constitutive historical events structure and shape the identity of Jewish Israeli society and the lived realities of all those subjected to its rule. Daring to deal with marginalized and silenced aspects of these events and their articulation in present-day realities is the hallmark of this festival, all of whose films use diverse filmic devices to (re)read the lives of Palestinian refugeehood and existence in Israel/Palestine, as well as elsewhere in the world. This year, 48mm offers a variety of contemporary and original works that facilitate a civic discourse and pave the way to accountability and redress as prerequisites for a shared multicultural and equitable life for all the inhabitants of this tormented country and region.

All films will be screened in the Tel Aviv Cinematheque, apart for The Wanted 18 which will be screen in Al-Saraya Theater in Jaffa.

Friday, 13:00-15:00
Opening Event
Tel Aviv Cinematheque 1
Screening of four short films by local filmmakers produced especially for the festival. The screening will be followed by a panel (in Hebrew) with the filmmakers. 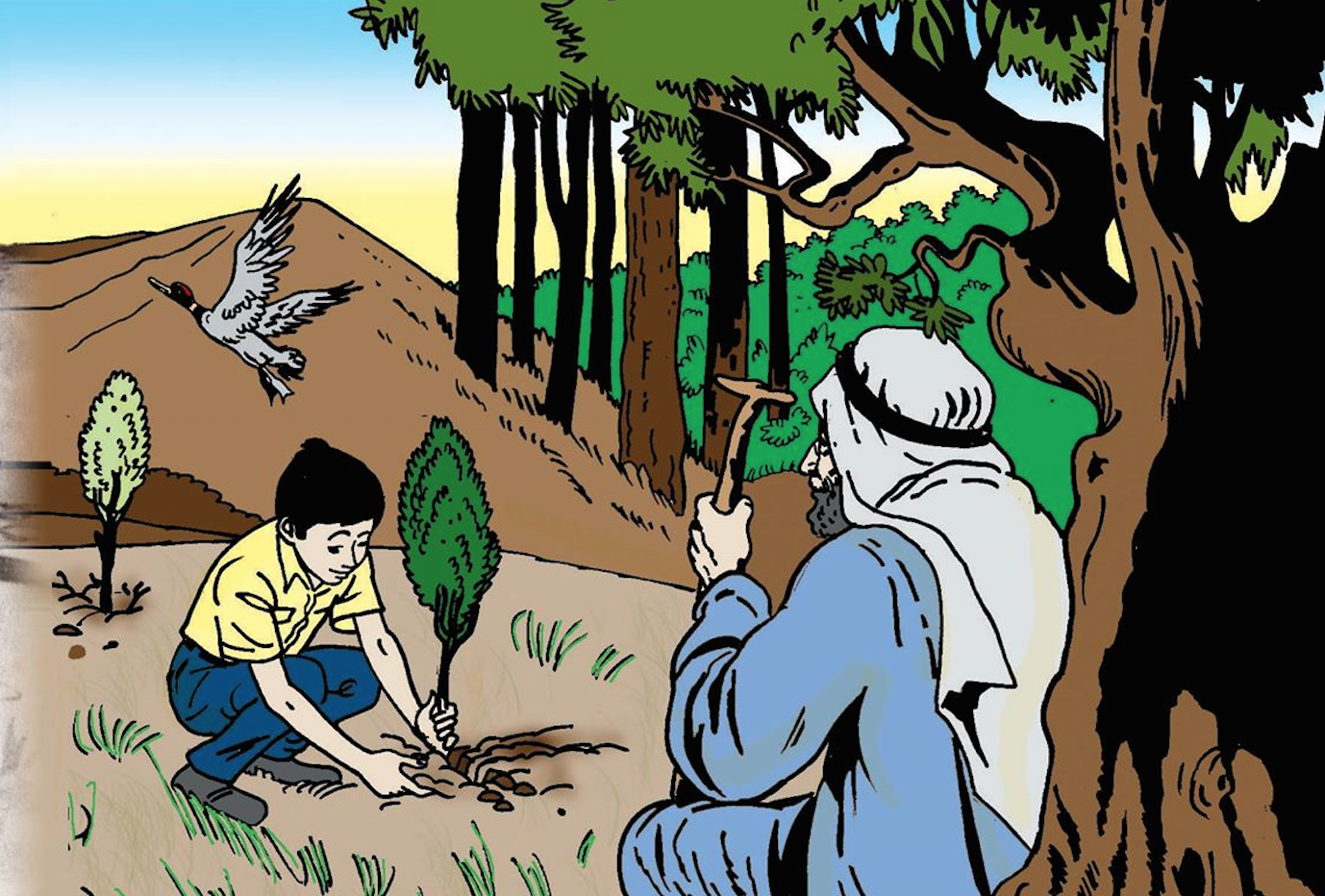 Man with Two Beards
Directed by Amir Yatziv
Israel/Palestine 2015
Documentary, 3 min
A group of students received a collection of drawings taken from history textbooks of the two nations. The film presents the story composed by the children on the basis of these drawings. 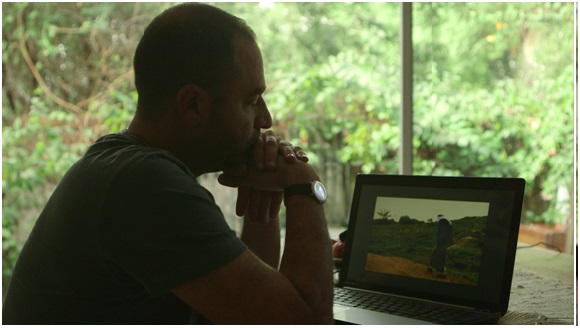 Anava Interchange
Directed by Ayelet Bachar
Israel/Palestine 2015
Documentary, 5 min
A Palestinian refugee returns to visit his destroyed village near Ramle in 1969, and is filmed for an Israeli documentary. Thirty years later, in a different documentary but in a remarkably similar scene, a refugee visits his village again. By an amazing coincidence, they turn out to be the same person: Abu-Muhammad from the village of ‛Anaba. The film returns to these documentaries through the eyes of their directors, Ram Levi and Ra’anan Alexandrovich. Could the return scene be filmed for the third time? 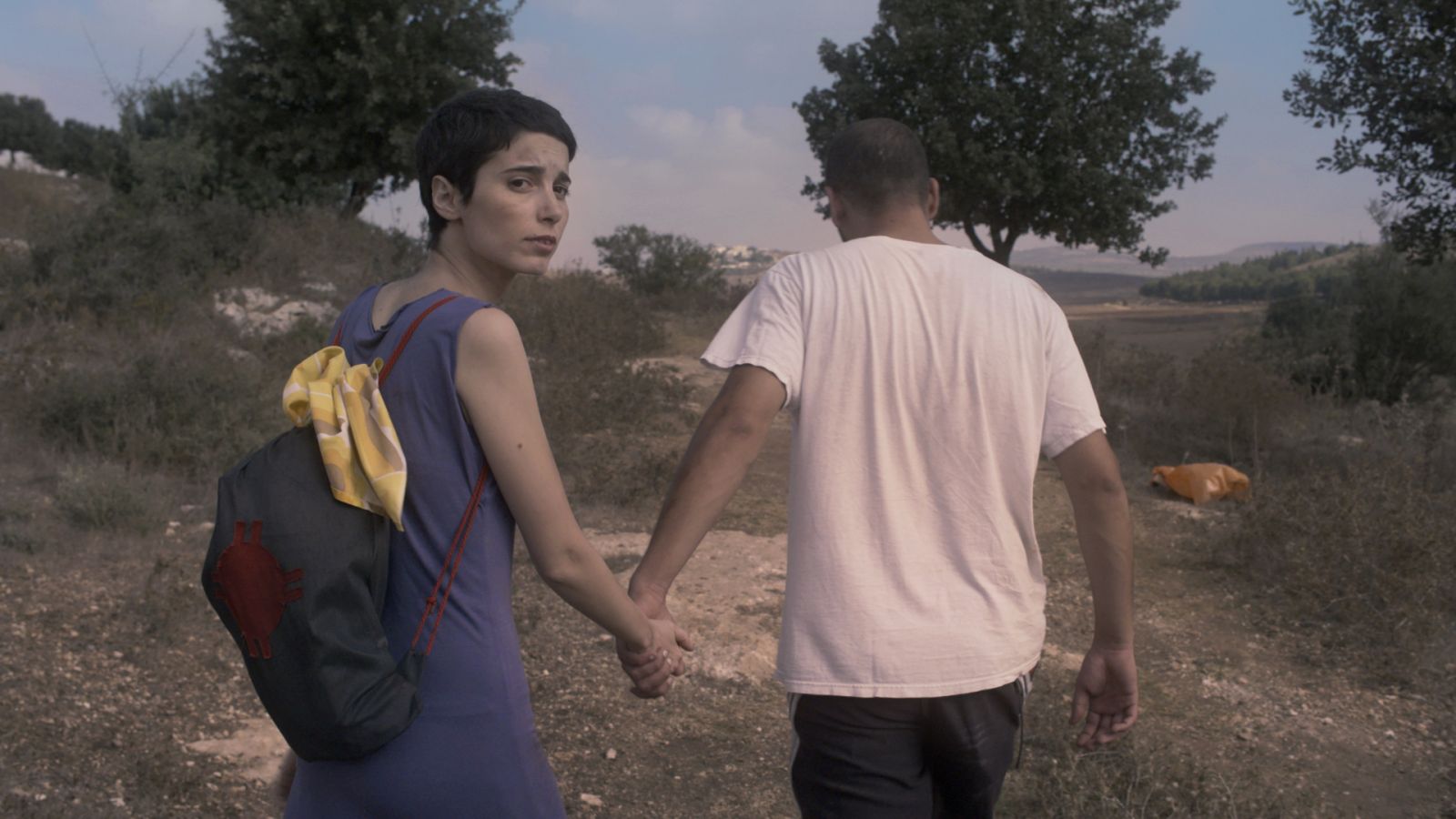 Guava
Directed by Thalia Hoffman
2015
Experimental, 10 min
Part of a series of artworks documenting human situations along the paths of refugees in a Middle East shorn of its political borders. 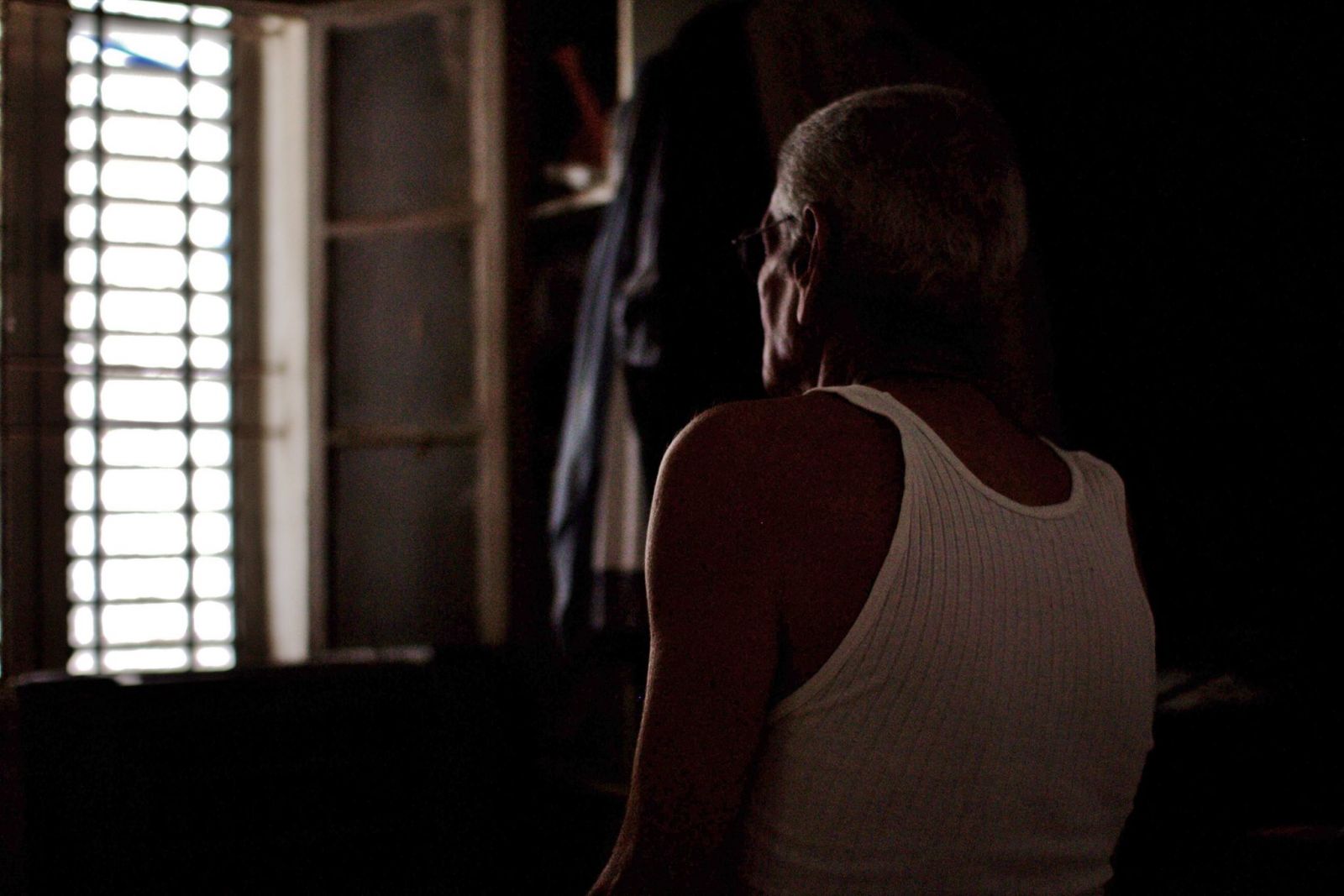 Lighthouse
Directed by Itay Akirav; produced by Jeries Copty, Tony Copty
Israel/Palestine 2015
Narrative, 13 min
Seventy-one year-old Abu-George wakes up in his new home in Lod (Lydda) to yet another gray morning and walks out. During the day, we will discover what he left behind and what he would never be able to.

Friday, 15:30-17:00
Roshmia
Directed by Salim Abu-Jabal
Palestine 2014
Documentary, 70 min, Arabic with Hebrew subtitles
An old Palestinian couple in their hopeless struggle to maintain their traditional way of life in Roshmia, the last natural riverbed in Haifa. Yussuf Hasan is a refugee from the Haifa neighborhood of Wadi Salib. His wife Amna is a refugee from Yazur (renamed “Azur”). One day, the two discover that the Haifa Municipality decided to pave a road through the riverbed, connecting the harbor and the Carmel area. The owners of the shack experience their forced displacement as a secondary Nakba. This is the story of refugees forced to leave their home time after time, and to deal again and again with an obtuse policy, that is not only destructive for humans, but also for nature and the environment. Roshmia is based on the short film The Shack produced with Zochrot’s support and first screened in the first 48mm Festival in 2013.

The filmmaker will be present at the screening.

Saturday, 13:00-14:30
Return To Haifa - The Other’s Story
Directed by David Goldenberg
US 2015
Documentary, 73 min, English, Hebrew & Arabic with Hebrew subtitles
The story of the play Return To Haifa directed by Sinai Peter. In 1969, Palestinian author Ghassan Kanafani published a novella about a clash of fates between a Palestinian couple deported from Haifa in 1948 and a couple of Holocaust survivors who moved into their home and raised the baby left there in the rush to flee the battle. Boaz Gaon adapted the novella for the stage, and the play was staged on Tel Aviv’s Cameri Theater in in 2008. The film is about the stories of the actors and stage hands, both Jews and Palestinians, the audience response in Israel and Washington DC, and Kanafani’s personal story.

The film’s participants will be present at the screening.
Previous festivals: Haifa
(Tel Aviv Cinematheque 4)

Saturday, 15:00-16:30
On the Bride’s Side
Directed by Antonio Agugliaro, Gabriel del Granada, Khalid Sulaiman Al-Nasiri
Italy 2014
Documentary, 89 min, Arab & Italian with English & Hebrew subtitles
A Palestinian poet and an Italian journalist meet five Palestinian and Syrian refugees who have fled the horrors of the Syrian Civil War in Milan. They suggest an original idea to the refugees – crossing Europe in the guise of a wedding parade. Their destination: Sweden, where they would be recognized as refugees and be able to start a new life. Together with a Palestinian girlfriend dressed up as a bride, friends acting as guests and a crew in charge of filming the wedding, they go on a fascinating and grueling journey of 3,000 kilometers in four days.

Saturday, 17:00-18:00
Sar’a
Directed by Michael Kaminer
Israel 2015
Documentary, 40 min, Hebrew, English & Arabic with Hebrew subtitles
Sarah Abu-Latifa was born 72 years ago to the Mukhtar (village chief) of the Palestinian village of Sar’a (renamed Tzora) and grew up in his home. In 1948, at age five, she was displaced from the village with her family. Kaminer, the director, was born in 1964 in Kibbutz Tzora, years after the kibbutz houses were moved from the site of Sar’a to the nearby valley. As a child, he would often hike up to the Mukhtar’s House on the hill. He and his friends were never told that the house used to belong to other people, nor who these people were. Through archive materials and talks with the kibbutz founders and refugees from the village, the film embarks on a voyage to discover the hidden truth. Why was the role played by kibbutz members in the fate of the Sar’a victims never revealed? Why was nobody told about the village at all?

The filmmaker and participants will be present in the premiere. 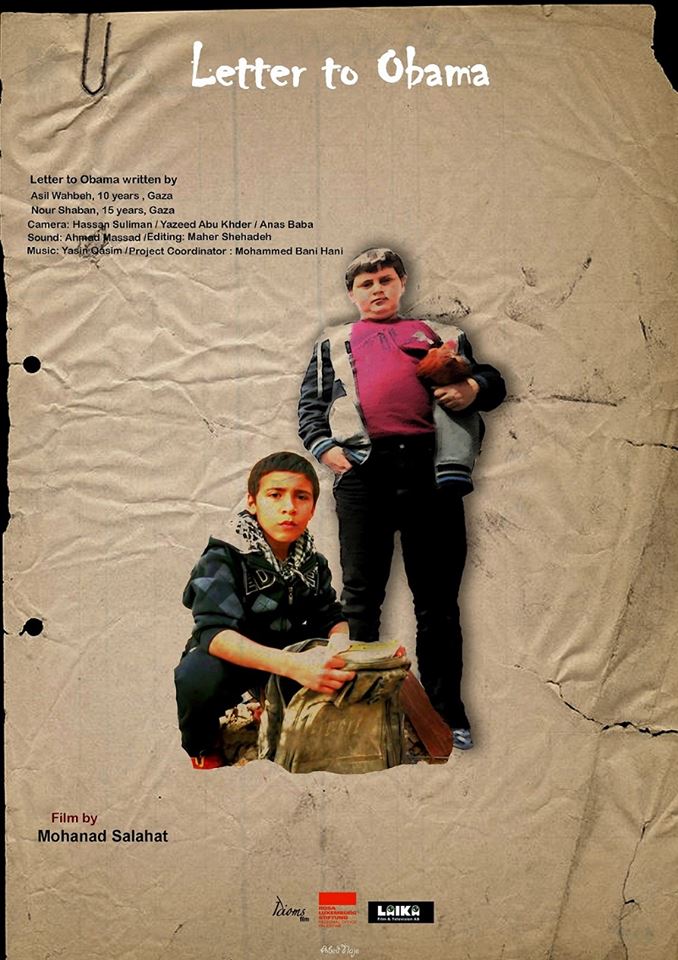 In 1948, French director and critic Alexandre Astruc published the prophetic essay “Le caméra stylo” (“The Camera Pen”), which portrays a vision of filmmaking that is accessible to everyone, just as the pen is accessible to anyone who wishes to write: “The auteur writes with his camera as a writer writes with a pen”. That same year, on the eastern coast of the Mediterranean, the region undergoes historical changes. Sixty-seven years later, Astruc’s essay is more relevant than ever. The digital media – including the movie camera – are just as accessible as the pen, which in turn was also substituted by the work processor and internet, which every writer can use to write and spread the word from almost anywhere in the world.

The discussion will seek to elaborate on some of the issues arising from the festival’s films, and examine how young auteurs react to the region’s history using the digital tools available to them. In the course of the discussion, the panelists will present examples of video works, video activism and documentary/narrative short movies directed by young filmmakers from Israel/Palestine, including works by Palestinian students from Haifa created in a video-art workshop. 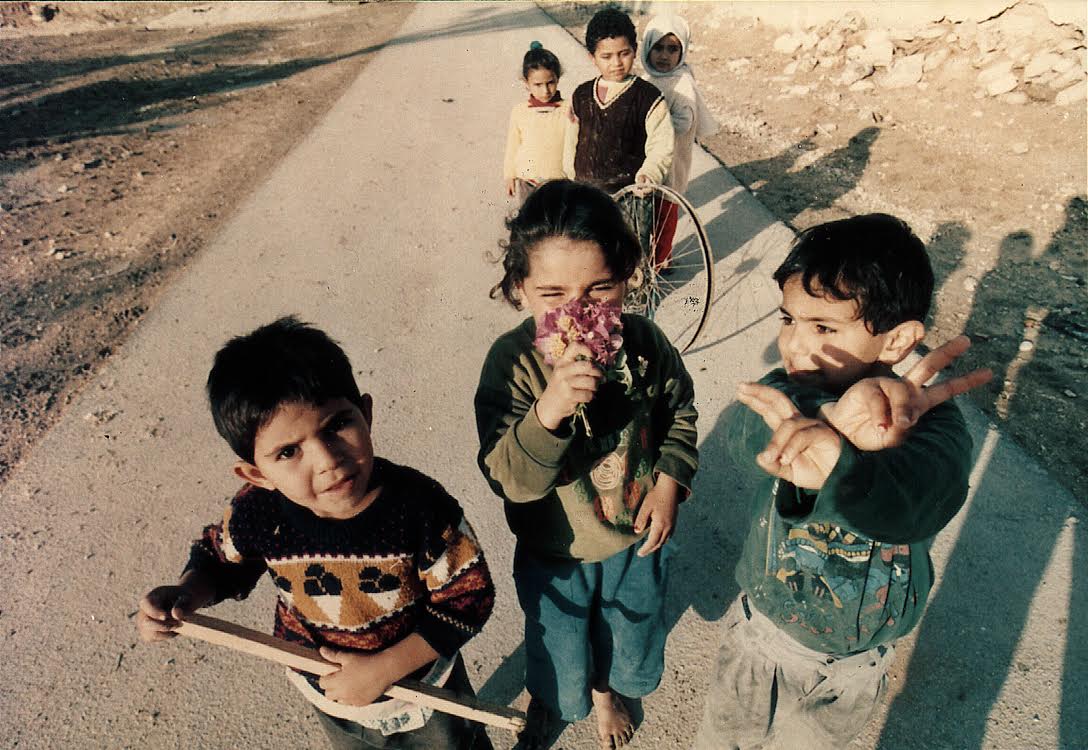 Can peace between Israel and Palestine be possible without the return of the Palestinian refugees to their homeland which has now become Israel? Does the return - either physical or symbolic - of people that suffered an injustice in 1948 when the state of Israel was created, have to take place?
This film, which hopes to be analogical, tells the story of the Palestinian refugees, like all refugees, deported populations, displaced persons, that are the centre of the great conflicts of the 20th century.

The screening of the film will be accompanied by a lecture by Dr. Yael Munk on Eyal Sivan's filmography.

Sunday, 20:30-22:30
The Wanted 18
Directed by Amer Shomali, Paul Cowan
Palestine/Canada 2014
Documentary + Animation, 75 min, Arabic & English with Hebrew subtitles
It’s the First Intifada, 1987. Palestinian leaders urge communities in the West Bank to develop alternatives for Israeli products. A group of Palestinian activists from Beit Sahour is starting a local dairy collective based on 18 heads of cattle. When their “Intifada milk” gains popularity, the Israeli army orders the farm’s closure, declaring the cows a threat to national security. This is the amazing story of strongest military power in the Middle East and its chase after 18 cows.

The 3rd International Film Festival on the Nakba and Return - 2015