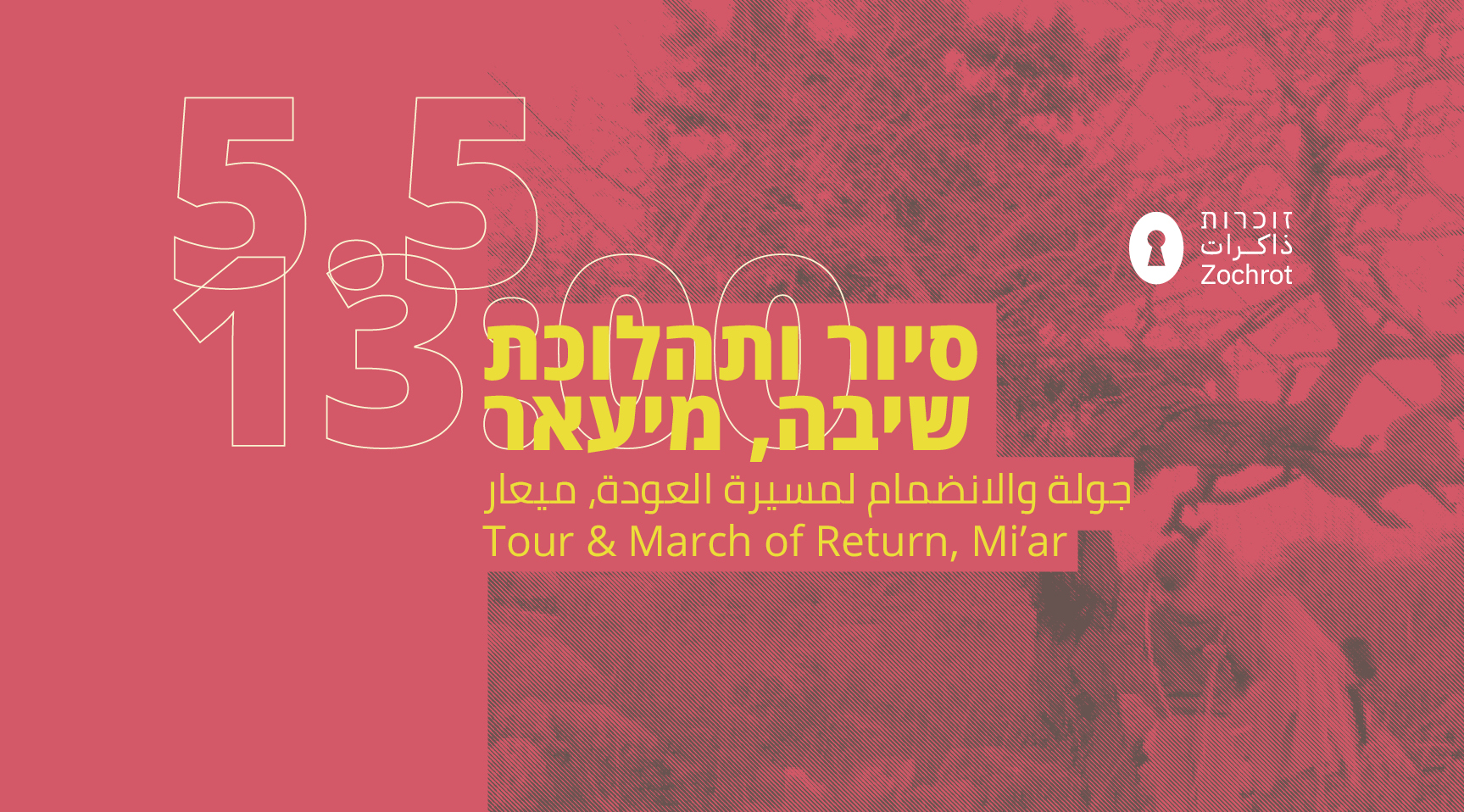 Tour to the depopulated village of Mi’ar and then join in solidarity to the Palestinian march of return 5.5 Thursday | Mi’ar | 13:00

The march to Mi’ar: Study tour in the village and joining the annual return parade

The traditional March of Return organized by the Association for the Defense of the Rights of the Internally Displaced (ADRID) is held every year on the day the State of Israel marks its establishment (“Independence Day”). This year, the march will take place on Thursday, May 5, on the lands of the destroyed village of Mi’ar in the Galilee.

As in every year, Zochrot joins the march and invites all those supporting the right of return of the Palestinian refugees and displaced persons to join it as a sign of support, identification and demand for immediate realization of the right of return.

The march, starting at 15:00, will be attended by thousands, and will include stalls by various organizations, speeches and performances.

Prior to the march, Zochrot will hold a separate study tour, starting in 13:00. Among the ruins of the village, we will learn about Mi’ar’s history and the circumstances of its occupation and the expulsion of its 900 inhabitants in July 1948, and observe the outcomes of Israeli efforts to destroy and erase it over the 74 years since the Nakba.

At the end of the tour we will drive about two miles to the starting point of the march, at the entrance to the village of Sha’ab, and participate until its end.

The instruction language is Hebrew, with Arabic and English interpretation provided as required .

The 2-km walking route is of medium difficulty.

The transportation will leave from 31 HaGdud HaIvri St. in Tel Aviv, near the Levinsky Park, at 11:00. Recommended participation in transportation costs: 50 NIS (or to the best of your ability). Payment can also be made by donating on the Zochrot website.

The transportation will return to Tel Aviv. Please take into consideration traffic congestion on both ways.

To join the transportation, please complete the following form

For additional inquiries, please write to tours@zochrot.org or call Umar al-Ghubari at 052-8473099

For those arriving independently, the meeting point for the 13:00 tour is at the Ya’ad parking lot in the grove planted over the lands of Mi’ar. Leave Route 805 heading for Moshav Ya’ad and immediately turn left, before arriving at the moshav, to the parking lot at the entrance to Mi’ar. Note that the iNakba app is currently being upgraded and is therefore temporarily unavailable.

The event is held as part of the Ten Days of Return activities organized by Zochrot to mark the 74th anniversary of the Nakba and its own 20-year anniversary.

We invite you to join the Zochrot community. Support us with a regular monthly amount so that we can expand our activities and continue to challenge and promote conceptual, political and cultural change for a just future in this country.

Events and activities on Return March of return Commemoration