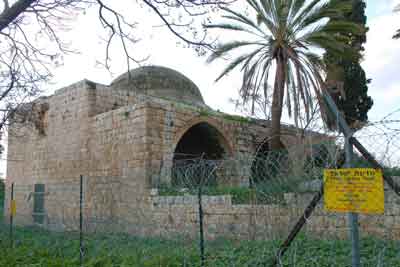 Not next year, not in Jerusalem: Israeli Palestinians' – and My Family's – Desire to Return Home

Winding through the Jewish Quarter of Jerusalem's Old City , past the grand arch of the destroyed Hurva Synagogue en route to the Western Wall, most passersby miss the Tifereth Israel synagogue. What they don't know is that where now lies a pile of ruins that gathers animal droppings and tourist trash, once stood the tallest building in the Old City .

Tifereth ("The Glory of Israel") was built in the 1860s by my five-times great-grandfather, Nissan Bak, one of the leaders of the Hasidic Jewish community in the Old City . Nicknamed by local residents the "Nissan Bak Shul," the formerly domed, majestic synagogue is now reduced to white-gray walls humbled beneath plaster molds that prevent further deterioration, broken stone steps, and, in what was a basement, a pit of rainwater in which a years-old collection of weeds and debris swim uninterrupted.

According to family legend, the builders of the synagogue ran out of money before they could build the roof. On a tour of the Old City right around that time, Austrian Emperor Franz Josef saw the roofless synagogue and asked what happened. Without missing a beat, my five-times great-grandfather replied, "He has taken off his hat in honor of your visit." Pleased by the compliment, the Emperor funded the construction of the dome.

In 1948, during the Jordanian siege of Jerusalem in one of the battles that led to Israel's declaration of independence, Jewish soldiers, fighting for their lives and control of the city, used the synagogue as a fort, and the Nissan Bak Shul was bombed, becoming a casualty of war. After Jerusalem fell and my ancestors were led out of the Old City by the British, the Arab Legion dismantled most of the synagogue and used the stones for other construction projects.

Several hours north, in the lush green of the northern Galilee , lies the ruins of another holy building. A dome still covers the stone mosque and, at first glance, the walls seem to be intact. Closer inspection reveals green vines climbing down the walls and patches of growth that have moved in where the stones have fallen out. Three white, stone arches gape wide, and a garden of weeds has flourished below. The mosque is enclosed by a fence and two rows of barbed wire.

Standing before me is the mosque of El Ghabsiya, the one structure that remains of a destroyed Palestinian village.

If I had not traveled with Dahoud Badr, a refugee from El Ghabsiya, and coordinator of the Association for the Defense of the Rights of the Internally Displaced Persons in , I would have never known that the earth beneath me used to hold the foundations of a small village.

The mosque of El Ghabsiya seems out of place among a few old trees and scores of saplings. Abu Badr, a white-haired man with an eagerness to please, brings out a map to point to the location of his family home. I realize I am standing on it and shift my feet slightly, as if I can avoid walking on what I cannot see. Where the homes of family members stood, fledgling trees planted by the Jewish National Fund struggle to put down roots.

Abu Badr was six years old in May 1948, when the Israeli army attacked his village and expelled its residents. According to him, village authorities had made a pact with Jewish militia leaders not to attack the village, but months later, after 's declaration of independence, the agreement was effectively nullified.

"Early morning," he tells me, in a mixture of English and Hebrew, "my mother woke me and told me to wait for her outside the house. She took some things...and quickly we left the village. I was there crying. It was difficult for me to [walk] in the mountains. My uncle returned and told me [what was happening], held me, and we continued. Afterward, maybe I slept, I don't know. When I woke up, we were in Kufr Yassif [a nearby village]."

Badr's family moved several times before returning to El Ghabsiya in the end of 1948. In January 1950, the Israeli Army returned and ordered the inhabitants to temporarily relocate to another village for military purposes. After the initial two-week relocation, inhabitants repeatedly tried to return to their homes. Each time, they were turned away.

Residents of the village appealed to the Israeli Supreme Court, and on November 30, 1951, the Court ruled that inhabitants did have a right to return. Since then, though, Israeli forces have consistently impeded their homecoming. In 1956, bulldozers destroyed the homes of the small agricultural village, leaving behind only the mosque that was once the village centerpiece.

Although most Palestinian villages did not petition the Supreme Court or win a favorable court ruling when they did, the saga of El Ghabsiya features elements of commonly heard stories of Palestinians fleeing by force, fear, or a mixture of both.

According to Nihad Boka'ee, coordinator of the Research, Information, and Legal Advocacy Unit of BADIL (meaning "alternative," in Arabic) Resource Center for Palestinian Residency & Refugee Rights, a Palestinian NGO that researches and provides resources on questions around Palestinian refugees, the inhabitants of 531 Palestinian villages were displaced and the villages have since been destroyed, abandoned, or are currently inhabited by Israeli Jews. According to BADIL, of approximately 726,000 Palestinian refugees, 274,000 left their villages in 1948 and remain within proper. An additional 150,000 Palestinians were internally displaced after the 1967 War.

Despite the fear that Jewish Israelis might be displaced by internally displaced Palestinians wanting to return to their old villages, the majority of them—85 percent, quotes Boka'ee—remain empty and unused.

In 1995, frustrated by years of petitioning the government to allow them to return to El Ghabsiya, Badr and others decided to restore the neglected mosque and to begin praying there every Friday. Not long afterward, the Israel Land Authority (MMI, according to the Hebrew acronym), which manages all government land, found out and blocked off access to the mosque with fences and barbed wire.

The single row of barbed wire put up by the first visit of the MMI did not keep the residents of El Ghabsiya from their weekly prayers and activities. By now, though, countless visits later, it is nearly impossible to cross the wires to get to the mosque.

The site is declared a military area, albeit one populated by young trees and a dramatic green and brown landscape. Lacking any signs of heightened security or military presence, it is unlike any military area I've ever seen.

Although most holy places have been destroyed along with the homes of the Palestinian villages, El Ghabsiya is not alone in the survival of its mosque. Eitan Bronstein, director of Zochrot ("Remembering"), an Israeli organization that educates Jewish Israelis about Palestinian narratives of 1948, recounts the story of Al Majdal, which became the museum for the history of the ancient Arab/Jewish port city of Ashkelon . Nowhere in the museum, Bronstein says, is there recognition that the building used to be a mosque.

In Ein Hod, a popular Jewish Israeli artist colony, also located in the Galilee , the old mosque has been transformed into a restaurant/bar. Meanwhile, the town's former Palestinian inhabitants live several kilometers away, off a steep and muddy road in upper Ein Hod, which they established half a century ago after fleeing from their homes. Only recently, after much petitioning, did recognize this village, thereby granting them the right to paved roads, electricity, and schools.

In Birem, a destroyed village near the Lebanese border, former inhabitants are allowed to return to the remaining church to restore it, pray, and bury the dead in the nearby cemetery. Despite a court ruling that granted them, too, the right to return, Israeli authorities have thwarted their progress.

"There is an [agreement] between us and the government," remarked Afif Ibrahim, secretary of the Birem Committee, in an interview. "You can return dead, but not alive."

Once Upon a Time in Jerusalem

Where many in my family hesitate to rebuild the once grand Nissan Bak Shul because of the expense, the residents of El Ghabsiya have far more than their life savings to contend with. No loose change jar could win them the approval of the Israeli government.

As much as I want to draw parallels between the stories of these two holy places, both casualties of the battles of 1948, I realize that mine is the party that sits on the side of the mighty. The residents of El Ghabsiya have fled to neighboring towns within , and to the West Bank and .

So why return now, over 50 years after leaving? Already an old man, Badr says he speaks for his family when he asserts, "It is a question of rights. It is my right. I want to have the right. Maybe I don't want to come back, but I must have the right according to human rights law."

As Badr shows me his mosque, I am reminded of my visits to the Nissan Bak Shul with a mixture of pride and sadness. But I usually look at the ruins as a touching reminder of my family's history and homeland. In Badr's visits to the mosque in El Ghabsiya, he is reminded of his community's yearning to return home.