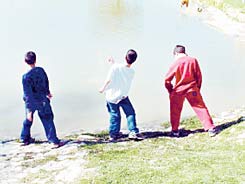 The Civil Administration in Judea and Samaria will post signs in the area of Canada Park to mark the memory of the Palestinian villages Yalu and Imwas, which existed in the area of the park and were destroyed in 1967 – so the attorney general informed the High Court recently.

The attorney general's message came following a petition submitted to the High Court of Justice by the organization "Zochrot," which works to commemorate the memory of the Palestinian villages that were destroyed in 1948 and to promote the materialization of the right of return of the Palestinian refugees. The Jewish National Fund, which manages the park, informed that it does not oppose the posting of signs, in accordance with professional and aesthetic considerations.

Eitan Bronstein, director of Zochrot, said that the messages by the Civil Administration and the JNF are a "step in the right direction," but added that the organization will insist that the texts of the signs will be drafted to their satisfaction. The text suggested by the organization includes the number of residents of the villages, and the present location of the refugees from the village. The JNF has indicated that the management of the fund will discuss the manner in which the signs in the area of the park will be posted.

According to Bronstein, the organization attributes special importance to the commemoration of the villages in park, since it is a recreational area that represents to visitors detailed explanations about different historical periods, while ignoring the history of the Palestinian villages dating back hundreds of years. Bronstein expressed hope that the JNF will work to commemorate the memories of Palestinian villages also in additional sites under their management. He noted as an example the southern Carmel region, in which the villages of Jaba' and Ayn Ghazal existed. The JNF has responded that the southern Carmel region is not under their management, but is managed by the National Parks Authority. Until now the Zochrot organization has posted signs at tens of sites across the country, at which Palestinian villages existed in the past.