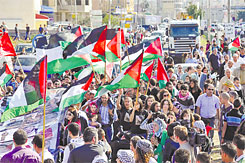 The government is trying to track down Arab teachers who took a day off on Land Day this year to protest Israel's treatment of the Arab population. Critics have denounced such a move as being tantamount to persecuting the teachers for acting within their civil and democratic rights.

Principals of Arab schools received a letter from the Education Ministry on Land Day, held on March 30, asking them to immediately "report the names of teachers who were present in the schools and of those who were absent."

The ministry also wants to know whether classes took place that day - and if not, why. Furthermore, teachers in several schools in Lod reported that ministry officials conducted surprise visits that morning and checked which teachers were absent.

"We felt like we were under a military regime," said one of the teachers. "Like they were searching for criminals."

This year marked the 35th anniversary of the first Land Day in 1976, when six Israeli Arabs were killed in clashes with security forces while protesting the seizure of land in the Galilee.

"Land Day is not included on the list of sabbatical days set by the Education Ministry, and the ministry released a directive on the eve of that day, saying that classes should be held as usual," the ministry said in a statement. "Schools, including Arab schools, must conduct themselves in accordance with the law and the regulations set by the ministry."

In a letter to Education Minister Gideon Sa'ar, however, Israeli Arab leaders declared that participating in Land Day protests is well within the rights of their population.

Land Day "represents the just struggle against the policy of expulsion, discrimination and subjugation," wrote Ramez Jaraisi, chairman of the Committee of the Heads of Arab Local Authorities, and Hala Espanioli, who heads the Higher Arab Monitoring Commitee's subcommittee on education. They added that Arab teachers were being persecuted for taking part in Land Day demonstrations.

"We want to emphasize that it is within the full rights of the Arab population, as a national minority and as equal citizens, to hold a strike to protest the policy of discrimination and home demolitions, as well as upsetting racist trends that have been gaining momentum in the country," they wrote. "A collective strike of minority citizens has an important educational message, from which the majority can also learn."

While local Arab leaders called for a general strike this year, as they have in the past, to mark the day, most Arab teachers did show up for class - although there were a few in almost every school who did not appear because of Land Day.

This isn't the first year teachers have felt too cowed to participate, said a longtime teacher at an Arab school in the north.

He said teachers had previously worried that someone would inform on them if they took the day off as part of a protest, and argued that teachers who choose to be absent aren't behind the call for a strike and are merely heeding the call of community leaders.