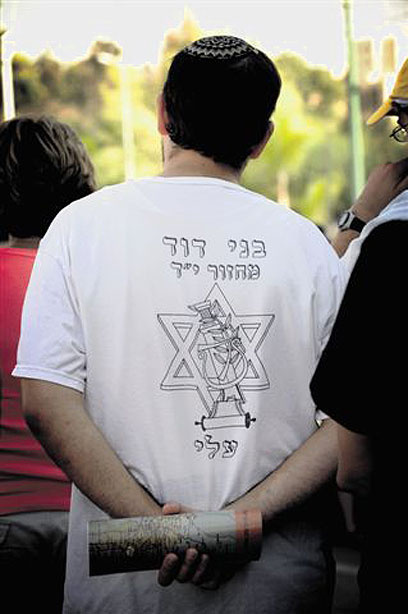 They went from house to house, from alley to alley, stopping again and again to tell the story.  Thus, in total silence, 40 current and former residents of Lod, Jews and Arabs, participated in a memorial procession organized by Zochrot through what it calls “Lod’s Nakba.”  The tour referred to what occurred in July, 1948, when the town emptied of its Arab residents during “Operation Dani,” commanded by Moshe Dayan.

“Lod’s story is one of the toughest ones.  A cruel expulsion, ethnic cleansing, murder and capture of the town,” according to the guide, Umar Al-Ghubari, whose harsh words left many participants open-mouthed, awaiting an explanation.  “The Nakba hurt the residents of Lod more than anyone.  Most of them were farmers.  Lod’s lands extended to Ramleh and Abbasiyya (today’s Neve Monson – MZ).  The airport is also on Lod’s land, a very valuable fertile area.  The residents of Lod were expelled and reached Ramallah and its surrounding villages; they weren’t able to find other jobs.”

This was my house
The tour began opposite the town hall, which had originally been owned by the Masih or the Alsabah family before it was renovated, adding upper floors.  An old woman, Diana Abu Tabih Karkar, arrived, unable to contain her emotions.  “In 1948 I lived here with my husband and his family,” she said, pointing to the building to the left of the town hall.  “The Jews expelled us from our home; we rode toward Ben Shemen, but the soldiers returned us to Lod.  We were forced to live for a year in the Orthodox church, forbidden to approach our home.  When we asked to go back we found that Jews had been moved in, so we bought it from them.”

Rita Muneir Boulous, from Lod, was one of those on the tour; she now lives in Neve Shalom (she’s the mother of Raneen Boulous from the “Big Brother” TV program).  She said:  “It took my grandfather dozens of years to regain our house.  He simply paid to get his own house back.”

Al-Ghubari joins the discussion, backing up what Boulous says and adding more details:  “In addition to the house her grandfather bought twice, her father played an important role during those events.  He was a bus driver who transported the wounded from different locations in town to the hospital.  Some families avoided expulsion thanks to that hospital, where they hid.  The building still exists; it’s known today as the St. George School.”  As everyone looks at the former hospital, Al-Ghubari places a yellow sign reading:  “The 1948 ghetto.”

Memories of home
One claim that upset many of the tour participants had to do with tasks imposed on young Arab inhabitants of the town.  “They were ordered to gather the bodies of people killed in a massacre, and those killed in the streets, and bury them,” said the guide.  “Some, who’d been burned in the ‘Dahamsh massacre,’ couldn’t be buried.  Some of the young men were even taken to renovate the houses which were given to Jews.  The tragedy of the entire town has been distilled here.”

Dahamsh is the name of the mosque in the old town.  According to the story, parts of which have been published by Zochrot in a booklet, Palmach fighters killed about one hundred Arabs who hid in the mosque.  One fighter even admits firing a shell into the mosque.  “One was enough,” he said.  “Then I opened the door, looked inside and closed it. The hall was empty; they were all against the walls.”

The mosque, it should be noted, was closed until 1996.  Four years later the Moslems in town were again allowed to pray there.  These stories, along with some of the interviews broadcast later, distressed some participants.

Khuria Alsa’adi, a social activist from Lod, said that the building once belonged to her grandmother, the only midwife in the area.  “I remember visiting my grandmother, peeking through the peephole to watch her at work.  She’d yell at us and we’d run away,” she said, smiling.

Alsa’adi’s account also reminded Boulous of the past.  “I really miss my father, his stories, the old Lod.  We were very close,” she says.  “When I come to Lod today I feel like a stranger even though I love the town very much, despite all its faults.  I joined the tour to learn new things about my town, and also to welcome people who come to visit it.”

Toward the end of the tour, however, an incident occurred involving some participants from the Gar’in Torahni.  Everyone entered the Hadash branch office to watch the video testimonies of Palmach combatants who’d taken part in the capture of the town in ’48, except for two Gar’in members who weren’t allowed in.  “We very much appreciated how we were welcomed respectfully during the entire tour, until that moment.  Apparently they ran out of patience.  Everyone, Jews and Arabs, entered the branch office, but when we tried to go in they told us members of the Gar’in Torahni weren’t welcome,” said Yossi Londin.

Here’s what he had to say about the information the tour provided:  “They presented things in a distorted manner, out of context.  When you talk about the massacre of civilians, it sounds as if evil soldiers shot civilians for no reason, but what they didn’t say was that 200 fighters were surrounded by 40,000 residents of the town who were all shooting at them, and that was the only way they had to save themselves.”

Zochrot’s response:  “We would have preferred that they had also been admitted and participated in the activity, whose purpose was to influence how Israelis view the nakba.  We tried to get them in but weren’t successful because of time pressures and the situation; we invited them to visit us at the end of the  month in order to view not just one testimony, but all 30.”

The Hadash branch apologized for the incident.