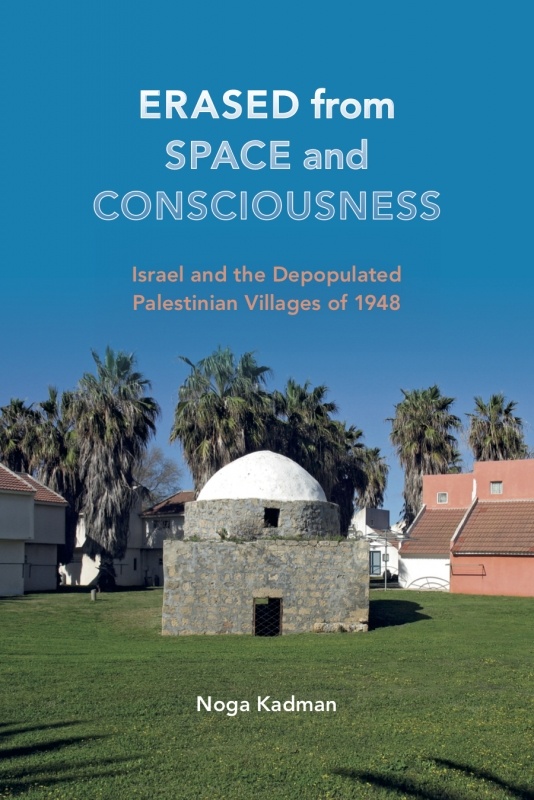 Erased from Space and Consciousness: Israel and the Depopulated Palestinian Villages of 1948
(English Edition)

Hundreds of Palestinian villages were left empty across Israel when their residents became refugees after the 1948 war, their lands and property confiscated. Most of the villages were razed by the new State of Israel and in dozens, communities of Jews were settled—many refugees in their own right. The state embarked upon a systematic effort of renaming and remaking the landscape, and the Arab presence was all but erased from official maps and histories. Israelis are familiar with the ruins, terraces, and orchards that mark these sites today—almost half located within tourist areas or national parks; but they rarely receive any official information about the Arab communities that existed there, and about how they came to be depopulated and ruined. Using official archives, kibbutz publications, and visits to the former village sites, Noga Kadman has reconstructed this history of erasure, which supplemented the physical destruction of the villages.

-----------------------------------------------------
"Poignant, sensitive, and compassionate, Kadman’s deeply-informed inquiry exposes graphically the process of 'demographic Judaization' of Palestine, in physical reality and cultural comprehension. It is an invaluable contribution, particularly at a moment of reflection and reassessment that might offer some hope of escape from a further plunge into darknes--if there is an honest and courageous engagement with what has been done and why, and how some measure of healing might yet emerge."
―Noam Chomsky

"This remarkable book examines how the issue of the Palestinian villages whose inhabitants were expelled in 1948 has evolved in Israeli consciousness. Kadman looks at official Israeli discourse, kibbutz and moshav diaries and records, and the maps produced by the Israeli state to show in disturbing detail how the dispossession of the population of over 400 villages, most of which have since been destroyed, has been largely eliminated from the imaginary of most Israelis."
―Rashid Khalidi

"An excellent, original, and important work [that] will immediately become a textbook for courses in the US and elsewhere."
―Ariella Azoulay, Brown University

Noga Kadman is a researcher and tour guide, exploring the encounters of Israelis with the Palestinian presence in the landscape and history of the country. She co-edited Once Upon a Land: A Tour Guide to Depopulated Palestinian Villages and Towns (in Hebrew and Arabic).