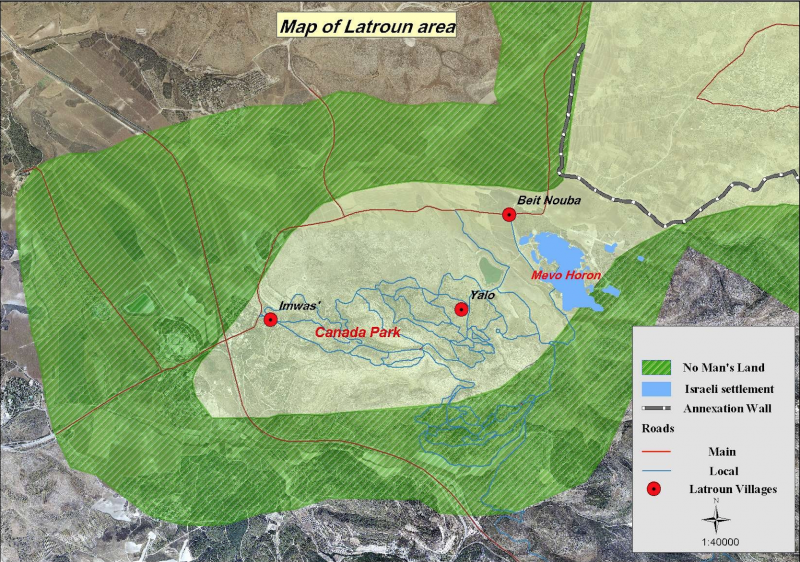 Where the villages stood
ISRAEL’S CONTINUING VIOLATIONS OF INTERNATIONAL LAW IN OCCUPIED LATROUN, 1967-2007

2007 marks the 40th anniversary of Israel’s belligerent occupation of the West Bank, including East Jerusalem, and Gaza Strip, together comprising the Occupied Palestinian Territory (OPT), with the meaningful exercise of the right of the Palestinian people to self-determination seeming increasingly distant. The pillar on which the law of occupation rests is that an occupying power is vested with only a temporary authority in order to preserve the status quo and minimise disruption of the lives of the occupied population until the occupation ends. In the case of Israel’s prolonged and continuing occupation of the OPT, however, the danger arises that the occupation has become the status quo itself. The legality of such an occupation is therefore highly questionable, especially in light of the fact that the current Israeli occupation regime, in the formulation and implementation of its practices and policies, “has acquired some of the characteristics of colonialism and apartheid.”

In the 40 years since a “messianic, expansionist wind swept over the country” of pre-1967 Israel, its occupation of the OPT has developed into an institutionalised regime of systematic oppression and control. This has reached its nadir since the outbreak of the second Palestinian intifada in September 2000, with pervasive human rights violations becoming increasingly endemic and grave breaches of international humanitarian law increasingly rife. Israel’s ‘land grab’ policy, however, has been consistently prevalent since the moment its troops entered the West Bank in June 1967.

Israel’s appropriation of Palestinian land following the Six-Day War in June 1967 amounted to some 400 square kilometres pilfered from displaced persons and refugees. Palestinians in ‘border areas’ close to Israel were then, and continue to be, particularly vulnerable to land expropriation, property destruction and arbitrary dispossession. Nowhere was this more evident than in the three villages of the part of the West Bank known as the Latroun salient, which protrudes into Israel roughly 20 kilometres north-west of Jerusalem. In 1967, those villages – ‘Imwas, Yalo and Beit Nouba – saw their entire populations of just over 10,000 people forcibly transferred, their houses and buildings completely levelled, and their land appropriated by Israel.

That the Latroun area of the West Bank has been targeted since 1967 for effective annexation by Israel is clear from the actions of the Occupying Power in establishing what it hopes will be irreversible ‘facts on the ground.’ A variety of means – appropriation of land, destruction of property, direct and indirect forcible transfer of people, implantation of settlements – have been employed in Latroun and elsewhere to achieve the same end: the establishment of absolute Israeli control over significant tracts of Palestinian land. For reasons that will be elucidated in this study, it is submitted that the Latroun area was targeted by Israel even before the occupation of the West Bank began.

Seeking to demonstrate the link between the policies initiated by the Israeli occupying authorities in 1967 and continuing in 2007, this study examines some of the defining attributes of Israel’s occupation of the Palestinian territory through the lens of the Latroun villages. Drawing on field documentation and historical research conducted by Al-Haq, the study first intends to provide a comprehensive factual account of what has happened in ‘Imwas, Yalo and Beit Nouba since June 1967. In this regard, assistance from Israeli organisation Zochrot in uncovering documents in Israeli political and military archives, as well as conducting interviews with former Israeli soldiers who participated in Israel’s military operations in Latroun, proved invaluable.

The purpose of the legal analysis component of the study is to assess the legality, under international law, of the practices adopted by Israel in the Latroun villages, in particular property destruction and population transfer, and the subsequent appropriation of the land of those villages in order to pursue its own settlement construction and territorial annexation agendas. Where such actions amount to violations of international law, certain legal consequences arise – the rights of the residents with respect to their land; the responsibility and obligations of Israel and its individual agents for the perpetration of violations, as well as of those third parties whose acts or omissions render them complicit in illegal acts; and the legal duties incumbent on third states and the international community with regard to upholding international law. The study will also seek to explore whether the forcible transfer of the residents of the Latroun villages, who remain displaced to this day, can be said to amount to an ongoing or continuing crime under international law.