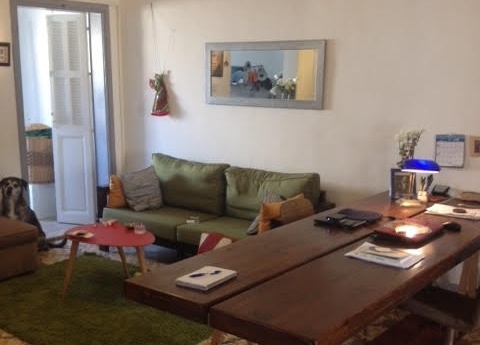 HISTORICAL RESEARCH SUMMARY
The House on 17 Dante St., Yaffa
2015, May
Share it

Architect/construction engineer: The engineer who supervised a renovation late in the house’s history, in 1946, is called Ibrahim al-Novany. The name may be seen in the Arabic documents attached to the documentation file.

Owners: Al-Gindy family. The first name mentioned in an application for a permit to renovate the house and build another floor is Rajeb al-Gindy; subsequently, his son Ahmed applies for permit to add another bathroom and plumbing, and expand the upper floor. The owners’ names and their applications (including structural plans) can be seen in the file.

The street’s pre-Nakba name is unknown, and perhaps it didn’t have any, since this is a relatively small street crossing Jerusalem Boulevard. According to a 1918 map, the name Gaza Road was given to what is today Yefet Street, while the al-Gindy house used to be located in an orange grove. With the years, the city grew and transformed, and the orchards became part of the urban landscape. By 1936, when Rajeb asks to renovate the house and add a floor to it the orchards must have shrunk and gave way to the city. The Bibi family residence, for example, on 13 Gaza St., was previously used also as a well house.

Neither the documents in the municipal files nor local historians or Palestinian witnesses we have interviewed could tell us the pre-Nakba names of Dante and Gaza streets.

After the 1948 war, the house was appropriated by the Israeli Guardian of Absentee Property (Document 1523), which entrusted it with the Ministry of Defense. Since then and until the early 1970s, it was used by the Israeli Security Agency (Shabak). The first floor was used for training courses, and the second was the home of senior ISA officials and their families, including former ISA chiefs.
In the 1970s, the house was given to the Amidar subsidized housing companies, and the tenants housed there paid it reduced rent (see file documents). In the late 1990s, Amidar sold the apartments in the building. Those on the bottom floor were bought by a family of Palestinian Israeli citizens who had arrived to Jaffa before 1948 and remained after the deportation. The upper floors were bought by Israeli Jews.

The ownership is split between Palestinian and Jewish Israeli citizens. The exhibition is held in the Jewish-owned section of the building.