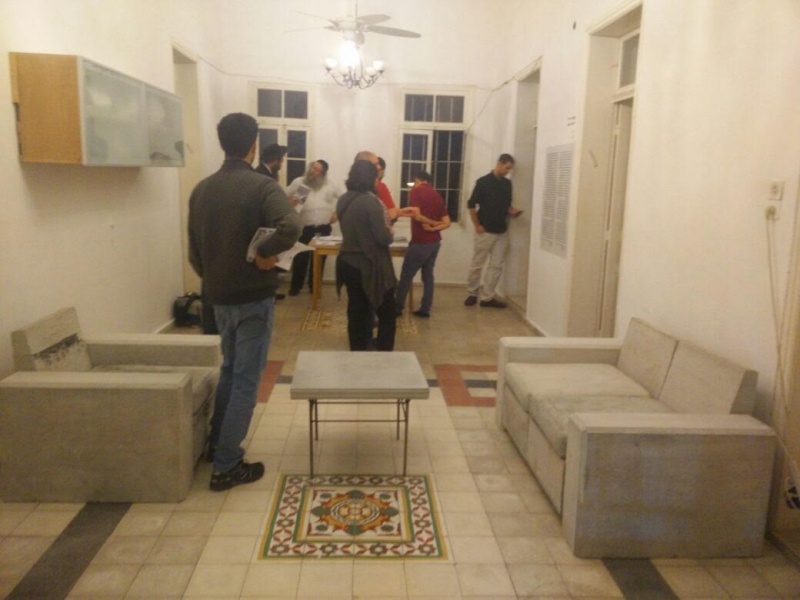 HISTORICAL RESEARCH SUMMARY: The house in Raziel 3, Yaffa
Houses beyond the Hyphen: Open Houses, Exhibitions and Tours in Yaffa - 14-16.5.2015
2015, May
Share it

Street name: Bustrus.
Owner: Najib Bustrus. Prior to and in 1948, the building housed goldsmith shops on the street level and temporary tenants on the upper levels. The Bustrus family remained the owners.

The municipality file has no record prior to 1950. We have therefore contacted local Palestinian historians and contemporary witnesses still living in Yaffa despite the Nakba for information about the building.

The ground floor of the building housed upscale and high-quality goldsmith shops. Above them lived families who rented apartments from the Bustrus family. The complex was undoubtedly owned by Najib Bustrus, because he had built this entire section of the streets. The tenants of the floors above the shops were people who had arrived from out of town, and therefore they came and went every few years, so no specific name comes to mind.

The Sursuk residence was built in front of the house, and the Batta shoe store was located in one of its entrances, in what used to be 71 Bustrus St. This was a very chic store. The witness remembers window-shopping there with his father as a child.

On the corner of Bustrus Street and today’s Hado’ar Street were famous button shops owned by the Dabas family. There was also Jabadi’s famous ophthalmology clinic. On the other side of today’s Hado’ar Street, right on the corner of Bustrus, was the barbershop of the witness Abu-‛Atalla’s father. Next to it, in a building with four large doors, was Ged‛un Coffeehouse. Across from the barbershop worked a member of Al-Kutub family who specialized in calligraphy and handmade signs. Bustrus street was where all the best stores and offices were, of the most renowned professionals, including lawyers, photographers, tailors, engineers and doctors – all
famous and highly sought after. For instance, the Vinus photography studio was located in one of the building. All the finest shoe, clothing and jewelry stores were on that street.

In front of the building in today’s 3 Raziel Street, in Sursuk House, was the shop of the famous tailor Halil Falah, who also headed Palestine Enterprise Company for real-estate investments. He became a refugee in Beirut and continued his business activities there. The Jday and Dajani families had a pharmacy in the same house, like the one still extant on Yefet Street (the famous Green Pharmacy), only this was a magnificent pharmacy. It also housed the pharmacy of Dr. Dajani who was later expelled and reopened his clinic in Beit Hanina (in today’s Palestinian East Jerusalem). The other co-owner from Jday family was deported – his granddaughter lives in London.

Haim Mutru represented the Jewish business owners on Bustrus Street until the Great Arab Revolt against the British in 1938-39. After that time, no Jewish businesses remained on the street – they all moved to Tel Aviv. Before the revolt, they used to rent the store spaces from the Bustruses or other wealthy families who owned the buildings along the street. Professionals and businessmen who had offices and shops on the street include Yusuf Salah and Musa Abu-Jbein – construction engineers; and al-‛Amein and Haddad – taxis to Beirut. Local historian Sami Abu-Shehade told us that Bustrus street was mostly owned by Najib Bustrus, a Maronite Christian businessman originally from Lebanon. As for tenants who rented apartments or shops in his building, until the 1930s these included Zionist organizations who rented from Palestinian tenants or directly from Bustrus himself. Following the 1929 Palestine Riots and the subsequent Great Arab Revolt of 1936-39, no Jewish tenants or lodgers remained on the street. By the
1940s, the entire street was either rented or owned by Palestinians.

A historical abstract of title for 3 Raziel St., sub-parcel 2, indicates that the house belonged to the Israeli Development Authority, that, is to the Custodian of Absentee Property whose lands were managed by the authority, and it was the latter which leased or “lent” buildings to public housing companies, in this case Amidar. New Jewish immigrants were housed in the building and the Custodian rented out the street-level shops.

Document we located from 1967, indicates that the apartments were transferred to Amidar’s management on some unknown date. In 1986, the municipality demanded that the houses be demolished for safety reasons. In the end, they were not demolished and in 1995 part of the building was renovated. Some of the apartments in the building were owned by the Development Authority and some of those were sold by 2013. Today, the homeowners as well as the tenants are all Jews.

Bustrus is located along the historical Nablus Road, and was known as Yaffa’s central and most prestigious business artery. The road stretched from the Clock Tower Square towards the northeast, up to the German Templer colony Sarona in today’s Tel Aviv, and from there to Nablus. The street was paved in the late 19th century and inaugurated probably in 1886 under the name Rue Nagib Bustros. It stretched from Djemal Pasha (today’s Jerusalem) Boulevard to the square. Most of the buildings along the eastern section of street were owned by the Bustrus Family.

Its western section used to be called Iskander ‛Awad, after another Christian Maronite businessman of Lebanese descent (also called Alexander Howard) who built numerous buildings along that section. ‛Awad was one of the richest men in Yaffa, and one of his best-known buildings was a hotel inaugurated in 1892, called Beit ‛Awad. Remnants of the magnificent hotel have survived, such as the Hebrew inscription Shalom al Yisrael (Peace for Israel) above the entrance to the hotel (Raziel 15), that may be explained by the fact that ‛Awad was a Free Mason. ‛Awad was also the local representative of the famous Cook travel agency whose offices were adjacent to the hotel.

Another late 19-century hotel on the street (Raziel 7) was the magnificent Kaminitz Hotel, where Theodore Herzl stayed during his visit to Palestine.

Sursuk House was located on today’s 4-6 Raziel Street – in front of Najib Bustrus’s property. Its construction began in the early 1920s and it was inaugurated in 1925 by the British High Commissioner Lord Plumer. The Sursuks were a wealthy Maronite Christian family from Lebanon who were known throughout the region and owned extensive land properties in Palestine. It also bought other buildings along the street.

The prestigious building was owned by the family until 1948, and was the most fashionable business venue in town. Behind its impressive colonial front were the offices of some of Yaffa’s greatest merchants, shipping companies, and real-estate dealers. It also housed several foreign consulates, including, in the mid-1930s, those of Spain, Switzerland and Sweden.

Until the 1930s, Jewish business owners also had shops and offices in Sursuk House and along Bustrus-‛Awad Street in general. These included Tel Aviv’s first mayor Meir Dizengoff’s shipping company, and Yehuda Bloom’s orange delivery agency. Following the 1929 Palestine Riots and the subsequent Great Arab Revolt of 1936-39, the Jews abandoned the street and only Palestinian, Lebanese, Egyptian and other merchants remained.

After 1948, the building was appropriated by the Ministry of Defense, and used for various purposes. For example, from 1974, it housed the offices of the IDF’s canteen service (Shekem).

The house was part of the "Houses beyond the Hyphen" project to take place in Yaffa between the 14-16/5/2015 in commemoration of the Nakba Day. The exhibition "Transgression" by the artist Mahmoud Kais was exhibitied in the house during those days.