Home / Testimonies / Aida Najjar, former resident of Lifta
After 1967 I went back. But it made me sad, it´s such a beautiful country. It´s like a paradise lost. When they asked me again to go there I said no, because it made me so sad I became sick. I blamed myself for going to see the house in Lifta. I had a bea 26/06/2013 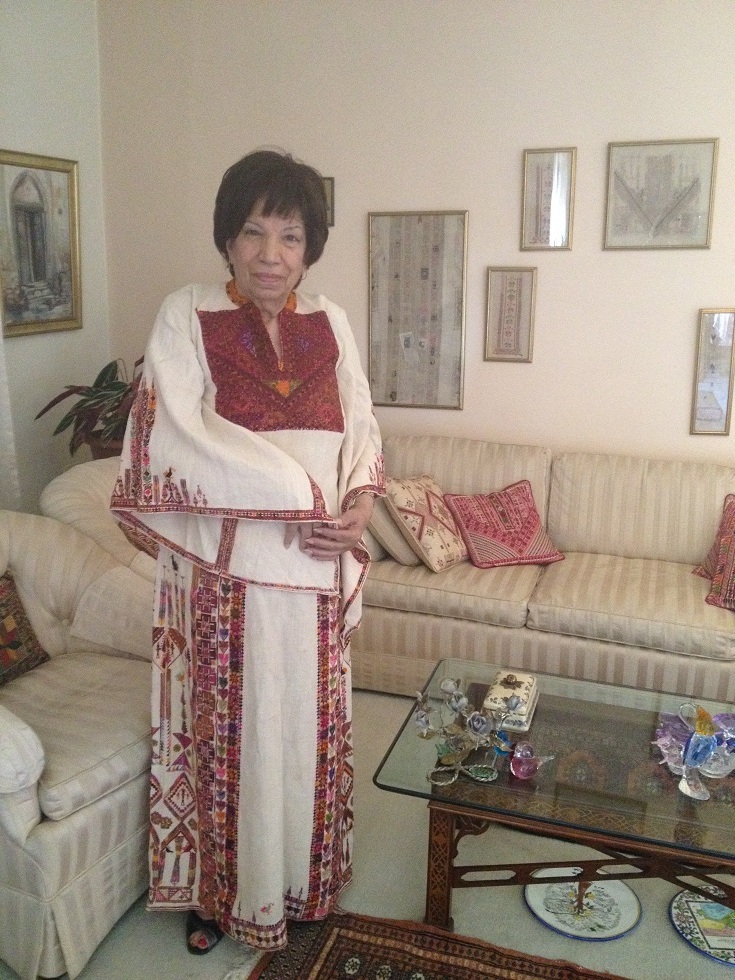 Aida Najjar (AN): My childhood was in Lifta, I´ll never forget it. My house was beautiful; it was made of white stone, with red roses on the stairs. It was near the Schneller farm, in Upper Lifta.  I can´t forget playing underneath the roses. Near our house was the Schneller forest. There was a farm and a German school there. A lot of the men from Lifta went there to learn carpentry.When we were children we would collect the white flowers and give them to our teachers. They would say ´Here are the girls of Lifta!`. In the city you don´t find these flowers, so the girls from Lifta were well known for their flowers. I remember that we preferred to walk to school so we could look at the trees and the souk. Before the war we were living in peace, dreaming of the best possible future.

AN: Yes. As children we were dreaming about growing up and serving our country. I always wanted to be a writer. We were living peacefully, until right before the war, suddenly the attitude of some of the Jewish people changed. People got scared after the DeirYassin massacre. They wanted to frighten us, they had a microphone and went around saying that if we wouldn´t leave we would be killed like in DeirYassin. They scared us so much that we left. We had to go through the valley, walking until we reached Ramallah. We lived in Atori (Abu Tor), in Jerusalem for a while, we thought it would be safe there but instead a few months later we had to leave again. That was the time we moved to Jordan. My father had some money so we rented a house, but we couldn´t live in this kind of place after we left such a beautiful house. We went to Zarqa, where my father built a house.

LR: Did your parents bring something with them when they fled?

AN: When the war started we began moving our furniture to a safer place. The Jaffa road was still open then. But then things got worse, the man who moved our furniture got killed on the road. He was our neighbour. We had a piano at home, they say the Palestinians were not civilised, but we had a piano. As a child I went to music school. We took the piano with us, together with some light furniture and some clothes. We couldn´t bring our toys or books, it made me sad. But we took the piano.When they started threatening us with Deir Yassin we just fled. We could not take the rest with us. I wonder what happened to our things. We have the piano until now, it´s with my niece.

LR: What do you miss the most?

LR: What did the people living there tell her? Why didn´t they let her in?

AN: They said they came from Yemen and that the government put them there. They said it was their house and not ours. It´s so cruel… This bitterness is not easy to live with.

LR: Did you ever go back?

AN: After 1967, when I was working for the UN, I went back. But it made me sad, it´s such a beautiful country. It´s like a paradise lost. When they asked me again to go there I said no, because it made me so sad I became sick. I blamed myself for going to see the house in Lifta. I had a beautiful picture in my head, now it´s not the same anymore. No more garden, no forest, it´s now an industrial area. I blame myself because this beautiful picture I had, these beautiful memories, have changed. In history, when there were beautiful houses, they were taken care of. They ruined our house, they don´t want to keep anything of our memory...

LR: How is life in Jordan for the Palestinians?

AN: The Jordanian people were kind to the Palestinians, they welcomed and helped us. We have good friends here. In school we had a lot of projects about Palestine. The new generations will remember, no matter how long ago we left Palestine. Golda Meir said the Palestinians don´t exist. All our writing is just to show that we exist, and we should be able to go back. Children who are born in Amman still say that they come from Lifta, not from Amman. Palestine will always be our first lover.

LR: How do you see Lifta´s future?

AN: I´d love to go back and make the house a beautiful place, let roses grow on the stairs again. I can´t forget. Any cultural heritage should stay as it is, as an identity marker. What they are doing now is change everything, also here. You don´t find many people wearing the Palestinian dress. Even the poor women from the villages, bringing vegetables to the market, they used to look beautiful, now they look unhappy. Now you feel they are not happy.

LR: Do you still wear the traditional dress?

AN: Yes, it´s part of our identity, this embroidery is part of our culture. The women of Lifta used to sit and compete, about who made the best embroidery. When I was working for the UN, I wore these dresses to cocktail parties all over the world.

Preservation, planning and destruction Memory Palestinians re-encounter their villages Refugees' personal items Attitudes of Palestinians on right of return Lifta it's all about people