Commemoration: The 64th anniversary of the Dayr Yassin massacre - Report

On Monday, 9.4.2012, Zochrot organized a procession on the site of Dayr Yassin village, to commemorate the massacre of its inhabitants by Etzel and Lehi forces on 9.4.48.

On Monday, 9.4.2012, Zochrot organized a procession on the site of Dayr Yassin village, to commemorate the massacre of its inhabitants by Etzel and Lehi forces on 9.4.48.

Some 50 people, mostly Israelis, marched from 22 Kanfei Nesharim Street in Jerusalem’s Giv’at Sha’ul neighborhood.  Before the Nakba, Kanfei Nesharim Street ran from the Jewish neighborhood of Giv’at Sha’ul to the Palestinian village of Dayr Yassin, and was the main entrance to the village.  Dayr Yassin no longer exists today, and Giv’at Sha’ul, which lay to the east, grew and spread out over the village lands and the remains of its buildings.  The procession began by noting that in January, 1948, representatives of Dayr Yassin and of Giv’at Sha’ui signed a good-neighbor, non-aggression agreement, despite the confrontations between Jews and Palestinians occurring elsewhere in the country.  The documents recently uncovered in the Haganah archives demonstrate that the inhabitants of Dayr Yassin adhered to the agreement, and even resisted Abd al-Qadir al-Hussayni’s demand to place Palestinian fighters in the village to help defend it, because it would violate the signed agreement with Giv’at Shaul.  The April 9 pre-dawn attack on Dayr Yassin came from three directions - north, south and east.

Along both sides of the road to Dayr Yassin were fields and quarries belonging to the villagers.  According to the testimony of witnesses, the bodies of seven executed Palestinian prisoners were dumped in one of the quarries.  We walked toward the former village center, carrying three black plaques inscribed with the names of 93 of the victims.

Tall buildings and stores have been built on both sides of the road.  Still, some Palestinian structures from before 1948 remain.  The first one on the right belonged to the Radwan family, opposite the school for girls.  The building at 37 Kanfei Nesharim was one of those belonging to the Zahran family; others stood opposite.  There the Jewish attackers massacred about 30 members of the Zahran family.  We stopped to read aloud the victims’ names.

Israel turned the center of the village into the Kfar Sha’ul mental health center.  The area is fenced and entry is prohibited.  We walked around its outskirts and saw the Palestinian buildings.  The village center was the location of the horrible events of that April day in 1948 when some 100 civilians were murdered – men, women, the elderly and children.  We walked on HaRav Katsenelbogen Street, which adjoins the village center.  It was paved over Dayr Yassin’s cemetery.  Some remnants of the graves, difficult to see, can still be found by the roadside.  A young orthodox Jewish resident of the neighborhood approached us to whisper in the ear of one of the participants: “When I was a child, I played with bones I’d found not far from here.”  He confessed quietly, and joined our procession.

We arrived at the end of our route, behind the mental hospital compound.  Dayr Yassin’s residents fled west from there toward the Palestinian village of 'Ayn Karim.  The village of al-Qastal facing us is clearly visible.  There was panic in Dayr Yassin.  The inhabitants hid in their homes for two or three more days.  Some were saved, others murdered in their homes.  Etzel and Lehi fighters loaded dozens of prisoners, most of them women, onto trucks for a victory parade through Jerusalem’s Jewish neighborhoods.  Then they removed the women from the trucks near Jaffa Gate (Bab al-Khalil), took the prisoners back to the village and murdered them.

A Swiss Jewish artist who participated in the event recounted that an aunt of his had been hospitalized for thirty years in Kfar Sha’ul, in the center of Dayr Yassin.  She was a holocaust survivor.  After she died he decided to make a film about her and about Dayr Yassin.  He’d gone to Ramallah, met and interviewed refugees and also received permission to film inside the mental hospital compound.

One participant, who described herself as a descendent of an Etzel family, recalled that her family would talk about how the Haganah exploited the Dayr Yassin massacre to present itself as a moral and humane organization, as opposed to the Etzel, which split from the Haganah, and was presented as cruel and violent.  That’s how Ben-Gurion apologized for the massacre.

Another participant noted that Dayr Yassin wasn’t the only place that Zionists massacred Palestinians. There were massacres at ‘Eilabun, al-Dawayima, al-Lyd (Lod) and elsewhere. 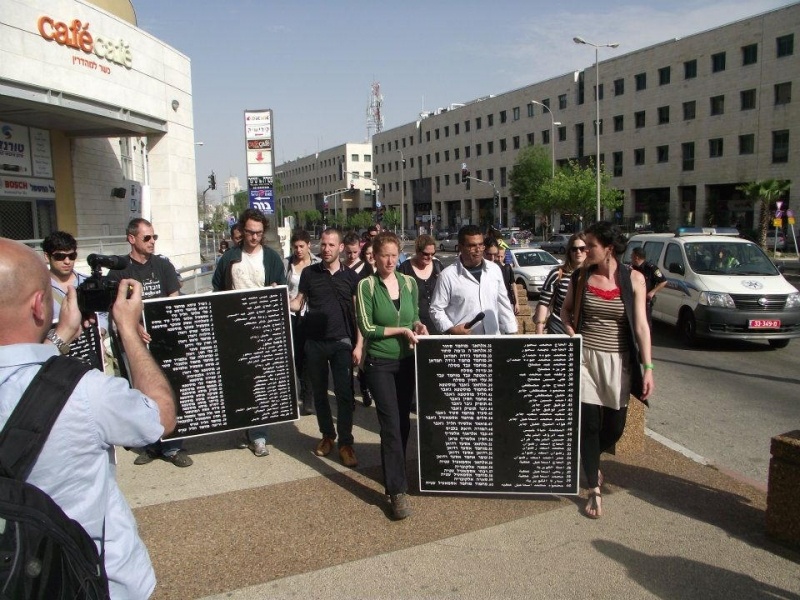