On Saturday, March 30, 2002, Land Day, we met at the side of the road that connects between Tira and Kfar Saba, a few dozen cars. We made our way between the orchards, across a large eucalyptus grove clearly visible from the road.

This grove, it transpires, harbors life and history inside it. As the Jewish National Fund was wont to do in that period in many other areas, in Miske, too, they planted trees in order to cover over the remains of the village. This is Miske – a destroyed Palestinian village, whose residents were uprooted in 1948 and whose houses were destroyed in 1952, after appeals by the residents to return were rejected.

About 50 of the displaced people of the village, members of the Shabita family from Tira, were among those who gathered in Miske on Land Day. We joined them, about 40 Jewish members of Zochrot. This was the first activity of this young organization, which aims to put the tragedy of the Palestinian people in 1948, the Nakba, on the Israeli agenda, in Hebrew.

The fascinating encounter that took place at the site was a combination of an educational tour and a commemoration ceremony, which together created a very special experience. The elders of the Shabita family led us between ghost paths of the village, pointing to houses of their friends and family, telling us about the gardens and the plots of land that no longer exist, and leading us to the village mosque, two walls of which remain standing as a monument among the eucalyptus trees and weeds. Suddenly a clearing appeared among the eucalyptus trees, where the village cemetery is located, as if the dead refused to be erased from beneath the forest. Later, at the side of the school which stands on the hill nearby, one of the family members told us the story of the village.

The village had a population of approximately 1,000 at the time the residents were uprooted, and they feared for their lives. This fear was implanted after neighboring Jewish villages – Ramat Hakovesh, Sde Warburg, and Mishmeret – with which the village had enjoyed excellent relations and even written mutual protection agreements, informed them that they would not be able to guarantee their safety. The residents of Miske left for neighboring Tira with the aim of soon returning to their homes. This plan did not materialize and most of them were exiled from the land. A minority remained in Tira thanks to Yaakov Duri, the first Commander in Chief of the IDF, with whom the villagers had friendly relations.

In these insane days, while each side counts its dead, it was an unusual and intimate experience of an encounter between Jews and Arabs who insist on striving for reconciliation, through recognition of the right of return of the displace people for a shared existence with their Jewish neighbors.

The gathering on the hill ended with a call to return to the same place on Nakba Day on April 17, 2002. On this day members of the family, descendants of Miske, will go up to visit the village together with us, members of Zochrot. As part of a project to post signs at the remains of Palestinian villages that were destroyed, a commemorative sign will be posted to state in a clear voice – We remember Miske. 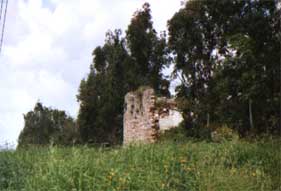