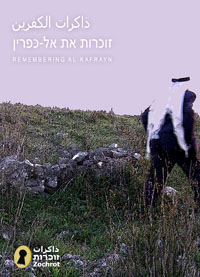 Excerpts from the booklet:

Al-Kafrayn was located in an open landscape of gentle slopes and shallow wadis. It was built on a hilltop surrounded by wadis that separated long, sloping hills, about 6 km north of Wadi 'Ara. A secondary road led northwest to the Haifa-Jinin highway (which bordered on Marj ibn 'Amir). Al-Kafrayn, which means "the two villages" in Arabic, was called Caforana by the Crusaders. In the late nineteenth century, al-Kafrayn had 200 residents who cultivated 30 faddans (1 faddan = 100–250 dunams). Al-Kafrayn was rectangular in shape, its longest side extending from eat to west. The residents, who were Muslim, built their houses of mud and cement and also maintained a mosque and a boys' elementary school that was established about 1888, during the Ottoman period.

The village lands contained about ten wells and springs. Its economy was based on cattle-breeding and agriculture. The primary crop was grain. In 1944/45 a total of 9,776 dunums were allotted to cereals; 147 dunums were irrigated or used for orchards.

Al-Kafrayn contained a number of ruins that revealed its long history, such as the foundations of buildings, columns, and tombs.

Zionist forces claimed to have occupied the village on 12 April 1948, and Arab Liberation Army (ALA) records indicate that Arab forces withdrew from an area just west of Al-Kafrayn the following day. The Palmach attack on al-Kafrayn was part of an operation launched after the battle of Mishmar ha-'Emeq. When Jewish Agency Chairman David Ben-Gurion and the Haganah command rejected the ALA's offer of a ceasefire in that battle, they also decided to attack and destroy about ten villages near the settlement, including al-Kafrayn, which, according to the New York Times, was the largest.

A 12 April Haganah broadcast was quoted by the New York Times as saying that it was the fifth village around Mishmar ha-'Emeq to be occupied by their forces.

Israeli historian Benny Morris reports that the village was partially destroyed during its occupation, but final demolition was postponed for a week, due to the Palmach's plan to use the village to train units to fight in builtup areas. On 19 April the Haganah General Staff was informed: "Yesterday company exercises in fighting in built-up areas took place south and east of Mishmar Ha'emek.

At the end of the exercises, the village of el Kafrin was blown up completely." Israeli Settlements on Village Lands No Israeli settlements are on village ands, but some of these lands are occupied by a military training camp.

The site and its surrounding area are divided between a military training camp and a cow pasture. A rubble-filled area has been fenced in and is covered with dirt, underbrush, and thorns. Almond, olive, and fig trees are scattered around the site.

Walid Khalidi, All That Remains: The Palestinian Villages Depopulated and Occupied by Israel,p. 169

"At the same time, southeast of Haifa, following Qawuqji's abortive assault on Mishmar Ha'emek, the counterattacking Haganah units, with the assistance of local settlers, systematically destroyed the surrounding villages. On 9 April, Golani units informed the brigade HQ and Carmeli Brigade HQ: 'Our forces are fighting in ... Mansi ... [and] are in Ghubiyya al Fawqa and [Khirbet] Beit Ras ... We are preparing to destroy the villages when we evacuate them.' That night, Palmah forces destroyed Ghubiyya al Fawqa.

On the night of 11 April, the Palmah's First Battalion entered and blew up 30 houses in al Kafrin and houses in nearby Abu Shusha.

On 15 April the last of Abu Zureiq's houses was demolished. Khirbet Beit Ras, al Mansi and al Naghnaghiya, to the southeast, were also leveled. Lajjun, south of the kibbutz, was demolished on the night of 15-16 April. One empty village was destroyed as part of a Haganah training exercise. Palmah headquarters informed the Haganah General Staff on 19 April: 'Yesterday company exercises in fighting in built-up areas took place south and east of Mishmar Ha'emek. At the end of the exercises, the village of al Kafrin was blown up completely.' The destruction of the villages around Mishmar Ha'emek and in the Jerusalem Corridor were the first regional razing operations of the war, born of local military imperatives admixed with a measure of vengefulness."

"In the course of the battle, ALA units – demoralized by reports of Deir Yassin and the death of 'Abd al Qadir al Husseini – often retreated first, abandoning the villagers. Al Ghubayya al Tahta, al Ghubayya al Fawqa and Khirbet Beit Ras were raided by Haganah forces on 8-9 April and blow up piecemeal during the following days. On 9 April, Haganah units raided Abu Shusha; most of the villagers had already fled. Those who had remained behind were expelled. The village was partially razed. On the night of 11/12 April Palmah units took al Kafrin, which was found empty, and Abu Zureiq, where some 15 adult males and some 200 women and children were taken captive, and occupied Abu Shusha. Some 30 of Kafrin's houses were blown up that day and some of Abu Zureiq's houses were blown up that night. The women and children of Abu Zureiq were expelled. The last houses in Abu Zureiq were demolished by 15 April. During the night of 12/13 April, Palmah units occupied Ghubayya al Fawqa and attacked al Mansi and al Naghnaghiya, southeast of Mishmar Ha'emek. Mansi and Naghnaghiya were evacuated by the Arabs on 15 April.

The villages were blown up during eh following days. According to the Mishmar Ha'emek logbook, by 15 April, 'all the villages in the area [more or less] as far as the eye can see [had] been evacuated'. Most of the villagers reached the Jenin area and sheltered in makeshift tents. They appealed to the AHC:

Thousands of poor women and children from the villages of Abu Zureiq and Mansi and Ghubayya and Kafrin and other places near the colony of Mishmar Ha'emek, whose houses the Jews have destroyed and whose babies and old people [the Jews] have killed, are now in the villages around Jenin without help and dying of hunger. We ask you to repair the situation ... and do everything to quickly send forces of vengeance against the Jews and restore us to our lands.

The battle of Mishmar Ha'emek was over.

But there were some follow-up operations.

On the night of 15/16 April, Palmah units raided and blew up much of the large village of al Lajjun. 'The area between our bases [in Ramot Menashe] and the Wadi 'Ara road is [now] empty of Arabs', reported Palmah HQ on 16 April. On 19 April, a Palmah unit held a built-up area combat exercise in Kafrin. At the end of the training session, the village was leveled."