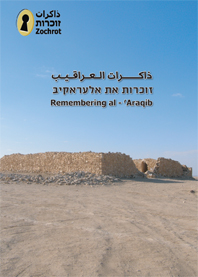 Excerpt from the booklet:

Memories of a visit

I wrote these reflections in 2006 after visiting Nuri al-Uqbi on his land. He has been there since, for almost three years. Unfortunately my words are still relevant. I hope, in a modest way they will help his spirit and give him strength to continue

Nuri al-Uqbi is an old acquaintance of ours, and he is also a strange man. He insists on returning to his village on the al-'Araqib land. His family was expelled from their land in 1951. The government promised that they will return after six months. After he tried every legal means, he decided, out of despair, to settle on his land, in a Bedouin tent (made of plastic). Nuri is there for a couple of months now, and my family and I decided to visit and support him.

It was Friday afternoon, we waited for the sun to go down a bit, so that we wouldn't have to be there at the heat of day - we have this luxury. We traveled south, at some point we began to nag Nuri on the cell phone, we missed one entrance, went back, got in "just before the bridge" and drove on a dirt road to the tent. What we saw was surreal - a simple tent: on one pole there was a T-shirt hanging, with a picture of an American Indian, a mattress on the ground, a water container, a pile of yellow plastic chairs, and an over loaded car on the side. In front of the tent there was a memorial, pieces of cement and iron cluttered together as a memory of the floor that Nuri built and that the police destroyed. To the south, in the distance, - the new Tarabin al-Sani' (Beduin) neighborhood, to the north, the Beduin town of Rahat, and a new Jewish settlement- Gvaot Bar (the hills of the wheat), this settlement is being built on the land of the al- Uqbi tribe. From the east, in the distance there was a small tent with shepherds that came for the season with their sheep, they will leave soon. And there was the desert.

But from the eye of a Bedouin you could see other things as well: in the wadi behind us there was a pile of stones, ruins of a house that was built in the 40's - that is where Nuri was born. In the wadi in front of us more ruins of another house, and a tree that was the house of Nuri's grandfather, next to that there are signs of a plowed field. A year ago Nuri planted wheat, then he went to the USA to participate in a conference on dispossessed peoples. That same night he dreamt that there was a big celebration in the family, trays of food were served - rice and meat, and suddenly everything was gone, and no one ate. Nuri got up in panic. That morning he spoke in a panel together with a Native American woman, an Indian from Venezuela and a Kurd. Among the things he told his audience at the conference was that he has a feeling that as he spoke, the Green Police (a force that patrols the Bedouin's lands) was destroying the plants that he had planted. And sure enough at that very moment tractors were destroying his fields.

Usually in stories such as this one, that include almost-mythological characters such as Nuri, just as the wind blows through the tent and the sun begins to sink there is a dream, god intervenes, and the special effects help strengthen the claims in the story. (In my family we also have this pattern, a dream that helps the story along, with us it was my grandfather who woke up one morning with a dream that helped change the course of our family history, or at least gave it a mythical twist). In the story of the Uqbi tribe there is no need for literary effects and justifications, the story is solid, it has no cracks.

Nuri al-Uqbi is an old warrior in the struggle, I met him more than once, each time over another aspect of this struggle: once it was a struggle to get a building license for a kindergarten in the unrecognized village near Hura, where al-Uqbi tribe was deported to in 1951, another time I heard him speak at the office of the Association for Defending Bedouin rights, there, in the old (Arab) city of Beer Sheba, surrounded by piles of yellowed pamphlets that were left over from some demonstration for justice (someone was over-optimistic and printed them by the hundreds) I found on the wall a picture that the Jewish artist Tumarkin made in 1978. It was composed of two black and white photos-one of people being deported in a train cart (from our shoa) and the other of a Bedouin girl. Under the photos Tumarkin wrote in his hand writing "Jew, don't do to them what others have done to you."

I asked the artist for a copy of this picture later, and it is hanging in my office. Sometimes I can sense the discomfort of my guests when they come in and see it. Indeed it is discomforting. For me it is a reminder of the unrecognized villages, the stolen land, the racism, and now it also reminds me of what Nuri said: "we are the Indians of the State of Israel."

Nuri told us the story of his one-man protest. When we where there two of his family members dropped by. He demonstrates alone but he is not alone in the struggle. He explained that there are many ways to struggle, those who can make a living and support the children in their schooling should do that, and those who can stay on the land and struggle with the police force should do that. He taught us that with such a long and violent struggle against racism and plunder we need to function in different ways. At the beginning I was alarmed; there was desperation in his voice that I didn't remember from the past. This time, he said, he is there to stay: he will either get to build his tribe's village on their ancestral land or he will die there. As he went on and told his story I heard the fighting spirits back in his voice and with it his humor.

It seems that the art of story telling that we attach to the people of the desert has not missed him, he described his latest three arrests like a suspense story, and he stressed all the names of the police officers that came and their ranks, the dates and the time of their "visits". He described how 250 policemen and Special Forces came, and when the high officers spoke to him none of them sat, even though he has chairs, (plastic and yellow). They stood and told him he was arrested, no warrant from a judge, no reason - the State of Israel in a vulgar, un-proportionate demonstration of force against Nuri al-Uqbi, a 64-year-old, thin, and wrinkled man, sitting on a mattress in the middle of the Naqab.

After each destruction of his tent and after each arrest Nuri returned and built a new tent, each time more modest. In the distance I saw the roofs of the new settlement - Gvaot Bar. Jews who live on the land of al-Uqbi tribe. Jews who answered the Zionist call to come and bloom the desert. Yet another generation of so-called innocent people that in a few years will say that they did not know that they stole and expelled. People that do not ask who planted the wheat. When I think of these young families it is hard not to be reminded of the slogan: A people without a land are called to a land without a people - but Nuri and the rest of the al-Uqbi tribe, Nuri and the rest of the Bedouin, Nuri and all the Palestinians, are they not a People in the Zionists' eyes? Was the land empty because it was empty of Jews? I want to see the faces of these people who came to live on the Hills of the Wheat, I want to look in their eyes, and I want Nuri to take off his sunglasses and let them look into his eyes. In the internet site of this settlement is says that Gvaot Bar is a rural community for secular Jews. It is planned to inhabit about 500 families. The settlement is situated in the heart of the hills that the wheat grows on, and from that it got its name... Much effort and resources were put into planning a quality architectural plan...

I especially liked the sentence that describes the struggle of the State of Israel against Nuri al-Uqbi: "much effort and resources were put in planning ..." The internet site also has a list of characteristics that the settlement is looking for in their new candidates, it is missing only one quality: blindness. When we left, it was almost Shabbat, a lone fox was standing on a hill in front of us, and we drove back to our family dinner, in our house, which does not have a demolition warrant standing over it.