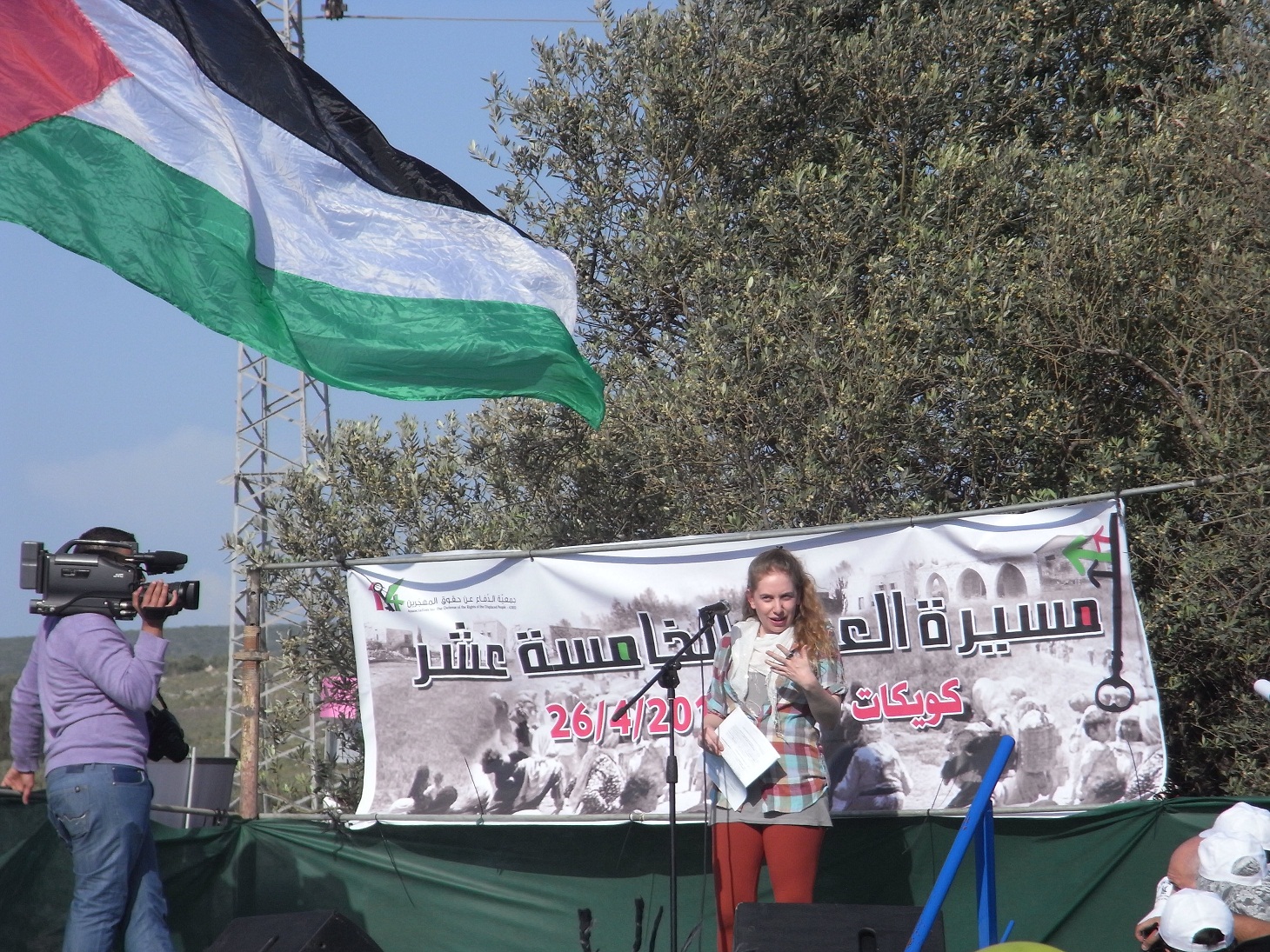 Who am I to stand before you and speak?
I’m not a politician, not an historian, not an attorney.  I’m not an expert on international law or diplomacy.
I’m 29 years old, born and raised in Israel.  I believed everything they taught me in school.  About wars we had to fight because we had no choice, about the enemy who wanted to wipe us off the face of the earth, about purity of arms.  I never really understood the reason for all that militarism, why they kept on with it, but I was a good girl and I believed.
Sometimes they spoke about peace and tolerance, pluralism, accepting the “other.”  Such statements seemed to me droplets of light in a black sea, fig leaves that had fallen away.  My education, the culture, the texts, the Newspeak – told me a story I believed.  They taught me what to think, not how to think, so I didn’t question how things were.  They let me live a normal life – a life in which my fundamental rights were well-protected – so I didn’t question how things were.
But a few years ago I began asking questions.  I began to doubt the state that sees itself as democratic and peace-seeking, but which is in fact discriminatory and warmongering.  If we want peace, why do we go to war?  I abandoned cynicnism and began to redefine how I see peace.  No more a dove with an olive branch, no more hollow slogans about peace, but an honest, courageous investigation of what peace means.  Peace, for me, comprises justice, compassion and total, actual equality.  It definitely does not comprise war or violence.
Then I began to ask what that word – Nakba – means, the word everyone’s so afraid of.  And that’s how I became active in Zochrot.
For the past few months I’ve been part of a group in Zochrot planning the return of Palestinian refugees.  It’s composed of Jews and Palestinians.  We’re preparing practical plans for the return of refugees to Jaffa-Tel Aviv, specifying the elements in detail, considering how it can actually be implemented.  We’re developing ideas and proposals for the return of refugees to the Jaffa-Tel Aviv region.  Another group is working on the same topic in Bethlehem, under the auspices of BADIL.
One of the tensions in the group, which we discuss, is the question of what gives us the right to formulate such plans.  We try to ask ourselves, frankly and honestly, how Jews can possibly plan the return of Palestinians.  And, in a broader sense, how those with power can possibly plan for those denied power.  And, even more generally, how can any group possibly plan for another.  My answer is a question:  why should there be a distinction between those groups - who are “they;” who are “we”?  My “we” doesn’t automatically comprise my co-nationals; it consists of those who share my desire to live in a just, egalitarian society of brotherhood and respect.  It’s clear to me that egalitarianism requires me to forgo privileges that benefit me as a member of the occupying power in the situation created by the existing regime.
Our planning activity is not intended to define any particular standard.  We’re opening the door to new thinking.  We’re proposing an alternative to the existing impossible reality.  We’re looking for alternative ways of return as well as alternative ways of thinking.  Throughout my entire life, the regime has tried to get me to join its side.  But if its side includes looting, hindering and repression, I’m not joining!  The return I’m involved in planning involves not only returning people to their homeland, but also insuring that homeland will be a place which is just, egalitarian, pluralistic, open and inclusive.
Moreover, I’m not planning for others; I’m planning for myself.  I’m planning to live in a society that doesn’t compel me to go to war, that doesn’t impose on me an imaginary enemy, that doesn’t force me to participate in a system of plunder.  In which one person’s freedom doesn’t come at the expense of another’s.  For me, the return is the opposite of separation.  I’m inspired by the thought of what life here was like, in part, before 1948, the possibility of another way of life that has been erased from written history.  The possibility of another way of life that militancy has erased from the territory.  The possibility of another way of life that violence eliminates from discourse every single day.  The possibility of living together in mutual respect, cooperatively.  Palestinians and Jews, all with equal rights.
So,
Who am I to speak – a woman who doesn’t accept the current political system, the power regime that divides its citizens and discriminates among them. Who are we to plan – we are people who want to live in a society that is different, a just society, a community whose members are equal, where there’s room for all.
I want to thank the Association for the Defense of the Rights of the Internally Displaced which has been organizing this important event for 15 years.  I support your just struggle, which is mine as well.  I want to thank you for giving me the opportunity to be here and participate in your dream of return, which is my dream also.  A dream is an important step in creating a different reality when existing reality is unacceptable.
May we realize our dream.

Planning the Return and practical thinking Jewish response to the right of return Committee of Internally Displaced Persons Jewish response and coping with the Nakba Acknowledgment and reconciliation Activities promoting return March of return Articles, writing and press about the Return