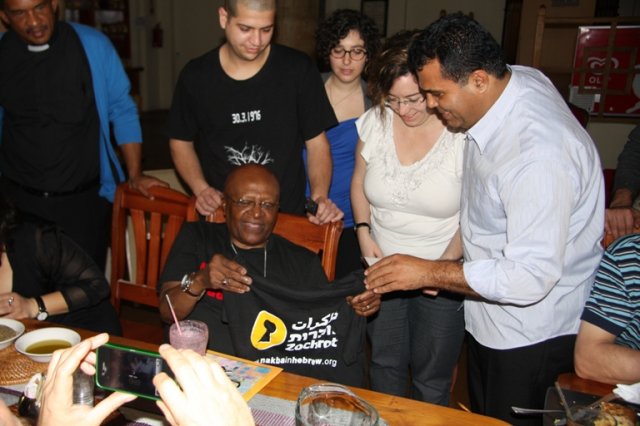 Study Visit to Cape Town
We hope that whoever reads this will not treat it as a manual of return proposed by Badil and Zochrot, but rather as what it is: an attempt to begin to discuss and answer questions about return by a particular group of people at a particular time after engaging in a very particular experience

The Badil-Zochrot Study Visit to Cape Town: An Introduction

The return of displaced Palestinians to the lands from which they have been displaced and denied return for over six decades is the central issue around which the Palestinian struggle for freedom and self-determination revolves. Among those who value justice and respect for international law, there is no disagreement that refugee and IDP return, rehabilitation, and compensation is central to a just and lasting solution to the woes of the region. For both Badil and Zochrot, it is this aspect of the liberation of Palestine to which we have dedicated our efforts for over a decade since our organizations’ establishment. Through the course of our work, however, we have found that conceptions of “return” have remained somewhat superficial. This is true among the settler community that sees it as a calamity to be avoided at any cost as well as among the indigenous community that equates return to a reversal of six decades of settler-colonialism; the return to a paradise lost.

In what follows we offer an overview of the various dimensions and aspects of the work needed in preparation for the return of Palestinian refugees. In general, we believe that the struggle for return needs to be cumulative, flexible, and sustainable:

1. Cumulative struggle: working towards return involves several dimensions and spheres of activity (as discussed below). These different aspects should be seen as supporting, feeding into and building on one another. In this way a versatile and coherent, rather than a disconnected and haphazard, struggle can evolve.

2. Flexible struggle: working towards return must be attuned to (sometimes sudden) changes in geopolitical circumstances, with a readiness to make quick shifts in strategy and priorities if necessary.

3. Sustainable struggle: the work described below needs to take place continuously, not only before the return itself, but also during and after the return process. The point is to avoid what happened in South Africa, where the civil society struggle against Apartheid focused on bringing about formal regime change, and when this happened in 1994, civil society lost its orientation in the new reality while many aspects of Apartheid persisted in different forms.

Some of the Lessons from the South African Restitution Experience

1) In assessing return and restitution claims, the evidence accepted as part of these claims in the South African case included a combination of official documents, archival materials and "triangulated" (cross-referenced) oral history (e.g. asking former neighbors). We found this to be a good combination of rigor and flexibility that can be adapted to Palestinian reparations claims.

2) Several South African activists characterized the post-liberation state as a “Nanny State,” on in which there was an overreliance by citizens on the transitional authority/state institutions at the expense of community and citizen empowerment. A possible lesson is to encourage community claims in which the onus is on civil society level activity among claimants (e.g. claimants struggling to return to a particular village or urban neighborhood) to develop and put forward their own plans for how to implement their own reparation and return.
3) Purely rights-based approaches that emphasize the restitution of properties and/or the responsibility of the state in acquiring the land from subsequent occupants in order to return them to their returnee owners are replete with problems. These include:

a.  Such approaches often reward perpetrators of Apartheid by allocating state funds to purchasing properties from them at market prices;

b. Issues of economic sustainability and development objectives are not built-in to restitution. As such, restituted farm-land may be turned into housing with negative effects both on the economic and environmental level);

c.  Economic disparities among returnees, as well as between returnees and occupants can be further entrenched. For instance, those with access to resources are more likely to be able to submit well-argued claims because of access to information and lawyers; those who owned a great deal of property before displacement end up with much more than those who did not own property; etc.

d.  The passage of time has meant that communities and claimants are exponentially larger in number and diversity than they were at the time of displacement (for example, a village that had one thousand inhabitants in 1948 is a place of origin to many more thousands of people today; a refugee couple from 1948 is likely to have a family numbering dozens of heirs today; a third- or fourth-generation Palestinian refugee is likely to have claim to several properties in several locations depending on what was owned by the refugee’s grandparents and great-grandparents).

e.  Even with a flexible mechanism that incorporates a broad range of acceptable evidence for deciding claims, not all refugees may be able to prove rightful ownership of                     properties.

Redressing continued injustices suffered by Palestinian victims of Zionist colonization and state violence should be a multi-tiered process that entails several different and parallel mechanisms. A legal system set up by the transitional authority would determine, through extensive and transparent deliberations, specific criteria for indicting perpetrators as well as levels of culpability for acts of violence. In general, violent acts committed as part of justified Palestinian armed resistance to occupation will not be considered on par with violence perpetrated by the occupiers.

However, we believe that the meaning of justice cannot and should not be limited to formal and/or state-sanctioned legal procedures, and that there should be several decentralized mechanisms for accountability, out of which the courts (and their legal power to mete out punishment) constitute merely one. The majority of those involved in acts of violence, oppression and other forms of human rights violations should be held accountable through public hearings from the national to the local and communal level.

The purpose of the reconciliation process is twofold: redressing injustice through restitution (implemented through mechanisms determined by the transitional authority) and public acknowledgment of injury. We are convinced that a focus on truth-telling rather than crime will encourage the majority of Israeli-Jews to confront and work through Palestinian stories of loss, imprisonment and resistance as well as promote collective healing and a renewed sense of shared humanity.