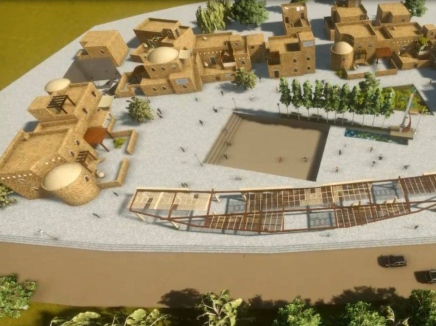 A utopian Arab city? Turn left at Israel's Route 65
Plans for a theoretical Arab city show how the right of return could be implemented - in terms of planning, architecture and design, at least

There will be a large square in the center of al-Lajun, the city sited on Route 65 between Umm al-Fahm and Afula. Surrounding it will be public buildings to serve the future residents and visitors. Among the buildings will be a museum, art galleries, craft workshops, a visitors center, coffee shops, and even a center for the protection of nature. The idea behind the planning of the city center draws its inspiration from houses with courtyards, the standard style of building for local Palestinian construction. In the middle of the square will be a sort of low stage for meetings and performances. The buildings will be faced in stone and designed in the traditional oriental style, including arches and domes.

The theoretical-utopian city, planned by architect Shadi Habib-Allah, is to be built on the ruins of the Palestinian village of al-Lajun - abandoned and destroyed in 1948, one of some 500 Arab villages removed. Since then, no Arab town has been established (except for the Bedouin towns). Kibbutz Megiddo now sits on the land of al-Lajun.

The new city is intended to house the families of the village's residents, most of whom now live in Umm al-Fahm, as well as additional Palestinian refugees who will come to live there as part of their realization of their right of return. The square will feature a "key" monument - an enlarged version of the symbol of the dream of the right of return.

A number of human-rights organizations involved with the dream of the right of return are partners in the al-Lajun project. The project was presented this week at the international conference titled From Truth to Redress: Realizing the Return of Palestinian Refugees, organized by the Zochrot nonprofit.

The conference was held at the Eretz Israel Museum in Tel Aviv - or, as Zochrot calls it, al-Shaykh Muwannis (a Palestinian village that was located in the Ramat Aviv area before the founding of the State of Israel) last Sunday and Monday. Zochrot said the multidisciplinary conference was planned to "discuss practical aspects of the return of Palestinian refugees grounded in the transitional justice principles of acknowledgement, accountability and a joint Jewish-Palestinian process of redress."

This was Zochrot's second such conference. It was not dedicated to the debate over the right of return in itself, but to a concrete discussion of ways to implement the return, in both a symbolic and concrete fashion - culturally, diplomatically and spatially.
“The objective of this conference is not to argue whether the Palestinian refugees have a right to return, but to see how this right can be realized," states Zochrot. The conference focused on "the implication of return for the country's physical, cultural and economic space, on the nature of its future society, the status of Palestinians and Jews living here, the nature of its regime, and, last but not least, the practicalities of returning property after 65 years of refugeehood and the destruction of Palestinian life on the one hand, and the establishment of a Jewish State and the resulting new reality on the other," said Zochrot.

The power of an image

The center of the new city has a neo-traditional architecture style - and that is not by chance or an expression of personal taste. Habib-Allah, who agrees with the description of a Disneyland style of kitsch, explains the choice as a need to restore the architectural typology from before the Nakba (“the catastrophe,” the term used by Palestinians for the establishment of Israel), as burned into the memories of the refugees from the original village.

The planning of the city was done by the al-Lajun Group, which deals with the vision of the right of return and as well as other organizations, including Zochrot. The group is mostly made up of young activists - the third generation of the village's original residents who left and now live in Umm al-Fahm.

The architectural return to the original village as they imagine it, said Habib-Allah, "is a real need. We thought to realize the memory to memorialize traditional Palestinian architecture and also to soften the shock of return to a completely foreign place," he said.
Habib-Allah, 28, is from the village of Ein Mahal near Nazareth. He is a graduate of the Jordan University of Science and Technology in Irbid, Jordan, one of some 25,000 Arab-Israeli students who have studied in the neighboring country. Since graduating three years ago, he has worked in an architectural firm in Nazareth to receive his architect's license, and has worked on a number of private architectural projects. He often visits Jordan and returns to the "Arab-cosmopolitan atmosphere of students from the entire Arabic-speaking space that I miss here. What bothers me there is mostly that women have no personal security," he said.

On the edges of the urban center planned for al-Lajun, there will be neighborhoods of housing in the "Western" Israeli suburban format, and a light industrial zone that could be a joint project with nearby Kibbutz Megiddo and other Jewish communities in the area. The city will also have a transportation hub that will serve neighboring communities on Route 65 (a major national thoroughfare). The destroyed communities, whose memory has been erased from the Israeli space, will be commemorated in the street names and public buildings of the new town.

Al-Lajun, like the other cities in the project, is located in the area that is designated as the only available land for the development of the Arab communities of Wadi Ara. In 1998, thousands of dunams of land in the area were expropriated for military needs and declared a closed military firing zone. The move triggered riots, which were cited by the Or Commission - examining the violent Wadi Ara riots of the fall of 2000 - to be a precursor to that later violence. To this day, they remain a warning sign and lingering scar. The investigative commission recommended compensatory land in return for the expropriated land. The final compensation did somewhat soften the anger and split created, but was not a true solution. The al-Lajun project could be a utopian correction.

In a lecture in response to the al-Lajun project, architect Dr. Haim Yacobi, the head of the masters degree program in urban design at Bezalel - Academy of Arts and Design, Jerusalem, criticized the project on a theoretical basis - and the connection between architecture, politics and utopia. He saw it as an opportunity for residents and refugees to formulate a new position, including the demand for land in recognition of the remains of the built-up environment - and not just as a utopia of orientalist fantasy, such as in Old Jaffa or the Ein Karem neighborhood in Jerusalem, but as part of giving legitimacy to the fabric of history, identity and space of those returning.
Does architecture have a place in the process of right of return, asked Yacobi, or maybe it is only an illusion facing the political experience today in Israel? What is the place of ethics in relation to communities of refugees at a time when every discussion of the right of return has no practical horizon in today's reality?

As usual at such conferences, the audience may have been multilingual, but it was already convinced beforehand. Outside there was not even a single demonstration against the conference, and the police who were stationed in the museum courtyard just in case returned to their bases safely. Nonetheless, it seems the right of return made another step on its path to the threshold of public awareness.