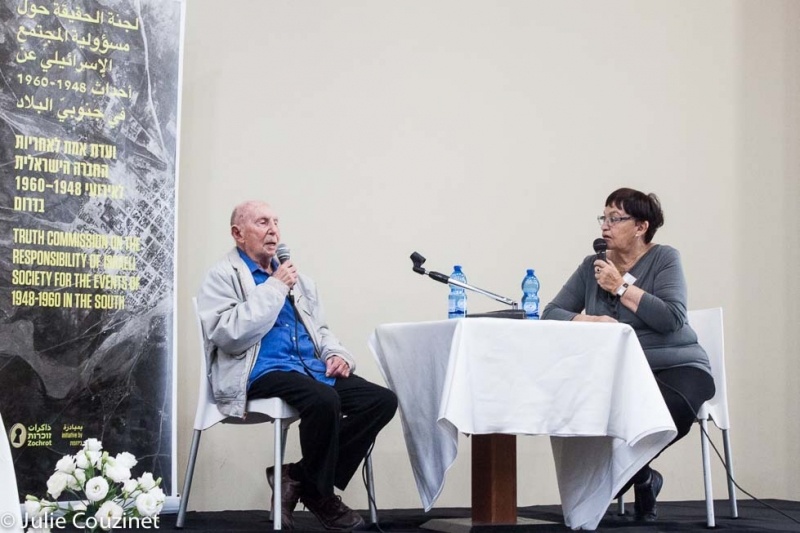 For more info and background on the commission see here.

The Truth Commission’s members, seven social activists and scholars from the humanities and social sciences – including inhabitants of the Negev – began working in October 2014 and will conclude their work when the commission mandate will terminate upon the submission of their final report at the end of 2015.

The final report will be initially published in Hebrew and English and focus on the following areas:

At the end of December 2015, a public event will be held in the Negev to launch the Truth Commission’s final report.

The event will be open to the public and further details will be published soon.

The Truth Commission has been established as part of a broader network of volunteers and activists in Israel and worldwide who have participated in the preparatory team, the steering committee, as interviewers, writers, transcribers and translators, archival researchers, etc.

The Truth Commission is attracting global attention and interest among human rights and transitional justice activists and scholars interested in the unique nature of the situation in Israel/Palestine. A thesis, several lectures and conferences, as well as book chapters are currently being dedicated to the commission from such diverse perspectives as history, psychology and political science.

"I arrived to the conquest of Beersheba, in which I took little part. But what I can say about it
is that after the occupation, I must say that, there was tremendous looting because the
inhabitants had been moved out by the Egyptian Army – they were transferred by it, few
remained, and we knew them... The fuel, we used to go there before the war and buy it
there. The Jews looted Beersheba! Absolutely... We didn’t find an uninhabited city..."

Dudik Shani:
"Prior to that, in 52 or the end of 51, before we came here, the A-Sana tribe located around
Lakiya was transferred. Already during the war they had been moved from the western Negev to the Lakiya area because here this tribe had a stronghold, and then in December 49 the IDF suspected that some of them were working for the Egyptian intelligence and so the IDF ordered the tribe to move from the area across the border which was already marked."

Interviewed by Judith Yahav, press here for the full text in Hebrew.

"I was born at the time of the English. I don’t remember how long the English were in Palestine. In 48 the Jews came and the English gave them everything and left. They gave them guns and tanks. At the time, we were in Al-Shari‛a, and my mother was pregnant. Before the English left, they entered all the Arab villages and towns, both Bedouin and not, in Gaza, in Haifa, in Yaffa, and took the weapons from them..."

Live testimony for the committee in Lakiya, October, 2014ת press here for the full video in Arabic.

When the Jews entered Beersheba there was fighting and killing, near the Bir Abu Hamam area. One woman fled from Beersheba to Lakiya and took her pillow instead of her son. My parents saw her with the pillow...

Live testimony for the committee in Lakiya, October, 2014ת press here for the full video in Arabic.