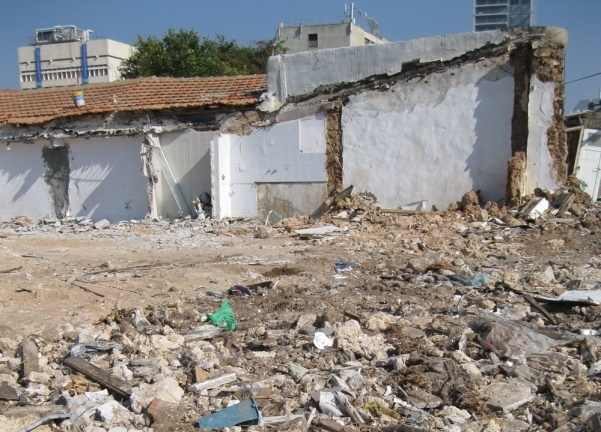 Opposition to Building Plan in Summayl (Tel Aviv)
During the Nakba the Arab residents of the village left their homes, and the places were taken over by Jewish refugees who settled in the houses and turned the village mosque into a synagogue – which is still active today.

Today the village embodies a point of memory of the Nakba. Its presence persists as thousands of Tel Avivians go about their doings, oblivious to the would that remains open in the heart of the city. It is ironic that coming up to the 100th anniversary of the founding of Tel Aviv, local developers, supported by the Tel Aviv municipality, have chosen to erase the remains of the village which are in fact a part of the city’s roots, and in so doing carry on the Zionist project which sees nothing but itself in the local landscape.

The village name ‘Summayl’ seems to come from the word ‘tsumil,’ which means ‘dry land.’ Some view this as a reference to the elevated range of sand hills on which the village was situated, the remains of which are still visible today. This location enabled the residents, who during previous centuries worked in agriculture, to watch and supervise the fields and orchards that surrounded the hills, as well as the ancient path that wound beside it (today the outline of Ibn Gvirol Street) and which led from the city of Jaffa northward.

Summayl was consolidated as a village during the second half of the 19th century, and expanded significantly at the beginning of the 20th century when the number of residents reached about 700 people living in close to 100 houses. The two familial clans that composed most of the village population were the clans of Tsarafi and Djabra. The residents were farmers and as Tel Aviv grew, came to earn their livelihood providing different services.

Over the years houses in the village came to be rented out to Jewish residents, and there was a life of co-existence between them. Darwish Tzarafi was born in Summayl and lived there until age 8, when his family was forced to move. Today he resides in Jaljuliya. He describes the relationships between Arabs and Jews before the founding of the state:

“I remember our neighborly relations with the Jews. In our house lived a few Jewish families, and we had very good relations with them. From them I learned to drink cold tea and to each gefilte fish… My sister learned to speak and write in Hebrew as well as a bit of Polish from the Jewish women who lived with us, and in return she taught them to speak and write Arabic. I remember the holidays and the weddings in the village. These were times when all the families came together, everyone visited everyone else. To the weddings people flowed in from the surrounding villages as well, and of course Jewish families who lived nearby also came …”

During the Nakba the Arab residents of the village left their homes, and the places were taken over by Jewish refugees who settled in the houses and turned the village mosque into a synagogue – which is still active today.

Today, the building plan seeks to destroy the various remains that are part of the complex of the village of Summayl. At the Tel Aviv University School for Preservation Rachel Nachuma wrote in her research on Summayl: “Looking ‘objectively,’ the place looks like a heap of structures, courtyards, roofs, from which aesthetics and beauty seem light-years away. But preservation in the 21st century is not the birthright of the beautiful, the representative, and the monumental. The litmus test of a site must be carried out in light of the cultural heritage it bears, its representation in the space and its dearth in the landscape and in human culture.”

The total disregard for the displaced residents of Summayl sends a clear message to all internally displaced people, citizens of the state: You were disinherited for the first time in the Nakba of 1948, and your memory, too, does not matter. The state expropriated their lands by law and now ignores their memory as well. The state constituted them as damaged citizens from the outset and continues to disinherit them in the present. Thus, Zochrot opposes the continuation of the destruction and calls to preserve the remains of the village of Summayl.

Destruction in stages after 1948