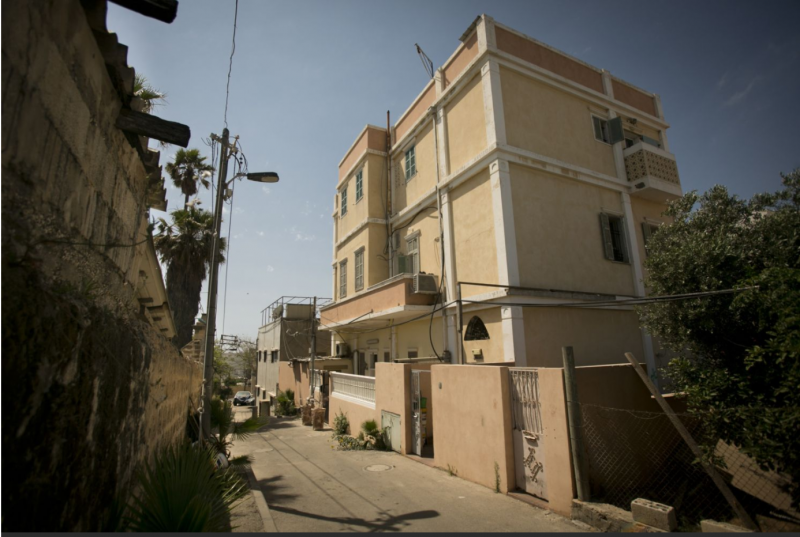 HISTORICAL RESEARCH SUMMARY: The house in Maanit 11
Houses beyond the Hyphen: Open Houses, Exhibitions and Tours in Yaffa - 14-16.5.2015
2015
Share it

Pre-1948 History
According to the municipal file documents, the house was built in the 1930s, probably after 1934. The person who filed the application to build the house was ‛Issa Safady. His brother, Younes Yousef Safady, renovated a house for his family on a nearby street on the same block, 7032, parcel 37-38. This house is now located on 3 HaLa‛ana Street.

In front of ‛Issa Safady’s house used to be a nun school, whose blocked entrance can be seen from across the street from the entrance to the building on 11 Ma‛anit Street. Today the school complex houses Palestinian families that the Greek Orthodox priest allowed in there in order to protect the property and the building.

Younes Safady’s documents indicate that the neighborhood’s name used to be Karem Sammak (Fisherman’s Vineyard). We have asked local witnesses currently living nearby about that name, but since they used to live outside the ‛Ajami area, in other areas of Jaffa, prior to 1948, the name was unfamiliar to them. Younes’s wife was widowed by the Nakba and she remained living in her house in Yaffa, as attested by the documents available to us. Apparently, however, this house was also eventually appropriated by the Israeli Custodian of Absentee Property, and documents in the file attest to that effect.

A house down the street from ‛Issa Safady’s house, on what is today 1 Ma‛anit Street, used to be owned by the Dajani family.

A sign on the door on what is today 3 HaLa‛ana Street indicates that a member of the Safady family currently lives there. But according to the testimony of a local Palestinian who lives right next to the house on Ma‛anit Street, and who has been living in the area since 1948 after having previously lived in Jaffa near today’s Jerusalem Boulevard, the Safady currently living on 3 HaLa‛ana Street are not the same Safadys who had lived there prior to 1948. The original family used to be Christian and local, while the current family is Muslim from the north of the country.
One of the witnesses interviewed about the House on 3 Raziel Street – where another exhibition is held – told us that his father, who used to be a barber on Bustrus-‛Awad Street, had given him an Ottoman title deed (kushan) from Younes Safady. Younes owed his father 500 Palestinian Pounds and signed a promissory note mortgaging his house to the witness’s father until such time as the debt is repaid. It has not been repaid by 1948, and the witness still has the document in his possession. When we asked him whether he knew either of ‛Issa or Younes Safady, he told us the story about the promissory note and was moved by the fact that he now knew where the house in question was located.

Local witnesses living in the building on 11 Ma‛anit Street told us that a few years ago, a young Palestinian member of the Siqsiq family, now residing in Jordan, had told them that that house used to belong to his family. We have tried to glean from the documents available to us whether ‛Issa Safady had sold the house to the Siqsiq family, but there was no record to that effect. Other local witnesses (some of them members of the Siqsiq family still living in Jaffa), told us that the family used to live in ‛Issa Safady’s home after the Nakba. Later on, they left and the house – owned by the Custodian – was rented to other families through the Halamish subsidized housing company.

The Safadys were well-known in Jaffa and owned other houses in the city, including near the Jday family pharmacy on today’s Yefet Street (the Green Pharmacy). A local witness told us stories about George Safady who used to be a school secretary. George’s father was probably a milkman. George had three other brothers, one of whom, Saliman, was a construction engineer, and another was a barber who worked on Bustrus Street. George Safady remained in Yaffa despite the Nakba, but eventually immigrated to Australia, where his entire family now lives. He is 87 years old.

We haven’t managed to establish any relation between George Safady and ‛Issa or Younes Yousef Safady. We have also failed to contact any member of the original Safady family who has built the house on 11 Ma‛anit Street.

Post-1948 History
After the Nakba, the house was appropriated by the Custodian of Absentee Property. In the 1980s it was owned by the Halamish public housing company. In the course of the 1990s and 2000s, it was sold apartment by apartment to Israeli Jews and Palestinians. It is currently divided to four apartments, two on the ground floor, one in the middle and one on top.

Today
The landlords are both Jewish and Palestinian Israeli citizens. The latter have bought their apartment from Halamish about 13 years ago. The Jewish owners also bought a construction permit that allowed them to build an additional apartment on the original roof.