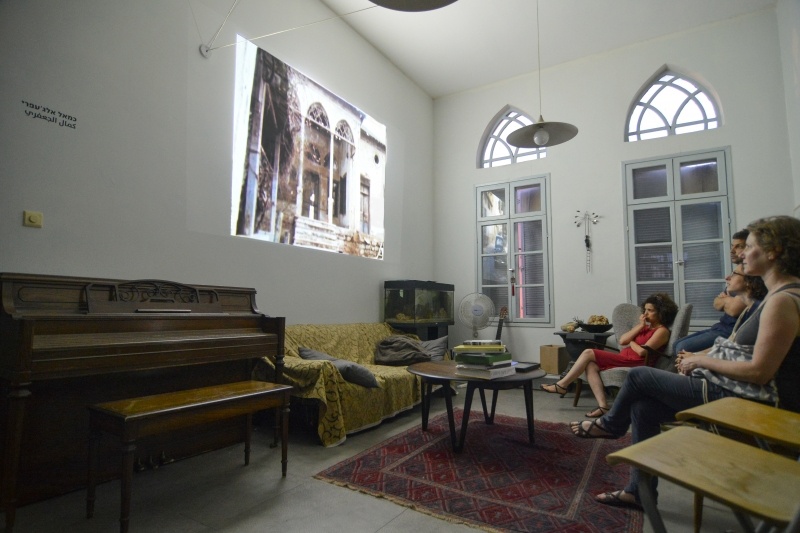 HISTORICAL RESEARCH SUMMARY: The house in Shivtei Yisrael 23, Yaffa
Houses beyond the Hyphen: Open Houses, Exhibitions and Tours in Yaffa - 12-14.5.2016
2016, May
Share it

Based on the building file in the Tel Aviv Municipality Archive, the house is located in
Block 7024, Parcel 4.

Until 1948, the street was called Al-Malek Ghazi. The southern section of what is today Shivtei Yisrael Street (from Eherlich St. to Yefet St.) used to be called Rauf AlBitar after the former Mayor of Jaffa.9 The house was built in the early 1930, and can be clearly seen in aerial photographs captured by American Colony photographers in 1935. Aerial photographs from the mid-1920s well into the 1930s clearly show the neighborhood’s buildings, the Al-Nuzha Mosque and the developing eponymous boulevard (today’s Jerusalem Boulevard).10

Pre-1948 History of the Building and the Area: Interview with Abu Subhi

Al-Malek Street is the western border of Al-Nuzha neighborhood. It connects Faisal Street (today Yehuda Hayamit) with Al-Dajani Street (today Eherlich). As King George Boulevard (previously known officially as Jamal Pasha, although it was always referred to in Jaffa as Al-Nuzha) developed southwards, Al-Nuzha neighborhood developed on its both sides. During the 1920s and particularly during the 1930s, the neighborhood flourished, and several schools were built: “Al-‛Amaria High School was built in 1937 and had a library with 4700 books. Al-Zahra’ High School was opened in 1938, named after Madinat [City of] Al-Zahra’ in Andalusia, Spain. Today, the building houses an Arab school Al-Aywan School was also active in pre-1948 AlNuzha”.

When we interviewed Isma‛il Abu Shehadeh, better known as Abu Subhi (born in Jaffa in 1926), he recalled the schools he had attended. He studied in Al-‛Amaria and went on to the Al-Zahra’, which according to him was a branch of the Egyptian Al-Azhar University. Indeed, he had hoped to pursue higher education there, but World War II prevented this from happening.

In 1933, Al-Nuzha’ Mosque was built. Built by Haj ‛Ali Khamis, the mosque, which is still active, quickly became the neighborhood’s emblem. Wa’el Qubtan told us that his aunt, Mariam Qubtan, had been one of the chief donors for the land purchase and construction.

Abu Subhi told us that in his opinion it was Mariam Abu Khadra who bought the Mosque property and enabled its construction. Indeed, he said that it used to be called Abu Khadra Mosque. Abu Khadra was a large and rich family that even had a street named after it, which started from Siksik Mosque (recently reopened) in the Flea Market.
He went on to talk about the neighborhood, how it was built in the 1920s on the large orange groves. Anyone who wanted to build a house for himself simply had to apply to the municipality and pay a few cents, and if the property was vacant, he could build his house there. He also told us that the neighborhood’s name comes from the idea of building a garden neighborhood (akin to the Tel Aviv Garden City Plan) – Nuzha means “garden”, picnic or promenade.

The neighborhood teemed with cultural life and several movie theaters were built. The first, Cinema Apollo, on the corner of Ajami (Yefet) and Dajani (Eherlich), overlooking the neighborhood, hosted not only movie screenings but also musical performances and conferences. When Al-Hamra Cinema was built in King George Boulevard, right next to the new town hall, it took Apollo’s place. Two more were called Orient and Farouk. Abu Subhi reminisced on watching silent movies in Apollo Cinema and mentioned the opening roof of Farouk Cinema.

Despite being the center of modern urban life in Jaffa during the 1920s, 30s and 40s, after 1948 the neighborhood’s history was completely erased. Our attempts to find information about the house on 23 Shivtei Yisrael Street from that period failed. In the municipal building file, we found documents dated from the 1950s onwards. A letter from 1953 addressed to the Custodian of Absentee Property – the building’s “current owner” – betrays the tragic past but reveals no details. The file indicates that the building remained in possession of the Amidar public housing company until at least 1992.

Our search for clues led us to examine the building files of the neighboring houses; a hint was found in the nearby building. The 1938 plans of the house on no. 21 tell us that the owner of the neighboring house is Haj Ibrahim Abu Seyf, and that the architect is A. R. Abdo. The house is located in Parcel 38 (according to a British map) in Block 24. Our attempts to contact the Abu Seyf family failed. Abu Subhi told us that it is a large family still living in Jaffa, in Jaffa D. neighborhood (to the south). He claims the family originates from the nearby Jabaliya neighborhood (today Givat Aliya).

We found no information about the house on no. 25, but the next house on the street, no. 27, once again exposes a crack in the wall of eradication. Plans from 1929 are registered on behalf of Halili El Siksik, probably a scion of the large Siksik family.

After 1948, all the houses in the row were appropriated by the General Custodian subject to the 1950 Absentee Property Law, which entitled the State of Israel to seize the properties of whoever had moved to territories of hostile countries during the 1948 war. The house retained its original facade. According to the municipal building file, it was reconstructed according to the original plans.

The house on 27 Shivtei Yisrael Street functions as a grocery store since the 1950s. The street has two branches of Abu Hassan’s famous hummus restaurants. No. 23 now has three apartments. Both Palestinians and Jews live in the street; some are owners, and others lease their apartments from Amidar.

Abu Subhi ended our meeting with a question: “What happened to people that they now have to constantly make distinctions between Jew, Christian and Muslim. We all used to live together – we were all people. Jaffa was beautiful and you could live a decent life there”.

The house was part of the "Houses beyond the Hyphen" project to take place in Yaffa between the 14-16/5/2015 in commemoration of the Nakba Day. The exhibition "Recollection" by the artist Kamal al-Ja’fari was exhibitied in the house during those days.