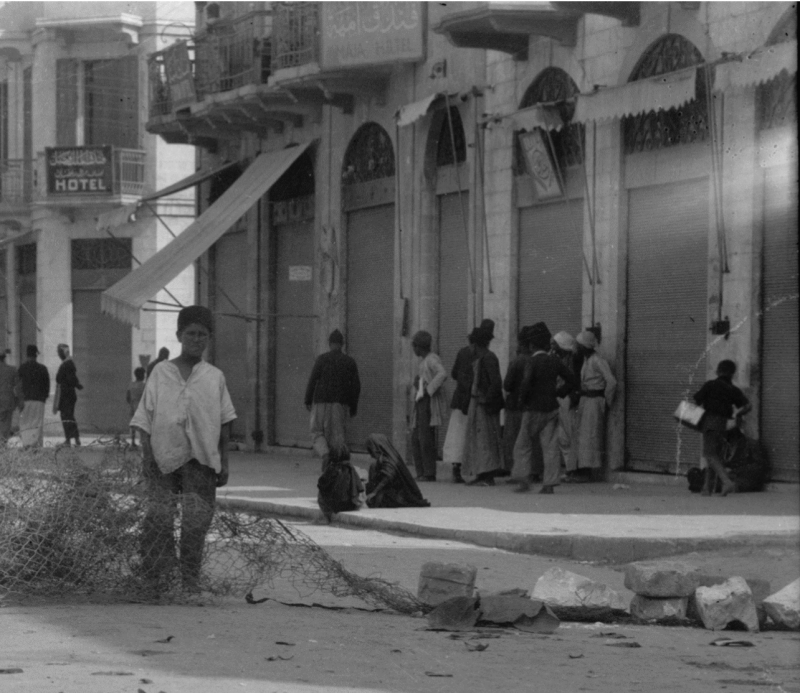 HISTORICAL RESEARCH SUMMARY: The house in Magen Avraham 2
Houses beyond the Hyphen: Open Houses, Exhibitions and Tours in Yaffa - 12-14.5.2016
2016, May
Share it

Based on the building file in the Tel Aviv Municipality Archive, the house is located in Block 7081, Parcel 22. Building plans from the early 1930s indicate that according to the British map, the house was located in Block 7023, Parcel 180.
The house was built in the early 1930s by Tawfiq Abu Ghazaleh. It is located on the historical road to Jerusalem, whose name was changed to Al-Salhi Street, on the corner of Al-Haba Street, whose name was changed to Al-Malek Ghazi Street (today Olei Zion and Magen Avraham, respectively). The house is very close to King George Boulevard (previously, Jamal Pasha Boulevard and today Sderot Yerushalayim or Jerusalem Boulevard) near the town hall on the northern edge of the developing Al-Nuzha neighborhood, not far from the market.
The sumptuous two-story house spans the entire corner. According to the building style of the 1930s in Jaffa, it has a central space from which seven rooms radiate. The ground floor was planned for commerce and it appears to have housed businesses probably ever since the building was constructed. Evidence from multiple documents suggests commercial traffic, a restaurant and perhaps even a small hotel.

Pre-1948 History of the Building and the Area

Tawfiq Abu Ghazaleh’s house was built probably after the house across the street in Olei Zion 36 corner of Magen Avraham 1, as suggested by Kern Kornberg and Liat Rapaport’s detailed documentation file. The house across the street had been built for Amin Nasef, based on plans drawn by architect M. A. Gibben as early as 1922; its construction was completed in 1933.
The rapid development of the boulevard, and with it Jaffa’s new neighborhoods, naturally involved a construction and commerce boom. Nasef, followed by Abu Ghazaleh, identified this business opportunity and invested in the city’s most prosperous area. Photos of the boulevard and new town hall, right across the street, attest to Jaffa’s cultural and economic prosperity during those years.

Based on an interview with Jaffa historian Sami Abu Shehadeh, Abu Ghazaleh was one of the wealthiest families in Jaffa, with many properties and businesses of various kinds. In Families and Personages from Jaffa and Its Environs (Beirut: Al-Mu’assasa Al-ʽArabiya, 2006), Taher Qaliubi describes the Abu Ghazaleh dynasty as follows: “a large family since Ottoman times, originating from Jenin, Azour, Hebron and the Hejaz”.
Saliman Ahmad Abu Ghazaleh (1890-1948) arrived in Jaffa after studying in Istanbul. In the 1920s he had a legal firm on Boustrous Street (today, Raziel) and he played a central role in the Palestinian national movement.

Hassan Tawfiq Abu Ghazaleh (1910, Jaffa-19??, Cairo) was a wealthy businessman. In 1922, he established the White Star bus company serving the Ajami neighborhood. In 1938, it merged with the Manshiye bus company to form the Jaffa bus company, which was active until 1948. He also founded Al-‛Arabi Bank, Riad company, and the Arab Airline Company. He built houses all over Jaffa. In 1948 he was first to leave for Cairo, where he died and was buried.
Tawfiq’s son, Talal Abu Ghazaleh (1938, Jaffa) studied business administration in the American University in Beirut and graduated in 1960. He is a globally recognized expert in accounting, auditing, copyrights and IT systems. In 1972, he founded the Talal Abu Ghazaleh Organization (TAG-Org) which transformed the intellectual property area in the Arab world and worldwide. In 2001-2004, he served as Vice-Chair, United Nations Information and Communication Technologies Task Force (UN ICT TF), New York. Abu Ghazaleh is the author of many books and dictionaries, and is an avid music aficionado and the sponsor of many musicians.
The municipal building file contains multiple documents from 1930-1948, some of which are attached herein, including the original building plans, correspondence with the authorities regarding businesses on the ground floor, and even correspondence with the Ministry of Health, probably related to the business license of the restaurant facing the street.
As part of our research about his father’s house, we have written to Talal Abu Ghazaleh, who currently resides in Jordan, but have still not received his reply.

According to the municipal building file, the building’s facade with its arches and ironworks has been preserved. The inner spaces have been converted into residential units.
The ground floor houses a variety of businesses, including a restaurant – we may even conjecture that it occupies the same space that used to house a different restaurant in the 1930s.
Documents found in the municipal archive, from 1950 and 1954, indicate that the entire building was appropriate by the Custodian of Absentee Property subject to the 1950 Absentee Property Law, which entitled the State of Israel to seize the properties of whoever had moved to territories of hostile countries during the 1948 war. It was subsequently owned by the Amidar public housing company. Some of the stores on its ground floor were sold or leased to private owners. Today, the building is owned by an asset management company and the renters are both Jews and Palestinians.