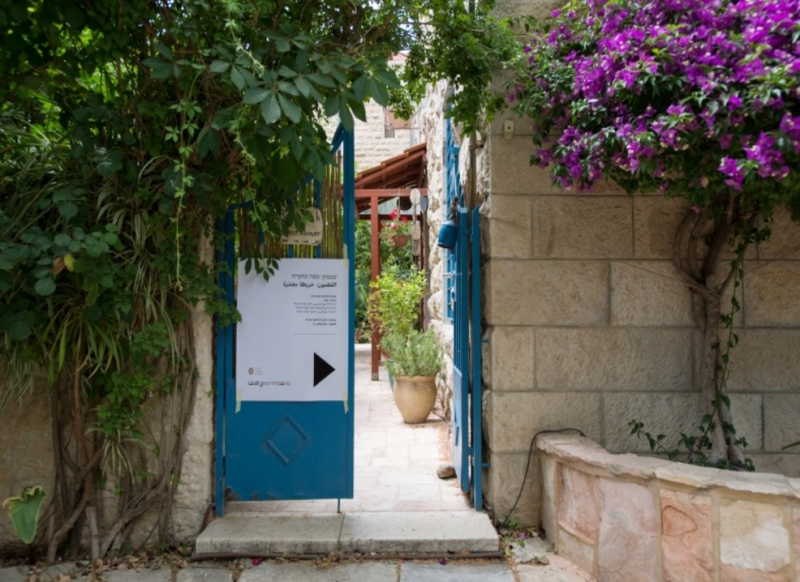 HISTORICAL RESEARCH SUMMARY: The house in 15 Hildesheimer St.
In the frame of: Here in no-here: Open houses, Exhibitions and Tours Qatamon, Jerusalem
2017, May
Share it


The story of the house exhibiting the installation Qatamon: Annotated Map is interweaved with the story of the neighborhood, which begins in the 1920s. The neighborhood stretches east of St. Simeon Monastery, which probably gave it its name: in Greek, kata tōi monastēriōi means “under the monastery”. After the First World War, the Greek Orthodox Church began selling off properties, including lands around the St. Simeon Monastery, first sold in large blocks to members of the religious community, and then to other communities. Although the house on Hildesheimer Street is located in an area now commonly referred to as the German Colony, during the British Mandate period (1918-1948) this was part of Lower Qatamon, stretching between the street now called Kovshei Qatamon (Hebrew for “Conquerors of Qatamon”) and the area now called Valley of Rephaim.

To the best of our knowledge, most of the area was owned by the Muslim Dajani family, and was therefore called Kharat Dajani (Dajani neighborhood), and several houses in the adjacent area were owned by the family, such as the neighboring house to the north. Accordingly, we are located at the upper northeastern edge (about 740 meters above sea level) of Qatamon, bordering on the German Colony.

It is difficult to determine with certainty, but it seems that the parcels in the areas were demarcated by the end of 1926. At the time, the parcel was already owned by the Shehadeh Daoudi family, who probably remained the owners until 1948. Nevertheless, the property extract documents several title transfers and divisions of the property among family members. The last documented activity was on December 21, 1935. According to the extract before us, it seems the family had additional properties in the area, bordering on those owned by the Sharqas, Nimri and Daoudi families.

According to the extract, the property includes two rooms on the first floor and a garage/courtyard, which is inconsistent with the maps we have of this parcel. In any case, at the bottom of the page we find a Hebrew text line dated October 30, 1957, documenting the sale of the property by the Custodian of Absentee Property, entrusted in 1950 with the administration of expropriated Palestinian properties, to the government’s so-called Development Authority, “in whole”, for 2133.335 Israeli pounds.

Even an aerial photograph taken on January 25, 1946, does not clarify matters completely, since the plot seems vacant, without any building.

From here on, Israeli registration documents include additional sheets referring to the building and plot. In 1961, the property was registered under the Development Authority, but its measurements were only 1 dunam (about ¼ of an acre) and 105m2 of “miri” land (according to Ottoman real-estate law, this is land that is not fully private and may not be bequeathed). In late 1982, it was registered as a condominium and from the beginning of 1983, the apartment on the ground floor to the south changes hands several times: Sarah Yekhezkel, Eva Matilda, and Daniel Haddad, until finally bought by Silvia Berkowitz in 1996.