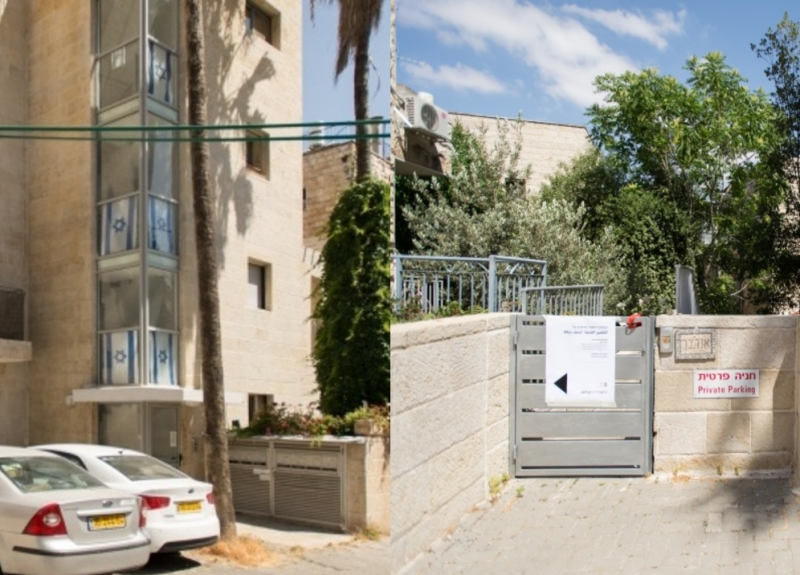 HISTORICAL RESEARCH SUMMARY: The house in 15 Dustai St.
In the frame of: Here in no-here: Open houses, Exhibitions and Tours Qatamon, Jerusalem
2017, May
Share it

The exhibition Old Qatamon: Live Archive is hosted in a new building erected on the property of an original Palestinian house whose story is interweaved with the story of the neighborhood. The construction of the neighborhood began in the 1920s; it stretches east of St. Simeon Monastery, which probably gave it its name: in Greek, kata tōi monastēriōi means “under the monastery”. After the First World War, the Greek Orthodox Church began selling off properties, including lands around the St. Simeon Monastery, first sold in large blocks to members of the religious community, and then to other communities.

The road now called Dustai St. splits off from the historical Malha road that used to connect the large and important village of Malha to the villages of Walajeh and Batir and to the city of Jerusalem. Although this was considered “interurban” road at the time, this section was only paved at a later stage in the neighborhood’s development. In the east, down the slope, was the well-known ice factory owned by the Shtaklif family, where now a synagogue is located, near the Misgav Ladach Hospital. The road then passes through the former Iraqi Consulate (30 Hizkiyahu Hamelech St.) and reaches the Philosophers’ Square, as it used to be called during the British Mandate period (1918-1948) (today, Dr. Maccabi Zalzberger Square – Beit Elisheva). The Philosophers’ Square used to connect those journeying from the south to Abadeen Square (renamed Recha Freier Square) to the west, which used to be the neighborhood’s beating heart.

Although the property is now included in Qatamon, historically and administratively it used to be included in the land registry of Malha village. The first entry in the British Mandate period, probably from November 14, 1921, documents the sale of the area – a total of 21 dunams and 200m2 (more than 5 acres) – by a person called (or hailing from) Gallipoli to a Jew called Israel Ben Yaacov Hahamshvili. Two years later, Hahamshvili sold the land to “Hadji”, who then transferred the ownership to the Latin Church, in January 16, 1924. On July 23, 1930, the church sold a slightly smaller area (19¼ dunams), on which the house was built, probably by the family of Souheila Mahmoud Saleh, who bought it in 1942 for 1650 Palestine pounds.

An aerial photograph from January 25, 1946, shows a building on the southern section of the plot.

In 1958, the Custodian of Absentee Property, entrusted in 1950 with the administration of expropriated Palestinian properties, sold the property to so-called Development Authority, including an area of only 451m2 (~0.1 acres) of “miri” land (according to Ottoman real-estate law, this is land that is not fully private and may not be bequeathed). On December 16, 1969, the authority sold the property to Shmuel and Dina Hasson.

Nevertheless, Hasson family members have told us that the family moved to the house around 1955, after the head of the family bought it from an ultraorthodox Jewish family. The house was flat-roofed, with too large rooms, a small side room, a shower room, toilet and kitchen. All the rooms were connected by a hallway across the house. In the kitchen floor there was an opening leading down to a basement, probably built as khazen al-may  (a room used to store rainwater and surface runoff), and was later used as a workshop for manufacturing and packaging shoe polish. After 1967, a 50 year-old Palestinian woman came from Bethlehem to see the house with her elder son and was invited in by the Hasson family. The family does not recall her name, but we may assume this was either Souheila Mahmoud Saleh or another member of her family.

The Hassons bequeathed the property to their four children in 1999 and in 2001, following a contractor initiative and a new parceling plan the house was sold to a real-estate purchasing group. During the development, the original house, which had remained in place for some 70 years, was destroyed. The mighty palm trees, which survived the destruction, at the entrance to the house, had probably been planted by locals before 1948.