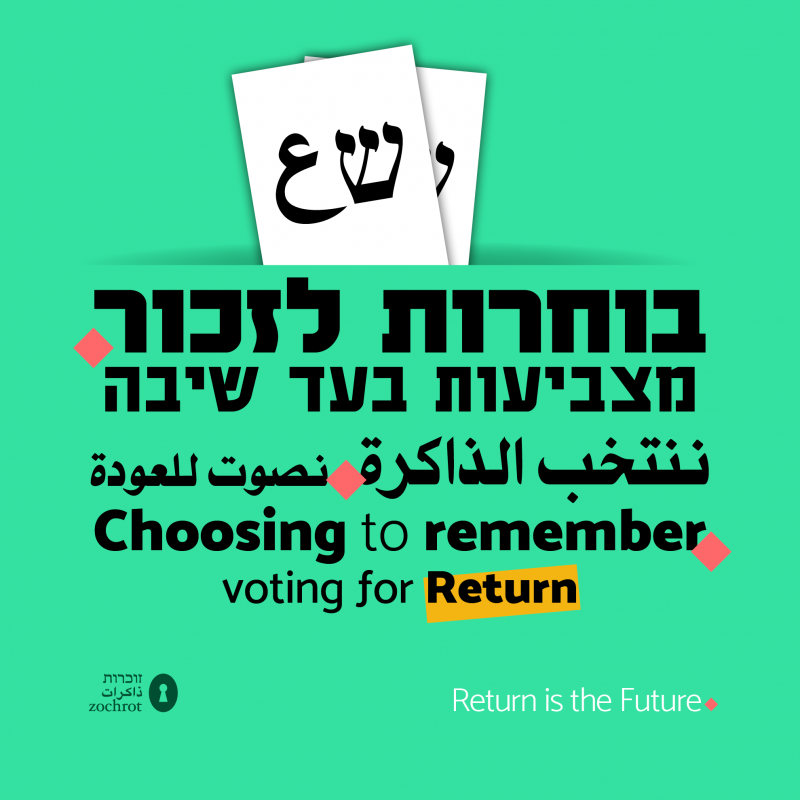 Choosing to remember – voting for return
On March 2, we vote for a just society
2020, Feb
Share it

Choosing to remember – voting for return
Tomorrow, Israel’s citizens will vote for the third time within a year. Once again, the most important and critical issues in our lives here are not part of the agenda or platforms of the Zionist parties. Recognizing the Nakba, including the crimes of 1948 and the ongoing Nakba, is not proposed by any party. Recognizing the right of return and a practical plan for the return of refugees are not even discussed.

The political system and society in Israel continue to deny and erase these issues. This ongoing avoidance turns every election in Israel into a charade of fake democracy. This time as well, the leading candidates for premiership are war criminals. Both Binyamin Netanyahu as prime minister and Benny Ganz as chief of staff have been responsible for repeated bombing and shelling of Palestinians in Gaza and other crimes. Both make it clear that they intend to keep following the same path.
The dehumanization and incitement against the Palestinians, including those who are nominal citizens and their elected representatives, have reached new levels in this campaign. This dehumanization is used to continue the crimes against the Palestinians and uproot them from their land both within the 1948 borders and in the Occupied Territories – abuse, dispossession and injustices that have continued from 1948 to this day. In a word, the ongoing Nakba.

Against this cowardly political bullying lacking in any future vision that dominates the recurring election campaigns, we pose a courageous vision of recognizing past crimes and acting to redress them, for a life of peace in a just society. We choose to remember the crimes of the Nakba, remind Israeli society of them and make them visibly present everywhere, at every opportunity, and to oppose their erasure. We vote for the return of Palestinian refugees and view this return as an opportunity to liberate ourselves of the colonialist mindset and practices that define Israeli politics. On March 2, we vote for a just society.

Refugees Jewish response and coping with the Nakba Return Vision