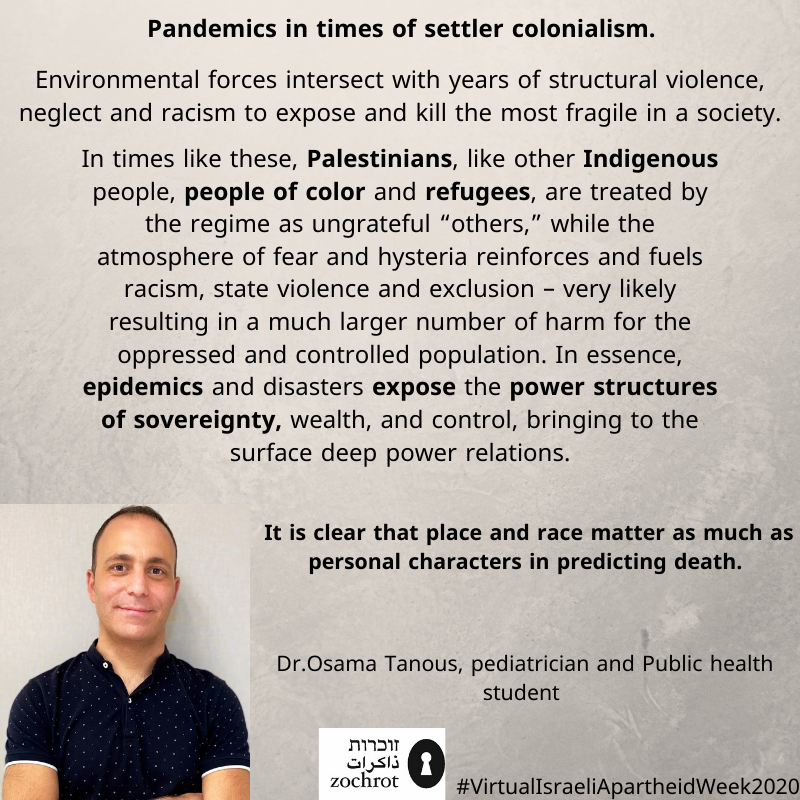 COVID-19 in times of settler colonialism.
In Palestine, the Unequal Effects of an Epidemic

By: Osama Tanous, Pediatrician and a student of public health

We are far from comprehending the full scale of potential harm to people’s lives and the economy due to the COVID-19 outbreak. In the complicated reality of Palestine/Israel, where the outbreak is just beginning, it requires a deeper analysis. We know from history that the poor and oppressed bear the brunt of epidemics and disasters, and thus the danger of this virus for Palestinians is of grave concern.

The Titanic in 1912, for example, carried 2,201 passengers and had the capacity to save 1,178 of them via lifeboats. Though more than half of the travelers could have been saved, only 32 percent survived. When we look at the numbers, it is clear that the chances of survival were not random, but were based on class and privilege. While the survival rate was 62.5 percent among first class travelers, it dropped to 41.4, 25.2, and 24 percent among second class, third class, and crew, respectively. The survival rate for the poorest and the working class was almost half, what it could have been. This differential patterning of survival cuts through eras, geographies, and crises.

In the twentieth century, the Chicago heat wave of July 1995 killed 739 residents. As the bodies were piling up, harsh truths became apparent: Not all neighborhoods and people died equally. Black people’s death rate was almost 50 percent higher than that of white people. Eight of the ten neighborhoods with the highest mortality rate were poverty-stricken black neighborhoods. It is clear that place and race matter in predicting death.

Hurricane Katrina of 2005 was another horrific example of how disasters expose inequality in society, and once again, the black and poor paid the highest toll. Environmental forces intersected with years of structural violence, neglect, and racism to expose and kill the most marginalized. Black people in New Orleans died 1.7 to 4 times more than white people, and four out of the five neighborhoods with the highest mortality rate were predominantly black. Daily existing health disparities and death gaps become more grandiose at a time of health crisis.

Epidemics also put pressure on the societies they strike, and make visible latent structures that might not otherwise be as evident. They provide a device for social analysis and reveal what really matters to a population and whom they truly value.

One aspect of responses to epidemics is the desire to assign responsibility. This discourse of blame exploits existing social divisions, prejudices and racist ideas based on religion, race, or class. It was apparent in the Palestinian/Israeli context when in 1948 Dr. Avraham Katzinilson declared in the Israeli newspaper Haaretz that the complete segregation between the Jewish and Arab populations during wartime was responsible for the absence of infectious diseases like typhus and dysentery.

There are conditions that are specific to settler colonialism, a form of colonialism that seeks to replace the original population of the colonized territory with a new society of settlers. Settler colonialism is enacted by a variety of means ranging from violent depopulation of the previous inhabitants, to more subtle, legal means such as assimilation or recognition of indigenous identity within a colonial framework.

With Israel being a settler colonial society, the medical history of colonialism provides some lessons. Europe unwittingly exported smallpox and measles to the "New World" and Africa via the slave trade, later adding malaria and yellow fever. European empires were struck by panic and colonial anxieties from epidemic diseases. The control of pathogens and the people carrying them was a main source of concern in British India and Dutch Indonesia.

In the United States, another settler colonial state*, the virus outbreak is revealing the cracks in society concerning workers in the gig economy, the poor, prisoners, homeless and uninsured. There are 574 federally recognized sovereign tribal nations located across almost 40 states within the geographic borders of the United States. Native communities are disproportionately affected by health conditions that the Centers for Disease Control and Prevention (CDC) has specifically identified increase the risk of serious complications from Covid-19. Several tribes have opted for “self-determination” with greater financial flexibility and clinical autonomy—as opposed to depending on the federally controlled Indian Health Service (IHS), which has suffered decades of severe underfunding. “We quickly recognized the need to make sacrifices for the greater good, in order to protect our people and the wider community,” said Dr Dakotah Lane, medical director of the tribal health service in the Lummi nation, a sovereign Native American tribe. The Lummi reservation is located in Whatcom County—115 miles north of Seattle, Washington. As the Trump administration stalled, the tribe swiftly introduced mitigation and prevention measures such as social distancing, drive-through testing, telemedicine clinics, and a home delivery service for the elderly.

The well-celebrated Canadian healthcare system is of no exception to how settler colonial states treat its indigenous populations. Unlike the usual performative political cuteness of Justin Trudeau's response to an 8-year-old’s coronavirus letter: ‘We’re working super hard’, Canada has been working "super hard" to make this epidemic more deadly for Indigenous communities. The lack of usable drinking water is only compounded by persistent infrastructure problems facing Indigenous communities, such as overcrowded housing and a lack of sewage systems, as well as years of government neglect. "The long-standing disparities that exist in the way of healthcare and health conditions … put our people, our communities, at a much greater risk," said Dalee Sambo Dorough, chair of the Inuit Circumpolar Council, an organization that represents 180,000 Inuit across Canada, the United States, Russia, and Greenland.

Today in Palestine and Israel, the virus – unlike Palestinian bodies – does not stop at militarized borders to show an ID card at checkpoints. In response to a COVID-19 outbreak in Bethlehem, Israeli Defense Minister Naftali Bennett announced on March 5 that the city would be closed due to concerns about the spreading virus. “Both Israelis and Palestinians will be restricted from entering and leaving the city,” he said. Bennet also declared that if the coronavirus outbreak reaches massive proportions in Israel, "the Defense Ministry will take action.”

It is telling that the blockade and closing of checkpoints in Bethlehem was not followed by similar measures in Tel Aviv or other Israeli cities after similar numbers of patients were diagnosed. Moreover, Israeli Prime Minister Netanyahu was quick to call for an emergency government including both large Israeli Jewish parties but excluding the mostly-Palestinian Joint list, who he referred to as “terror supporters .” In addition, the Palestinians were far from feeling relieved when the ultra-right-wing Minister of Justice Ayelet Shaked declared that she would personally ensure that the electronic surveillance of confirmed COVID-19 patients is done with minimum harm.

The current pandemic also exposes how over seven decades of settler colonial rule, military occupation, checkpoints, and military assaults have engineered a reality of an already dystopian, quarantined, overpopulated, and incarcerated Palestine. In the dense Gaza Strip, where some 2 million people are besieged, with overburdened and crumbling health facilities, already deemed “unlivable” by the UN, any potential coronavirus case there could create an unimaginable health crisis. In the fragmented and divided militarily occupied West Bank the situation is not much better, Weeks before the imposed restrictions doctors went on strike protesting the fragility of the system and work conditions. Its crumbling health care system will also be pushed to the brink. Palestinians within Israel, living in townships of concentrated density and poverty and portrayed by the regime as a “security threat,” lack the same access and equal care as Jewish Israeli citizens. Palestinians—the refugees—many of whom languish in camps, are dependent on donors’ health services, live in a ghettoized reality, and face blatant discrimination from host countries and communities

Lastly, the most vulnerable of us all, Palestinian prisoners in Israeli Prisons, medically neglected, in small crowded unventilated cells, ideal for virus spread, where the prison authority has taken measures to prevent lawyers and family visits without providing information on how it plans to tackle the health crisis.

In times like these, Palestinians, like other Indigenous people, people of color, and refugees, are treated by the regime as ungrateful “others,” while the atmosphere of fear and hysteria reinforces and fuels racism, state violence, and exclusion—very likely resulting in a much higher amount of harm for the oppressed and controlled population. In essence, epidemics and disasters expose the power structures of sovereignty, wealth, and control, bringing to the surface deep power relations.