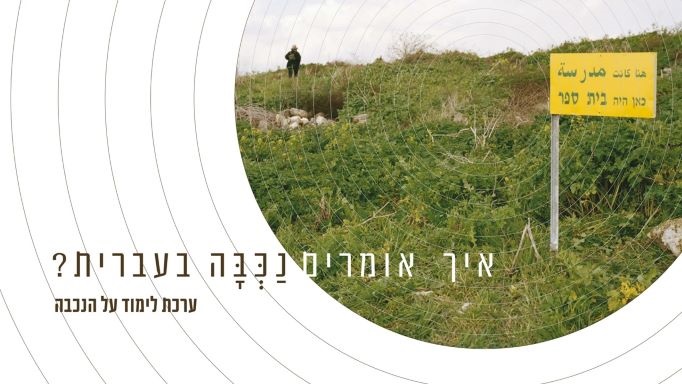 Study Guide / How do we say Nakba in Hebrew?
Brochure for educators about the study guide

The Nakba is the Palestinian catastrophe of 1948: the destruction of localities, the expulsion of inhabitants, and the erasure of Palestinian life and culture as they existed until 1948. The Nakba is a foundational event in the Israeli-Palestinian conflict, one that constitutes our lives even today, but it is also an event that has been largely silenced, one that has little place in Israeli society.

“How do we say Nakba in Hebrew?” is a unique study guide about the Nakba for teachers in the formal and informal Israeli-Jewish educational systems. The study guide contains 13 units, each of which includes lesson plans and activities tailored to students aged 15 or older. Three years in preparation, the study guide was researched, written, designed, and assessed by teachers and by Zochrot's staff.

Learning about the Nakba through the study guide in Israel engages students in questions about their identities as Israelis-Jews, about places in Israel that they know well, and about their own collective memory. More advanced concepts examine hegemonic versus silenced histories, what it means to be a refugee, and reconciliation, among other topics.

The study guide is grounded in the principles of critical pedagogy. It seeks to provide students with tools for interpreting the reality in which they live, coping with it emotionally and intellectually, and exercising critical thought. Methodologically, the guide is multifaceted, using primary and secondary historical sources, films, photographs, artwork, demonstrations, and computer presentations, as well as unique original materials prepared especially for this project.

The Nakba is the calamity of the Palestinian people, but it is also the story of the Jewish people who live in Israel. Learning about the Nakba challenges the foundations on which many Jewish Israelis were raised. But it also has the potential to create a future based on reconciliation and to establish a new set of relationships between Israelis and Palestinians, grounded in respect, mutual acknowledgement, and responsibility.

Contents of the study guide

The study guide has been organized to work either linearly (progressing from Unit 1 to Unit 13) or modularly (using any combination of units independently). The key words attributed to the different sections allow teachers to combine the different units according to a variety of pedagogical approaches and topics.

Unit 1: We’re On the Map
Unit 2: Landscapes of Home
Unit 3: Gentlemen, History is Histories
Unit 4: Nakba – Shu hada?
Unit 5: Both of Us, and One Village
Unit 6: And You Shall Recount it to Your Sons and Your Daughters
Unit 7: Arise, and Walk Through the Land
Unit 8: Searching the Home Page
Unit 9: The Land of Sad Oranges
Unit 10: Atten-shun!
Unit 11: Time Passes, a Place Changes
Unit 12: 'That’s Not Something We Talk About'
Unit 13: Forever and Ever is a Very Long Time