Haifa tour - Report During the tour, which lasted for nearly two hours, signs were posted bearing street names as they were known before the Nakba, in Arabic and Hebrew

On November 6, 2004 Zochrot hosted an educational tour on the Palestinian Nakba in the city of Haifa. The program began with a walking tour of Arab Haifa, guided by Dr. Johnny Mansour, who spoke about the pre-Nakba history of Arab Haifa, and specifically about the vanished landmarks of the town, as well as the changes which have occurred since that time.

During the tour, which lasted for nearly two hours, signs were posted bearing street names as they were known before the Nakba, in Arabic and Hebrew, including Umiyya Street, El-Iraq Street, El-Rahibat Street, and El-Burj Street.

At 1:00 pm the group moved on to the Al-Midan Theater. Zochrot activist Nada Matta gave an introduction about the organization and its activities in Haifa, and about the programs which will be run on a regular basis in Arab towns and villages, like that held in Haifa on this occasion. Next, Saleem Abu Jabal and Ranin Bisharat read testimonies on the occupation of Haifa on behalf of three people, Abu Salem Ibrahim Berumi, Georgette 'Awad, and Sheikh Mushaqaq El-Wajeh, taken from the book "We Will Never Forget" by Salman Natour. After these readings, Terese Suleiman sang two songs by Umeima Al-Khalil. This was followed by readings in Hebrew and Arabic by Saleem Abu Jabal of two of his poems on the evacuation from Haifa.

Finally, Dr. Mahmoud Yazbek gave a fascinating lecture on the demographic and social evolution of the city of Haifa from its establishment by Dahir El-'Amr, an 18th Century governor of Palestine, to the first years of the British Mandate. In his lecture, Dr. Yazbek focused on the collective life of all people living under Ottoman rule in the town – Muslims, Christians and Jews – prior to the intervention of Western colonialism in general, and Zionist colonialism in particular. At the end of the lecture, Dr. Yazbek answered questions from the audience.

Postscript: After the tour, Haifa residents complained to City Hall that someone had 'moved the streets' in their city. See the amsusing response here. 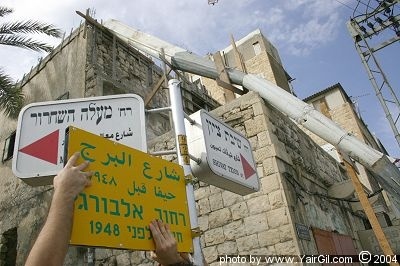