al-Ramla tour - Report " In practice, the IDF broke the agreement. The residents were taken out of their homes. Some of the families were expelled in the direction of the Jordanian forces. Some of the men were gathered together and were expelled to al-Jlil, where there was a la

On Saturday, December 11, 2004 Zochrot toured Ramle – its original name ‘al-Ramle.’ The tour began at the White Tower at the heart of the old city. In the background was the multi-domed Ramle mosque, not far from the immigrant neighborhoods for European Jews.

In the shadow of the tower, a proud monument of another time, we met our tour guide, Abu Nijam, who grew up in Arab al-Ramle and who today lives in Jewish Ramle. Abu Nijam led us through different stations in his memory of al-Ramle.

At the foot of the White Tower called “Prophet Salah” Arab al-Ramle began to arise before our eyes. Ramle was founded in 715 A.D. by Suleiman al-Malek. The city was intended from the start as the capital of Palestine, to replace Caesarea. The site was chosen due to its location on a historical seaside path, as well as because it was situated half-way between Jaffa and al-Quds, which were beginning to develop anew following the Muslim conquest of Palestine. According to Abu Nijam, the city was full of commercial life and artisans’ workshops. It had a painting workshop and a coin foundry. Myth had it that the residents of other villages and cities were so jealous of al-Ramle that they tried to steal the city’s White Tower… apparently without success.

From Prophet Salah tower we departed to tour the streets of al-Ramle of the past. We walked along the western border of the old city (Weizmann St. today). Beside the elaborate house of Shukri Abu Razek we stopped for the second station, where we heard about Ramle in the 18th to 20th centuries. Abu Nijam told us about life in Ramle and about the well-to-do families who lived in the city. Across from the house of Abu Razek, which today is used as part of the municipality of Jewish Ramle, we posted a sign on Jaffa – Al-Quds Road, today called Herzl St. The sign is a reminder of the Palestinian passengers who passed through the center of Ramle on their way between the mountain and the plain.

Another station was across from the Christian cemetery in the city. The tour was suddenly interrupted by the arrival of one police vehicle and then another. The police wanted to know what a group of 200 people were doing in the middle of the afternoon on the main street of the city. The police questioned us and instructed us to take down the sign that we had posted. They also warned us not to post any additional signs.

We proceeded a bit further with the blue-uniformed guests following close behind. At President Park, Abu Nijam told us how the occupation and expulsion of Ramle was carried out. Ramle had withstood the war for a  number of months before the Etzel forces succeeded in conquering it. In July 1948 the IDF planned Operation Danny under Plan D, the aim of which was to occupy Ramle, Lod, and the surrounding area. Almost no-one had left Ramle until then, despite the Zionist propaganda that called on Arabs to uproot themselves from their homes. Ben Gurion supported the commanding officers of Operation Danny, such as Yigal Alon and Itzhak Rabin, in forcing out the Arabs of Ramle and Lod, by signally with a wave of his hand to expel them.

Abu Nijam: “There was an agreement between the IDF forces and between the head of the municipality of Arab Ramle. Ramle would surrender to the IDF forces and the residents of Ramle would remain in their homes. In practice, the IDF broke the agreement. The residents were taken out of their homes. Some of the families were expelled in the direction of the Jordanian forces. Some of the men were gathered together and were expelled to al-Jlil, where there was a labor camp for Palestinian prisoners. Some of them were brought back to the city in 1948 and were concentrated together with the rest of the population that had remained — about 700 to 900 people in few houses that were enclosed by a wire fence, deprived of the right to freedom and movement. There was a problem of money, food and other things.”

From the park we turned to the church which hosted us in the last part of the tour. On the way we crossed through the ruins of the old city. From almost 3,000 Arab houses  that survived at the end of the 1948 war there remain crumbling arcs and silent stone walls. In the heart of the ruins there is one road that was restored. The saddest part  is that some of the Palestinian residents of Ramle must live in these stone ruins, and are pressured to leave even from there.

In the church we saw an excerpt from a moving film that was prepared by 9th grade students of the Orthodox School. The film was produced under the supervision of Ms. Khoury, who works on the issue of residential shortages for the Palestinian residents of Ramle.

Three people gave testimonies on what happened in 1948. We were particularly struck by the sense of fear that gripped those who remained in Ramle. Most of them fled to the church, where they found temporary refuge and a small amount of spiritual and material sustenance. The occupation was felt very quickly given the mass expulsion of the residents and the boarding up of houses to dissuade families from returning. The state of Israel quickly settled Jewish immigrants into those houses and many of the Palestinian residents of Ramle found themselves refugees in their own city. Sometimes, one of the witnesses said, people were forced to buy their own homes back from the state. Out of all the residents of Ramle only four or five families live today in their pre-1948 homes.

After we finished the event in the church, Eitan Bronstein was called to the police station for questioning. It was an almost comical event. Eitan showed the police officers the booklet that had been prepared for the tour, and they showed some interest in it. Eitan was forbidden from returning to Ramle for 8 days. 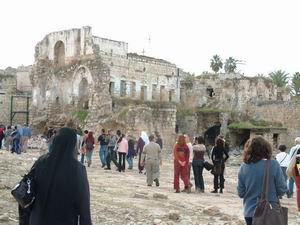