'Ayn Karim tour - Report On Saturday, 29.11.08, some 200 people – men and women, Palestinians and Jews, young and old – participated in our study tour of Ayn Karim, the Palestinian village.

On Saturday, 29.11.08, some 200 people – men and women, Palestinians and Jews, young and old – participated in our study tour of Ayn Karim, the Palestinian village.

The tour began at “al Haraja,” the village’s central square prior to the nakba.  It was where the villagers would meet each other in the evening, and was a market during the day.  Merchants would come from other villages in the area – from Sataf, al-Qastal, Khirbat al-Lawz, Suba, Qalunya [Motza, Mevasseret Yerushalayim], Lifta, Dayr Yassin [Giv’at Shaul], al-Malha, Beit Mazmil [Qiryat HaYovel], al-Jora [Ora], and others.  Like Ayn Karim, all these villages were cleared of their Palestinian inhabitants in 1948, and most were resettled with Jews by the new occupying power.  Ayn Karim was a large, important village, and until mid-1948 almost 4000 people lived there.  Most of them left to seek refuge before their village was attacked, after they received word of the slaughter armed Jews carried out in the neighboring village of Dayr Yassin. Young men from Ayn Karim who had weapons stayed to defend the village.

The tomb of Sheikh Ubeid stood in al-Haraja, and there was a mulberry tree under which the Palestinian elders would sit.  Today, that tree sadly overlooks a parking lot that covered over the sheikh’s tomb.  Nearby, in what had once been Palestinian homes, the Chabad House and the Ayn Karim Central Synagogue sprang up.  This was the Ali family’s neighborhood, and behind us the al-Hara neighborhood.  Ayn Karim’s conquerors didn’t destroy the village houses, as they did in most of the Palestinian villages they captured.  Jews moved into the houses to live.  The village stands today almost as it did before the nakba.  Israelis living in the homes of Ayn Karim’s refugees are proud that they succeeded in “preserving” the village, to care for it and transform it into a special place that attracts tourists.  In fact, people coming today to the village, who see only what they’re shown, enjoy the wonderful pastoral atmosphere, visit a number of impressive churches, are amazed by the architecture of the Arab houses, wonder at the splendid landscape, dine at a restaurant and hear about the ancient history of the fourth holiest place of the Christian religion.  Our tour, aided by information received from the village’s refugees and from a son of the village, Mr. Hisham Abu Roza, a member of the nakba’s second generation, showed how, in fact, the village had changed, had not been preserved, unlike what Israelis think.  The residents were replaced, the language became Hebrew, the streets and lanes received new names, a number of private homes turned into synagogues, the mosque was sealed, the central cemetery was desecrated, and the school, on the mosque’s second floor, disappeared.

Moshe Amirav, a public figure and political activist, the author of a book about the village, lives in a house that belonged to a refugee from Ayn Karim.  He participated in the tour, and said at the start that he’s comfortable living in the home of someone who became a refugee.  He’s willing, as a gesture, to establish a museum commemorating the Palestinian nakba, but the refugees should not be returned to their lands.

The purpose of the tour is to challenge such views, and disturb the conqueror’s peace of mind.

We took the “tareeq al-sabrat” [the sabra’s path] toward al-murooj [the valleys], the Zaghab family neighborhood, Hisham’s family.  Hisham brought his 15-year old son along on the tour.  A “Museum of Biblical Times” had been established in one of the village houses.  It’s home of the Raheel family.  Jabr Raheel, one of the family’s young men, fell in love with Allegra, a Jewish girl from Mahane Yehuda who met him when he was riding the white horse he received as a gift from his wealthy father.  Despite the opposition of both families, Jabr and Allegra married in 1929.  Allegra even converted to Christianity, her husband’s religion.  Romance – before the nakba.

Hisham took us to the house in which his father was born and grew up.  It’s near the Sisters of Zion convent.  After the Six Days War in 1967, his father came to visit the village.  The Israeli inhabitants didn’t allow him to enter his house.  Hisham recounts the emotional meeting that day between his father and a nun who had been his neighbor before 1948.  Hisham’s son stands next to his father the entire time, hearing the stories about the village.  We walked through the “Christian neighborhood,” near the homes of the Ja’anin and the Roq families, next to the church of St. John.  They’re also inhabited by Jewish families.  We reached the main cemetery of the village, a Moslem cemetery.  It’s not far from the village center, on the main street, below the al-Tuwwar family neighborhood, across from what had been the olive press that belonged to the Boulus family, today a restaurant.  The Christian cemeteries were located within the grounds of the churches, and were preserved.  At this cemetery we could see the horrors of its desecration, and the attempt by one of the Israeli families living near the graves to pave a path to their home through the cemetery.  The matter reached the Israeli courts which decided, in response to a petition from the Moslem Waqf, to stop the work, but it continued.  The sign we erected there is intended to make clear to passersby and to the neighbors that this is a Palestinian cemetery.

A mosque named for Umar ibn al-Khattab, who reached Palestine in 638 and apparently visited this site, had been built above the spring.  At the beginning of the 20th century a new mosque was built, his second floor served until 1948 as the village’s public elementary school for boys.  There were additional schools run by the churches.  The second floor was demolished in the 1960’s.  The mosque still stands, but entry is forbidden and all its openings have been sealed.  Some of the men and women who participated in the tour went up to the roof of the mosque and prayed.  Hashem prayed as well.  People were moved by the sign we had prepared, reading “The village mosque and Mary’s Well,” and competed to install it.  The house of al-Haj Isma’eil still stands next to the spring.  He lived there at the end of the 19th century, and for a year hosted in his home the British general Charles Gordon, who had come to the village to study the history of the local Christians.  Al-Haj Isma’eil’s house is today a music center and private home of an Israeli family.  Tareeq al-Ta’ameer begins there, leading west to the Church of the Visitation.  At the beginning of the road stood the al-‘Arab coffee house.

The flight of most of Ayn Karim’s inhabitants in May, 1948, in the face of Israeli aggression, did not cancel the Haganah’s plans to capture the village.  According to Benny Morris, Israeli forces shelled the village from two hills overlooking it, Beit Mazmil [Qiryat HaYovel] and Khirbet al-Hamameh [Mt. Herzl].  The few armed Palestinians in the village fought the attackers on the two hills, and 3-5 people were killed, until their ammunition ran out and they withdrew from their village, which was finally captured in mid-July, 1948.

Among the many participants in the tour were some current Israeli residents of Ayn Karim.  The tour showed them a place that was different from the one they had known up to now.  The average person can’t remain indifferent to the huge gap between what’s visible and what’s hidden in the village of Ayn Karim. 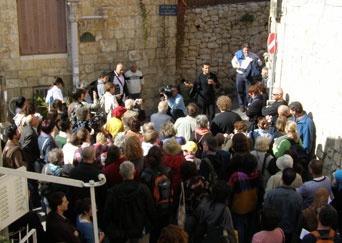 Mosques Churches Tombs Jewish response to the right of return