'Ajjur tour - Report The announcement of Zochrot's tour of the village of Ajjur, that was destroyed during the nakba, made the police in Beit Shemesh and Tel Aviv go on the alert and caused sleepless nights for JNF staff. They tried to prevent the tour.

The announcement of Zochrot's tour of the village of Ajjur, that was destroyed during the nakba, made the police in Beit Shemesh and Tel Aviv go on the alert and caused sleepless nights for JNF staff. They tried to prevent the tour. Eitan, from Zochrot, received phone calls on Friday, the day before the tour, from the police commander in Beit Shemesh and from JNF staff, demanding he cancel the tour to Ajjur. They pressured and threatened him, argued that the activity was illegal, and made other claims. The announcement that we planned to harvest the olives in the groves belonging to the refugees, that are controlled today by the JNF, and send them to their owners who are living now in Hebron, drove the JNF staff wild. They called the police and set them on Zocrot, claiming that we were destroying JNF property and erecting signs bearing the village's name and describing its sites.

Our position was that the tour would go ahead as planned.

On Saturday morning two police cars were already waiting at the location in Tel Aviv where Zochrot had arranged transportation for the tour. They inspected the bus driver's licenses, saw that the tour was going ahead, and left. A little before we reached Ajjur, the commander of the Beit Shemesh police station contacted me to ask when we would arrive. He pronounced "Ajjur" as it would be pronounced in Arabic. It turns out that the Arab name for Ajjur wins the battle of the names. I explained that we were delayed by a bicycle race being held in the area, and that we're very near – near Beit Govrin, I said. Beit Jibrin?, he asked, again "Jibrin," with the Arabic pronunciation. Another point for the Palestinian name. He shared with me his insight that we didn't get the message not to go through with the tour because it's illegal. He asked us to stop at the entrance to Luzit, not far from Ajjur.

Luzit had been established on the land of the Palestinian village Dayr al-Dhubban, near Khirbat al-Luz. Two police cars waited there for us. An officer came over to me and asked – very politely, I should note – just what was going on. Eitan and I detailed the program. The officer told us unequivocally that we were prohibited from harvesting olives and erecting signs. Picking the olives was, from our point of view, a statement that they belong to the refugees and not to the JNF; we won't take much, we explained. Regarding the signs, we'll erect them, but we promised not to leave them standing there. At the end of the discussion the officer and gentleman told me, again very politely, that I'm invited for questioning to the Beit Shemesh police station because the JNF filed a complaint against me.

We continued to Ajjur, one police car in front of us and another behind. More police waited at the first stop of the tour, the "butterfly" parking lot in The Brittish Park, some in blue uniforms and some in olive green. There were also a few angry men, civilians. It looked as if they came with the police. At least one of them was carrying a pistol, sticking out of the back of his waistband. They were from the JNF. The "butterfly" lot had been Ajjur's marketplace. Hundreds of merchants and customers came here each Friday from throughout Palestine to participate in a vibrant market, until the conquest of the village by Israel brought it to an end. Today, Saturday, October 25, 2008, there were many people here. But there was no merchandise. Nor were there Palestinians, other than me. The ethnic cleansing of the 16 villages in the area was almost perfect. All the residents of Ajjur were chased out, and whoever didn't flee was later expelled, purposely, to Hebron.

More than 4000 people lived here until the beginning of the nakba. Across the road is the neglected cemetery. Prickly pear cactuses, olive groves, fig trees, carobs and other trees still stand on Ajjur's wide hilltops. Most of the village's houses once stood on the bare hill before us. About 600 buildings. They are no longer there. Only four remain: Ajjur's clinic, today a restaurant; the remains of a building which held the village's olive press and flour mill; a grand, well-preserved house that belonged to the al-'Azza family, occupied today by an Israeli family that runs a Chamber Music house. Another private home, belonging to Abd al-Hamid al-'Azza, stands neglected in ruins.

We left the area of the marketplace and rode in the bus toward the other remains of the village. As we left, the JNF people tried to provoke us by singing in Arabic "Biladi, biladi." The policemen stood smiling next to them. The bus followed a police car that led the way, and another police car followed. A JNF ATV came after it. At the entrance to Agur, the moshav, next to the electric gate, stood another police car and blocked the road. They "feared" we'd enter the moshav. It had been established on Ajjur's land, though not on the ruins of its buildings. It wasn't part of our program.

The last stop on the tour was the melancholy home of Abd al-Hamid al-'Azza, that has stood for 60 years – today, with great difficulty – atop the hill, looking over the changing landscape, and at buildings raised up on the land across from buildings that were torn down. It was almost one in the afternoon. We gathered next to the house to wrap up the tour. The fifty participants had a lively, interesting discussion. On the way back a few of them picked some olives, and mumbled things to themselves that no once could hear. 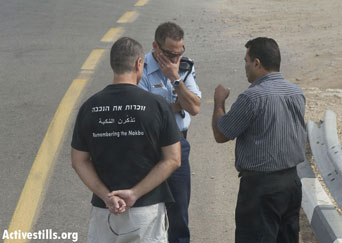