al-'Ajami/Jaffa tour - Report In 1948 about 4,000 Palestinians remained in Jaffa out of some 120,000 residents. All of them were concentrated by the Israeli military in the al-'Ajami ghetto and were surrounded by a barbed wire fence for a number of months.

On Saturday, September 8, 2007, we held a tour of Jaffa's Ajami neighborhood. About 150 people took part. We distributed the booklet "Remembering Jaffa's Ajami Neighborhood", which was produced especially for the event, to tour participants and to passersby.

The tour progressed through the major turning points in the history of Jaffa , and particularly of the al-Ajami neighborhood, since the beginning of the Nakba in 1948. The first and major depopulation of Palestinians from Jaffa took place during the Nakba, and since then there have been waves of home demolitions, up to the eviction warrants and the destruction of 2007. ‎

In 1948 about 4,000 Palestinians remained in Jaffa out of some 120,000 residents. All of them were concentrated by the Israeli military in the al-Ajami ghetto and were surrounded by a barbed wire fence for a number of months. Many of them live in the al-Ajami neighborhood today as the "protected" residents of the Amidar company, which won ownership of Palestinians' homes and housed new residents in them. Today about 500 families in Jaffa - primarily in al-Ajami - are being threatened with eviction notices from the Amidar company, for the benefit of developers and wealthy urbanites. ‎

During the tour we stopped by a number of homes that the Amidar company is bent on evacuating such as the homes of the Faran, Mahamid and Hattab families. We heard the story of the Addasi family and we saw the site where their house stood until its demolition two months ago. Many residents and activists view the actions of the establishment as a continuation of the Nakba against the Palestinian people, a continuation of the policy of cleansing and eviction that the authorities have waged since 1948. ‎

When we passed through the streets of the neighborhood we learned about their original names. At some streets we posted new signs with the old names - at Yeffet Street which was once al-Hilwe Street and Sha'arey Niknor which was once Tallamas. ‎

The tour was carried out together with the Arab Association of Jaffa; Mr. Abed al-Satal, a member of the Association's management, led much of the tour. The National Committee for the Protection of Home and Land in Jaffa also participated in carrying out the tour; the Committee was represented by Fadi Shbeita, who spoke about the struggle being waged against the authorities and the difficult situation of al-Ajami's residents and their attempts - which so far have failed in the face of the municipality's bulldozers - to rebuild the home of the Addasi family. There we stood. In place of the house they destroyed, the city planted lovely olive trees. ‎

Dr. Daniel Montrescu lectured on the building plans in the city of Jaffa over the years, on the policy to change the face of the city from an Arab city to a Jewish city, and on deliberate neglect. We heard these statements as we stood on a garbage dump, a point of derision for Jaffa 's residents. The city intended for the garbage dump to expand Jaffa 's beach line and widen the distance between existing houses and the sea, for the benefit of new construction and a boardwalk. Later, city experts discovered that the garbage could not serve as a foundation for new construction. The municipality changed its course. After it failed to push back the sea it sought to push back people, destroying their homes and constructing new buildings. The top of the garbage dump overlooks a breathtaking, panoramic view of the seashore and of Jaffa , of empty lots on which once houses stood, of houses under threat of demolition beside new buildings that were constructed on the ruins of other homes. Arising from the hill of garbage is the smell that reminds those who are impressed by the view that something here stinks. 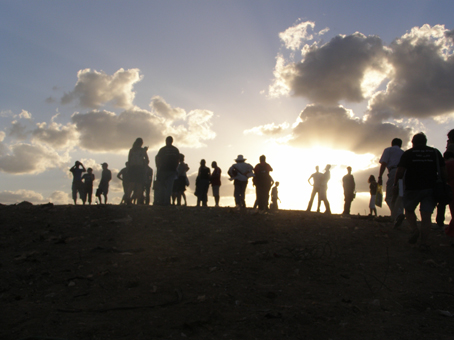