at al-Tira / Haifa Tour - Report We proceeded north on HaPalmach St. and turned right on HaCharuv St. After about 100m we arrived at a public park (to the right). This park was built over ruins of old village buildings, including an ancient mosque and the village public courtyard called

We started our tour at Tirat Carmel's police station, in the corner of HaPalmach and Laniado Streets.  The building was built in early 1948 as Village Chief Abdullah Salman's residence; regrettably, he hardly had time to enjoy it.

We walked down Laniado Street, passed by the public Sunrise Park and reached the end of the street. To the east (in front of us), we saw a sign saying Monheim Park. The park is dedicated to Monheim am Rhein, Tirat Carmel's German twin city. To the left, on al-Quff Hill, we could see a deserted building on 12 Laniado St., one of two buildings that used to house the Palestinian village's boys' school. A sign on the building states that soon a boutique hotel called Villa Carmel will be built here. Therefore, the landscape described here may change by the time you visit there. We erected a sign next to the building saying Tirat Haifa School.

Before proceeding up the hill, we turned left towards Shifman School to see that the arched building is indeed the same building that housed the Palestinian school until 1948. If you manage to enter the school, you will be able to see an Arabic inscription over the entrance door. We returned to the hill, and from a vantage point next to the deserted school building we could clearly see Haifa's Denya Neighborhood on the opposite hill to the north – the source of most bombardments and attacks on al-Tira in 1947-48. On the hill slope between the riverbed and the edge of Denya used to be a residential neighborhood populated by the al-Bash clan. Today, only few remains of the destroyed houses can be seen, next to cactus trees, pine trees and thorns.

The road running along the riverbed to the east (to the right if you are standing on the hill and looking at Denya) used to lead to the village spring, and was therefore called Tariq al-'Ein (Spring Road). Abu Nizar(68), a refugee from the village, now lives in Haifa, told us that the house where he was born still stands on Tariq al-'Ein. About 100m from the deserted school building to the northeast down the hill we could see the half-destroyed al-Labani family house.

We walked back to Laniado St., took  the first turn right to HaZait St. , then turned left to HaDekel St. and at the end turned right on HaPalmach St. On 12 HaPalmach St. stands Em HaBanim Synagogue. This used to be the village mosque, which was expanded and converted into a synagogue. Opposite the synagogue, on the corner of Ha'Atzmaut St., we could see a single-story building that looked older that the adjacent buildings. This is an original building of the Palestinian village, which was used until 1948 as a café and restaurant center. Today, it is used for various purposes, including a carpentry shop and the synagogue's ladies' gallery.

We proceeded north on HaPalmach St. and turned right on HaCharuv St. After about 100m we arrived at a public park (to the right). This park was built over ruins of old village buildings, including an ancient mosque and the village public courtyard called al-Manzul. This was where the villagers were grouped by the occupying Israeli military in 1948, pushed on buses and expelled to the Jenin area.

After walking down HaCharuv St. we could see on the left (to the north), along the street and on the hill slope, another village neighborhood. The Hajir family used to live there. In one of its houses, 13 people – including women, children and elderly – died when the Irgun militia blew it up on December 13, 1947. The State of Israel later demolished all the houses on the hill, and today all you can see are remains and cacti. There is also an old domed building – Shaykh Khalil's Tomb.

Down the road, near house no. 32, we reached al-Tira's main cemetery – the only one left. Israeli authorities destroyed the Palestinian village's other five cemeteries. The cemetery used to be surrounded by other village neighborhoods, which are now gone. At the eastern edge of the cemetery there used to be a pond with five spigots carrying water from the spring to the village. Today a new residential neighborhood is being built here, and the water facility is destroyed.

Kariman al-Far, a Palestinian young woman now living with her family in Sweden, joined our tour to visit her village for the first time. She asked Abu Nizar to take her to the water fountain as requested by her parents, who remember the pond and the spigots as one of the important sites of their village.

On the way back, Abu Nazar showed us several other Palestinian buildings scattered in today's Tirat Carmel, including the girls' school on 32 Herzel St.

Zochrot's tour ended here. Forty people participated. During the tour, we erected signs, handed out the Remembering al-Tira – Haifa booklets printed especially for the tour, received explanations about the village history by refugees and discussed the Nakba and the Return. 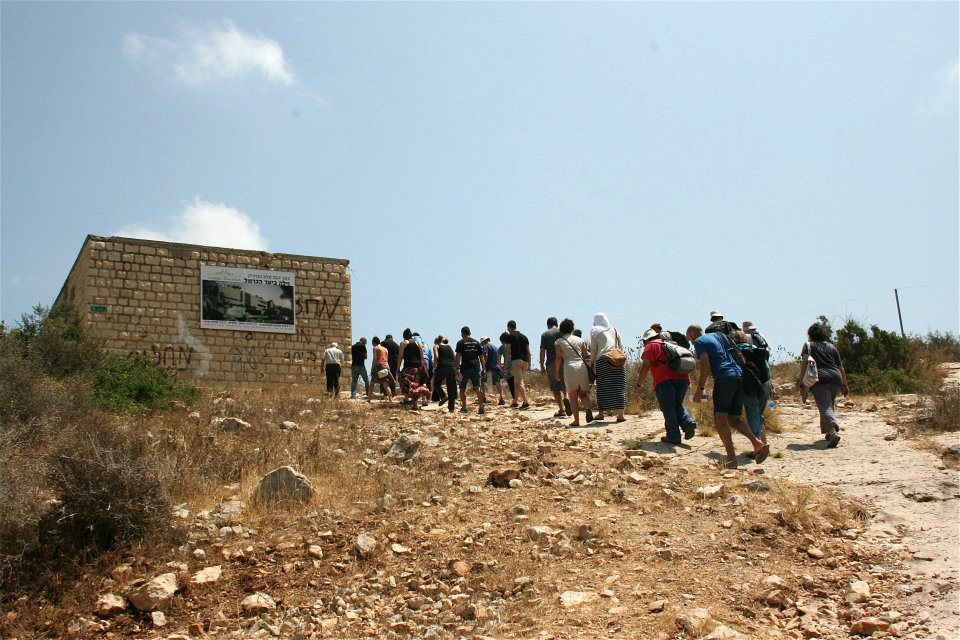