Zochrot are happy to invite you to the 48mm Film Festival From Nakba To Return that will take place on December 8, 2018 in Ma’aloul and December 13-15, 2018 at the Tel Aviv Cinematheque and the Left Bank Cine Club.

Zochrot’s annual 48mm Film Festival brings together cinematic works dealing with the Nakba and the return of Palestinian refugees from various perspectives and in different places and times. Shedding new light on historical and contemporary events, the films encourage us both to think about the place we live in and to imagine its future differently.

The sixth edition of the festival will include Homage to Michel Khleifi organized together with the Association for the Defense of the Rights of the Internally Displaced in Israel and the Left Bank Cine Club.

Tour of Ma’aloul and screening in the village church.

Until recently, the original inhabitants of the Galilean village of Ma’aloul, destroyed by Israel after the 1948 War, were only allowed to visit their old village once a year, on Israel’s Independence Day. The film follows them on that day and reveals a world of painful memories as well as the villagers’ profound determination to cling to their ancestral land.

Beirut, today. Wardi, an eleven-year-old Palestinian girl, lives with her extended family in the refugee camp where she was born. Her beloved great-grandfather Sidi was one of the first people to settle in the camp after being uprooted from his home in 1948. On the day Sidi gives her the key to his old house in the Galilee, she fears he may have lost hope of someday returning home. As she searches for Sidi's lost hope around the camp, she learns the story of four generations of her family and their complex relationships with hope. The film offers an intriguing mixture of puppet animation with 2D techniques, bitter coffee and sweet tea, family saga and national history.

The Apollo of Gaza

In 2013, an ancient statue of Apollo was found in the waters off Gaza - before disappearing under mysterious circumstances. Is it the work of forgers, or a gift from the gods to Palestinians desperately in need of hope? Soon the rumors start to swirl, while behind the scenes local and international players start jostling - some driven by historical preservation and others by purely commercial interests. The Apollo of Gaza is both an archeological thriller and an engaging reflection on the passage of time and the fragility of civilizations. Like a meteor streaking across the sky, the statue of Apollo has brought a moment of light and beauty to Gaza. Where and why has it gone?

Azam Salame, a Palestinian theater director, directs an autobiographical play in the mixed Jewish-Arab city of Acre. The play takes place in 1947, during the final days of the British Mandate, and tells a love story between his grandmother, singer Layla and Dr. Alfasi, the last Jewish resident who remained in the city during the war of 1948. The play comes under threat from both Arabs and Jews and never sees the stage. This film is the only remaining testimony to Azam’s magnum opus.

Wedding in Galilee, a richly detailed allegory of marriage, tradition and national identity, put both Palestine and Michel Khleifi on the international cultural map. Beautifully shot in Khleifi’s characteristic blend of lyricism and high drama, it tells the story of a village mukhtar determined to hold his son’s wedding despite the military curfew. The army commander agrees on the condition that he and his officers be invited as guests of honor at the ceremony. Khleifi’s extraordinary first feature is an erotic and often compelling meditation on two conflicting cultures attempting to put aside their differences for one long day of celebration.

The first feature ever filmed in Gaza tells the story of 12-year-old Youssef who escapes the chaos of the ongoing Israeli-Palestinian conflict by looking for birds in the tranquil countryside. One day his search is interrupted by Aida, a ravishing Gypsy girl. Youssef is immediately smitten, ready to do everything to fulfill Aida’s wish and win her love. The film is an intensely beautiful story of romantic longing and the power of imagination set against the grim backdrop of war-torn Gaza.

The year is 1992 and all communication between Israelis and PLO members are still forbidden by law. Rabin and Arafat view each other as terrorists and the violence on both sides is escalating. In a last attempt for peace, a group of negotiators is sent to Oslo for a secret meeting. Against all odds, they must succeed where their leaders have failed. The Oslo Diaries is a riveting account of 1,100 days of secret talks. Using the personal diaries of both Israeli and Palestinian participants, the film provides new insights into why peace keeps failing in the longest ongoing conflict of our times.

Samir, owner of a shoe store in Ramallah, has never been to the sea. At age 43, he decides to sneak past the Israeli border to fulfill his dream of seeing the sea from up close. How much would he be willing to pay for the forbidden pleasure that keeps evading him?

Three generations of the Bisharat family in the US have maintained their emotional attachment to their family home in Jerusalem’s Talbyia neighbourhood, taken over by Israelis in 1948. Among them is 21-year-old Valerie who travels across the world to visit her grandfather’s house, and eventually meets its current inhabitant, 96-year-old Gisele.

Khleifi’s feature debut portrays two Palestinian women: Sahar Khalifeh, a young novelist from the West Bank, and Rumieh Farah, a working-class grandmother from Nazareth. The film was a groundbreaking work, both on a political and aesthetic level, treating the theme of womanhood under occupation and in a male-dominated society in a haunting lyrical style. Rumieh fights an unending legal battle with the authorities who confiscated her ancestral land after 1948. With her family scattered all over the globe, she doggedly maintains a dignity and passion that for her are the difference between mere subsistence and clinging to the land. Representing both contemporary Arab womanhood and vanguard Palestinian conscience, Sahar must balance the changes in her world after the 1967 war with the changes in herself after achieving personal emancipation.

AMOS GITAI THEN AND NOW

Produced forty years ago, this canonical work chronicles a residence in Jerusalem’s German Colony that belonged to Palestinian doctor Mahmoud Dajani until it was expropriated in 1948 and became home to Jewish immigrants from Algiers. Later purchased and remodeled by an Israeli professor, it is a metaphor for the clashing narratives of Jerusalem and the country as a whole.

A Letter to a Friend in Gaza

After the screening, a debate on refugees in their homeland with:

Until recently, the original inhabitants of the Galilean village of Ma’aloul, destroyed by Israel after the 1948 War, were only allowed to visit their old village once a year, on Israel’s Independence Day. The film follows them on that day and reveals a world of painful memories as well as the villagers’ profound determination to cling to their ancestral land.

The Men behind the Wall

Tinder. A woman seeks man. Man seeks a woman. Everything could be so simple if she weren’t in Israel and the guys “nearby”, as suggested by the app, weren’t in the West Bank. Ines, an Israeli woman from Tel Aviv, the filmmaker and protagonist, makes contact with men from the West Bank and Gaza Strip through dating apps. Straddling the virtual and physical worlds, she goes on a journey through the West Bank, ready to challenge both Israeli law and social norms.

I Signed the Petition

Immediately after a Palestinian man signs an online petition, he is thrown into a panic-inducing spiral of self-doubt. Over the course of a conversation with an understanding friend, he analyses, deconstructs and interprets the meaning of his choice to publicly support the cultural boycott of Israel.

Your Father Was Born 100 Years Old, and So Was the Nakba

She looks down at her virtual ghost marked with an X. "If I were walking, I would have found it, even if it's not here anymore." Oum Amin, a Palestinian grandmother returns to her hometown Haifa through Google Maps Street View, today the only way she can see Palestine.

Using images shared on the Internet by Israelis during the Gulf War, the First Intifada and trance music gatherings, Shuruq Harb composes the portrait of a Palestinian teenager in the 1990s, in the mirror of Israeli pop culture. 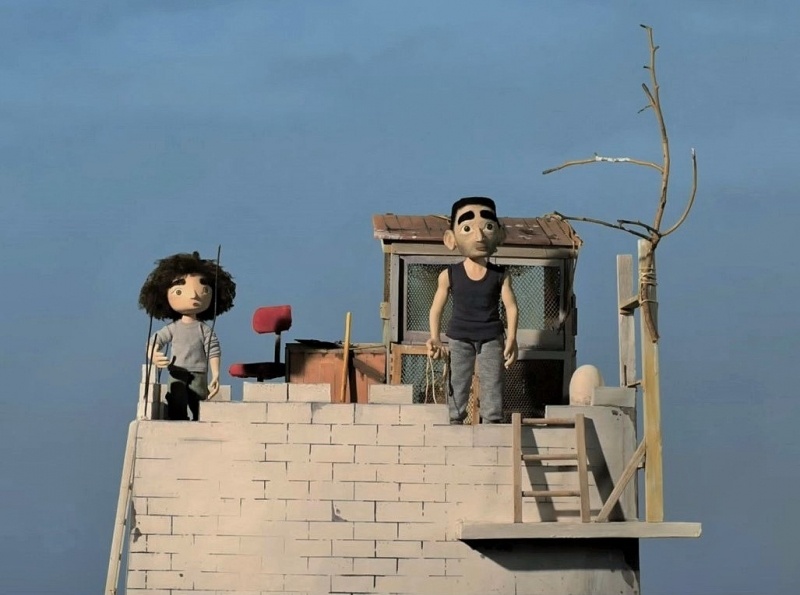 The Best of 48mm Film Festival