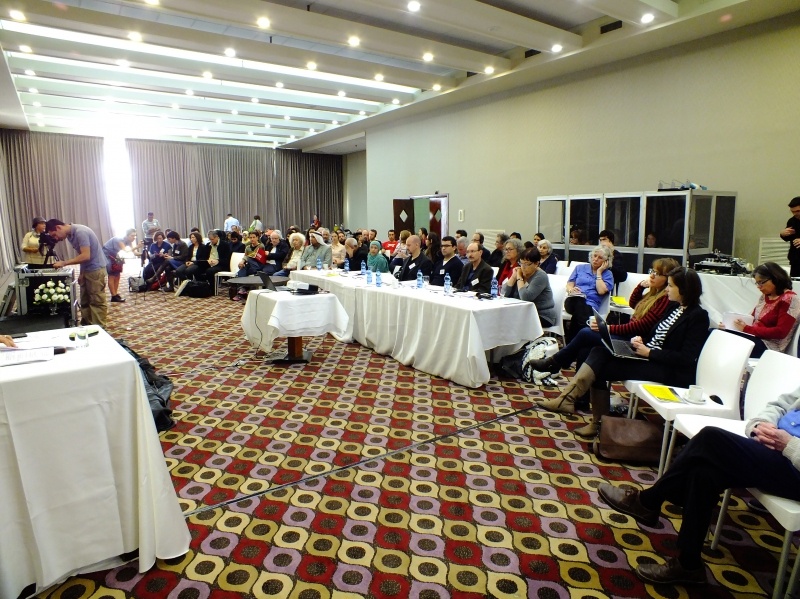 On the International Day for the Right to Truth, March 24, 2016, the Truth Commission on the Responsibility of Israeli Society for the Events of 1948-1960 in the Negev had submitted its Final Report to the UN Rapporteur on the Right to Truth, Reparation and Guarantee of Non-Recurrence.

The report presents the results and recommendations of the first-of-its-kind truth-seeking initiative implemented regarding the 1948 events in Palestine-Israel.

The Truth Commission worked for a period of two years, and its first public event was held in the frame of an open public hearing during the International Human Rights Day, December 10, 2014. Prior to the event, closed testimony-hearing sessions and fact-finding tours had taken place. The commissioners and the wide public had heard live testimonies from Palestinian Bedouins displaced in the Nakba of 1948, Jewish fighters and expert witnesses.

This Truth Commission is a civil society initiative, designed based on the experience of former unofficial truth projects around the world. It is unique, however, in being initiated by Zochrot NGO - belonging to the dominant group (Jewish Israelis), rather than the victims, who are the groups that led unofficial mechanisms monitoring human rights violations.

The Hebrew version of the Final Report was launched םn January 2016 at the unrecognized Bedouin village Al-Araqib – a grassroots action designed to reiterate that the ongoing Nakba of the Bedouins inhabitants of the Naqab - who suffer from houses demolitions, land confiscation and the relocation of entire communities, often in order to build Jewish-only settlements on their property. These days, the inhabitants of Um Al-Hiran are struggling against  the government decision to expel them from their lands and build instead a village for Jews only, named Hiran.

The English and Arabic versions of the Final Report were presented to the UN Rapporteur on the Right to Truth Reparation and Guarantee of Non-Recurrence following his request, round the events of the International Day for the Right to Truth, March 24th, 2016.

Dr. Nura Resh and Prof. Avner Ben Amos, members of the Truth Commission, said: “This Truth Commission was a first attempt of its kind in our area to make ‘Transitional Justice without Transition’״. Thus, the opening chapter of the Report introduces the complex decision to implement a transitional justice mechanism in a political context of ongoing violence, military occupation and armed conflict where no signs of either “transition” or “justice” are in site.

Tammy Pustilnick, a steering committee activist involved in the Truth Commission process who researched transitional justice in Chile, has stated: “This is an initiative about truth, which has the power to heal and build a new and solid base for longstanding peace, in which both sides will have the same information of what really happened in 1948”.

The Commission was designed to expose the truth, silenced by the Israeli regime for over 68 years, about the role of the State of Israel and Israeli-Jewish society on the Bedouin Palestinians’ plight in 1948. Specifically, it examined the displacement and dispossession of 90,000 Bedouin-Palestinian in the years 1948-1960, whose majority are refugees in Gaza, the West Bank, Sinai, Jordan and other countries worldwide. The commission findings informed suggestions for redressing these injustices by the Israeli public, within the limits of the current regime.

This first Truth Commission on the Nakba examined testimonies of Palestinians displaced from their homes and lands but who remained within Israel’s 1949 borders. It also interviewed dozens of Jewish fighters, only few of whom dared to testify about their part in acts of expulsion, looting and destruction, not to mention rape and killing.

Ami Asher, who contributed an essay to the final report titeled: “Circles of Silence: Difficulties in Collecting Testimonies by Jewish Fighters in 1948”, has stated that “a glaring contradiction arises from the testimonies. Jewish fighters in our interviews, without exception, talk about the immense value of discipline... when it came to enemy combatants and civilians discipline was so harsh that not only fear of the terrible truth, but fear of breaking ranks seems to still weigh heavily on the witnesses”.

Taking into consideration its limited mandate as an unofficial commission with no authority to summon witnesses to testify, nor access to classified documents about the events in question, the Truth Commission has published a conclusive report that would hopefully facilitate public discource of Israeli society’s moral, political and legal responsibility, and suggests practical recommendations for redressing these injustices.

Clear and official revision of the current policy, involving recognition of the Bedouins’ property rights, the return of Bedouin lands that have not been settled by others, and compensation for any property that cannot be returned.

Creating a joint study group of Bedouin Palestinians and Jews from the area – and if possible, also refugees currently living in the Occupied Palestinian Territories – to plan a solution for the Bedouins’ ongoing refugeehood and internal displacement. Such a solution will necessarily be based on the right of every refugee and internally displaced person to return to her place of origin or opt for another form of remedy of her own free choice.

Ongoing collection and dissemination of testimonies and other information about the events of 1948 and the following decade in additional areas of Palestine/Israel.
Research efforts to cross-reference oral history findings using archival sources.
Construction of both virtual and physical memorial sites.

Additional truth commissions for other areas in Israel affected by the Nakba.

Commissioners Dr. Erela Shadmi and Dr. Munir Nusseibeh stated that: “This process of recognition and accountability, and recommendations for remedy such as the return of refugees and the restitution of their status and property... breaks the cycle of lies that have blinded broad sections of Israeli society”.

The commissioners included Israeli Jews, Palestinians and Palestinian Bedouins from the Negev/Naqab area: