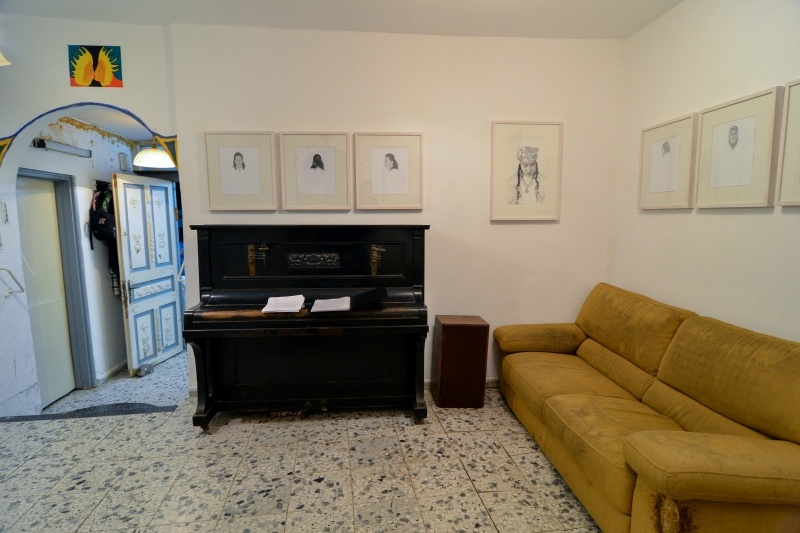 Based on the building file in the Tel Aviv Municipality Archive, the houses no. 8-14 on Zvi Rosenblatt Street are located in Block 7046, Parcel 32. Previously, after Jaffa’s occupation by the Israeli military, the street was called 3218.

The building plans of other houses on the street suggest that the block and parcel numbers match those of the British map. The Tel Aviv municipality map indicates that previously, houses no. 8, 10, 12 and 14 constituted a single house. The building file in the archive also refers to them as a single unit, on which three little houses were built along the years.

An American Colony aerial photo of the area from the 1930s proves that the area around the street had already been built up. This was the southern section of Al-Nuzha which developed with the southern extension of the eponymous boulevard (formally called King George, and after 1948, Sderot Yerushalayim [Jerusalem Boulevard]). Close observation of the aerial photos clearly shows that the house sequence in this section of the street was already there at the time.

Pre-1948 History of the Street

The building file tells us precious little about its pre-1948 past. Only one reference provides an indication of what happened: a random letter sent by tenant Jacob Bodner to the Custodian of Absentee Property in 1953. The letter does not explicitly identify the house, but interviews with the current tenants in no. 12 revealed that the house used to belong to Amidar until recently

Since there is no document affirming the previous ownerships of the houses themselves and as their “official” history has been erased, our research was expanded to include the building’s nearby environs. Houses no. 2 and 4 can be easily recognized in the aerial photos – they are the ones closest to the boulevard (on the other side of the boulevard, diagonally, we can already see the Dajani Hospital, still extant as a geriatric center renamed Zahalon).

The archived building files indicate that house no. 2 had probably been built by Sa‛id Al-Fasih in 1933, and that additional floors were added to it in 1947 as part of a renovation by its new owner Ibrahim Abu Khadra; the plans are signed by architect J. Farouki.14 House no. 4 belonged to Daoud Al-Siksik, probably already since 1933. We interviewed his distant relative Omar Siksik, currently living in Ajami neighborhood in Jaffa, who told us that this branch of the family currently resides in Jordan.

Further down the street, on the northeastern corner of Rosenblatt and Hasidei Umot HaOlam (Righteous among the Nations, formerly 224) streets, stands house no. 9. A 1936 document indicates that its owner was Mahmoud Al-‛Azuny, a fact corroborated by forms of the Jaffa Municipality Construction Committee from 1936 and 1937.

We obtained considerable information about the street from Al-‛Azuny’s construction permit of January 20, 1936. The street is indeed part of Al-Nuzha neighborhood, and the land on which the house is to be built was called Al-Sheikh Sha‛ban Parcel. The street now called Hasidei Umot HaOlam was called Saknat Darwish Road at the time, probably since this was the road leading from the eponymous suburban neighborhood, located just to the south of Al-Nuzha, into the city. We also learn that the construction engineer was Ibrahim Al-Nubani, that the building was designated for residential purposes and that its parcel’s area was 536m2. The new building’s net area was planned to be 183.13m2. According to the British map, it was located on Parcel 34/12 in Block 46.  We have not found any information about house no. 11. House no. 13, right across from the houses that are the subject of this file, was built in 1932 by Hashem Abu-‛Amara. At this point in our research, many puzzle pieces were still missing and the full picture eluded us.

Testimonies by Palestinians Who Remained in Jaffa despite the Nakba

An interview with Wa’el Kuptan broadened our perspective to include a deeper historical layer. The Kuptan family originated from Ottoman Turkey. Wa’el told us that it was sent by the Sultan – at the time when he resided in the Topkapı Palace (that is, before 1853) – as his ambassadors to the region. Various branches of the family were sent for the same purpose to other provinces in the empire.

Until 1948, the Kuptan family house stood on the ground on which the Maccabi Yaffo sports club was built by the Bulgarian [Jewish] Sports Association. According to Wa’el, the family had lost its fortunes already when the Ottomans were succeeded by the British Mandate of Palestine at the end of WWI, but in 1948, they were all forced to flee and scatter across the globe. In a map from the early 20th century, we can see that the same parcel (presently located between Heinrich Heine, Nes LaGoyim and Gaza streets) was owned by the Islamic Waqf. The area was given to the Bulgarian Sports Association since the entire neighborhood was populated after the war by Jewish Immigrants from that country.

Our significant breakthrough in solving the mystery of the history of the houses on Rosenblatt Street came following our meeting with Ishak ʽAbed Al-Ra’uf Abu ʽAmara and his son, Hisham Abu ʽAmara. The former, also known as Abu Hisham, was born in 1932 in Saknat Darwish. In 1948, his nuclear family scattered to Ramle and Gaza, while he himself fled to Jordan. After the war, since he was a minor he was allowed to reunite with his family in what was now Israel. His father managed to bring the family back from Ramle to Jaffa, and even bring back his two younger cousins from Khan Yunis in the Gaza Strip, occupied by Egypt at that time.

Sweet memories kept flooding back as our conversation unfolded, and 1930s Jaffa rose from the ashes of the Nakba. Abu Hisham recalled the day when ʽAbed Ra’uf Al-Bitar Street received its name – after the Mayor of Jaffa at the time (today it is the southern section of Shivtei Israel Street), and how all the children were taken to watch the inauguration ceremony and were given soft drinks and sweets. He studied in Al-Zahra’ near Dajani Hospital. Abu Hisham told us that his family had orange grove in the entire area. On one of the family properties, it had valuable water pumps for watering the groves. The pumps pushed water up the hill to supply the Ajami neighborhood as well. When the southern part of the boulevard was built, lands were expropriated from Abu ʽAmara and other families. In return, they received other parcels in the area.

Abu Hisham also told us about Sheikh Shaʽban, on whose land the house on 9 Rosenblatt Street was built. The Sheikh had bought abandoned orange groves and made sure they were adequately watered during the difficult years of the Arab Revolt against the British in Palestine (1936-1939).

He reconstructed familiar locations around Rosenblatt Street, trying to pinpoint the location of the house owned by his friend and relative ʽIsa Abu ʽAmara, the father of Saʽid Abu ʽAmara – the future Palestinian ambassador to Moscow and Amman and currently a minister in the Palestinian Authority. He also tried to locate the house belonging to ʽIsa’s brother, Ibrahim Abu ʽAmara – both his father’s cousin. During the conversation, we both realize that Abu Hisham is actually talking about the parcel about which we are inquiring. It appears that ʽIsa’s and Ibrahim’s houses occupied the entire parcel on which houses no. 10-14 are now located.
Abu Hisham recalled how he once went with Saʽid Abu ʽAmara to fine his house on the street, and how Ismaʽil Khalili, the neighbor, went out to the street, offered them a drink and invited them to his house. He also recalled the mulberry tree that used to be on the end of the streets. He told us that several decades ago ʽIsa’s house was still standing, but that a few years ago when he came here once more to look for the house with Saʽid, they could not find it any longer.

After 1948, all the houses in the street were declared “absentee properties” and were appropriated by the Custodian. None of the street’s original inhabitants lives there anymore. It is populated by both Palestinian and Jewish families, some are owners and some are Amidar tenants. Some of them have lived in the street since the 1950s.

The house or houses that used to stand on the parcel in questions had been almost completely destroyed. Instead, four small one-story houses were built. As mentioned, the room deployment suggests that at least houses no. 10-14 used to be part of one big house. The stone floor in the courtyard of no. 12 is also revealing. It appears to have been built long ago, perhaps do demarcate the inner courtyard typical of the local construction style and a key is poking out of it. Could it belong to the original owners?

Samah Shihadi Exhibition "Documentation" was presented in the house in Rosenblat Street in the frame of the project "Houses beyond the Hyphen" which took place between the 12-14.5.2016.