Home / Testimonies / Binyamin Eshet, Palmach soldier
It was just one PIAT. They found a little hole, 120 people snuffed it. 120 people were in this mosque. This I knew. They fled to the mosque because they thought that was the safest place – that there they wouldn't kill them. 01/07/2012 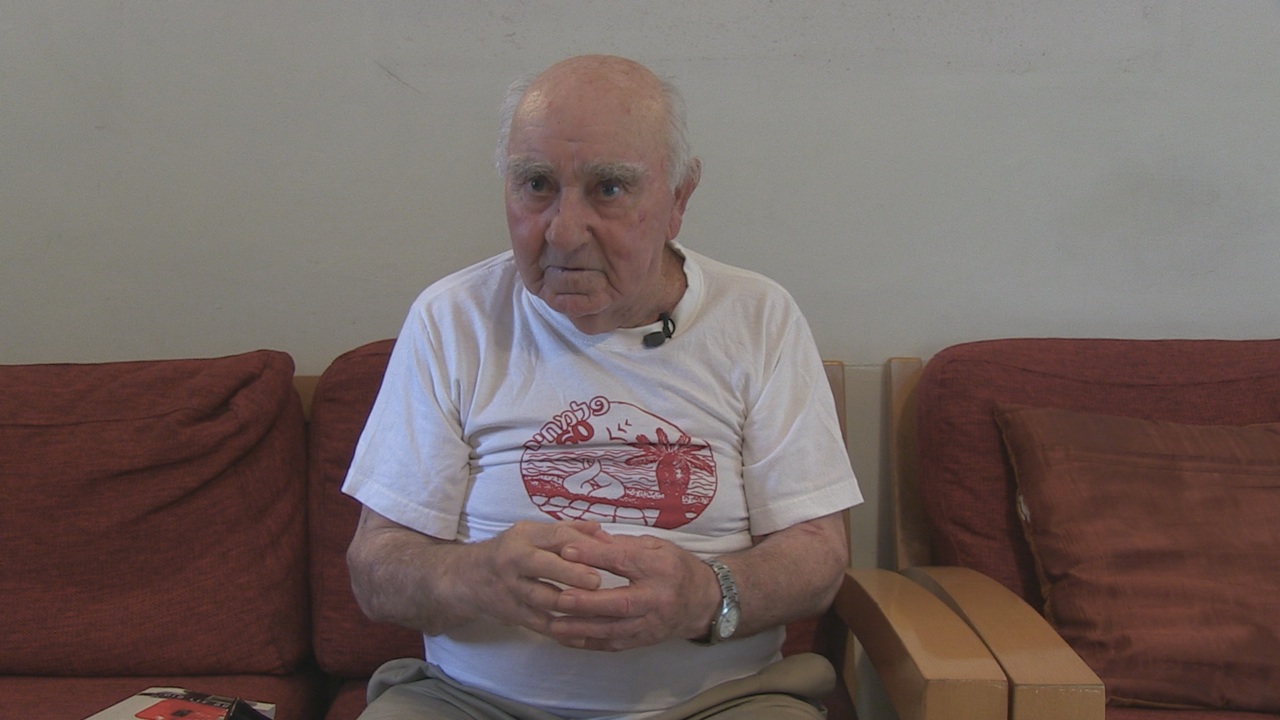 E: You saw them running?
BE: That, yes, then we saw them.

E: Where did they run?
BE: At that time they ran towards Lod, towards Lod. Then we captured it.

E: And you returned to your base?
BE: Yes. We didn't touch anything, we didn't touch anything. You should know that – also in Lod, we didn't touch a thing. We had this discipline among us that we're not taking anything. Then we took Jimzu. Later – it was Saturday, Sunday noon – in the morning we took Kfar Daniel. Kfar Daniel was already empty. One interesting thing – listen. In one of the houses, suddenly we hear screams. I hear screams. Suddenly I see the squad leader – a young Arab comes out, half naked. And the squad leader goes [in Arabic] "you slut… go to Lod". There was this girl, she thought maybe she would give her favors to the Jews, maybe she would stay alive. You get it? You wouldn't hear about this from anyone, you understand, this was… We took Kfar Daniel, we took Kfar Daniel. That was still on Saturday night…

E: In Kfar Daniel, the only person you saw was that woman?
BE: Yes, nothing in Kfar Daniel. And then we started advancing towards Lod, in line. In front of us, we saw two Arab armored vehicles – when they saw us advancing they escaped back into Lod. They shot and we shot back; we went into Lod, there was shooting. At the same time we heard Moshe Dayan raised hell in Lod, as they say. Moshe Dayan, his job was to drive into Lod, make them panic, and return to Ben Shemen.

E: So tell me, once you entered Lod? There were people in the houses?
BE: Never mind, later they went into other houses, yes, there were.

BE: There's one thing that I'm not telling you.
E: The massacre in the mosque, were you there?
BE: I was there, you know.

E: I'll tell you what I know, and you tell me what happened. The massacre in the mosque...
BE: PIAT, you know, one PIAT.

E: How far were you?

E: How do you know about the PIAT?
BE: It was talked about.

E: You actually saw it?
BE: No. I just saw one thing. These guys should have been brought to justice. No, I don't want to…

E: Yigal Allon's Gipsy.
BE: Yes, I saw it only once when they fired the PIAT – it was in al-Burj, it was later. Afterwards I didn't see. Listen, you've probably heard about those who had to bury those who…I don't…

E: What?
BE: Not that PIAT. I'm talking about something else.

E: About the cremation?
BE: There was no cremation. There was an incident when they buried these people. They had to bury them. And then those who buried them… that's it, and then…

E: And then?
BE: It was voluntary – they came and asked, who wants to volunteer? No member of the agricultural training volunteered. Those who did volunteer, they were all…

E: After the massacre, you take the bodies out of the mosque, and then you have to bury them.
BE: What do you do with those people who bury them?

E: You took part in it?
BE: No, they wanted me to participate and I didn't go, it was voluntary.

E: You know there was one who survived.
BE: An Arab? Could be. How should I know? I'm just a regular serviceman, what do I know?

E: They killed the rest…
BE: Then we stayed one day in Lod, and then they took us away.

E: How did they expel the inhabitants?
BE: There was, they declared a curfew and Yigal Allon gave the order to Gutman, Yeshayahu Gutman who was then the first governor of Lod. And he gave, and they started leaving, we saw how they left.

E: How did it look like?
BE: It's nothing, how they left. Later we met them, when we moved on towards where Modi'in is today, where the Agudat Israel kibbutz is. How are they called? It's near – there are two kibbutzim there…

E: Sha'alvim.
BE: Sha'alvim, today it's Sha'alvim. We went in that direction. We saw old people unable – those days were hot. We saw were the bodies lay. We saw how next to the belongings, and the carts, bodies lay there, who couldn't make it. They fled towards Ramallah, the fled and the road was open, you see?

E: What do you think about that?
BE: I don't feel good about it, until today. Listen, I once had a talk with Mula, [Shmuel] Mula Cohen – he was a brigade commander?

E: You mean, you spoke with Mula Cohen, about what?
BE: I told him, Mula, what? He said, forget about it, in the Independence War there were some things that did not… it didn't all go according to… Mula also did not… Listen, the senior commanders probably didn't want to talk about all these things either.

E: For you this was something?
BE: Indeed it was. I was only 16 months in Israel. You have to understand – I come from a different world. I did hear about the Warsaw Ghetto and about the partisans, but I never saw it with my own eyes. I did see it in the pogrom in Poland, at Kielce [in 1946], a little bit. But listen, in Lod we still accepted it somehow, but I saw the bodies…

E: Why is Lod such a traumatic event for you?
BE: Two things. First, it was the first time we fought in daytime. I said, at night, whether you shot or didn't, whether you killed or didn't, you're not really sure. In Lod, you saw what you were doing. For the first time. In Operation Dani, this was the first time we went out [in daytime]. I think this was also our only daytime action, actually. Because later in the Negev, it was also at night. When we were in the Negev, you know, Yiftach Brigade was a General Staff reserve unit. Wherever Yigal Allon went – that's where he took us.

E: Did Yigal Allon know of all those things, about the mosque massacre?
BE: I think he did.

E: But tell me, among you, did you talk about those things?
BE: We had no time for it – come on, who had the time for it? First, nobody had the time. We were under fire the whole day, and then we were retrained, when we went down to the Negev.

E: Did you know about the PIAT story?
BE: PIAT we knew, we knew, we knew they shot one PIAT [projectile]. It was just one PIAT. They found a little hole, 120 people snuffed it. 120 people were in this mosque. This I knew. They talked about it. They fled to the mosque because they thought that was the safest place – that there they wouldn't kill them. Because they knew Israelis would not destroy a mosque. And it was talked about.

Look, we were pulled out of Lod pretty quick. Because afterwards others came. Look, while we were still there, the theft was not wholesale, they still protected [property]; there were already some guys who, you know, that people said… And when we left, after us came a military police battalion, from the Kiryati Brigade. They took over the shops, and they started doing it big time. And they took everything – cars arrived and it became a huge marketplace. This man came to us from Givati Brigade. He was Givati's Propaganda Officer, and he told us: "I was ordered to take five radio receivers for Givati's clubs". I don't know whether he was or wasn't. There was a big argument there. I thing that in the end they let him – I didn't see it, whether he actually took or not. There was one from Rehovot, he had a print shop. I knew him, they wanted me to work in his print shop. But they came, and they started robbing.

And then pretty quick, they pulled us out. They took us to Ben Shemen. In Ben Shemen, that was really our first soul searching session. Yigal spoke and Mula spoke.

E: What did they talk about?
BE: They talked about what happened in Lod. Not about specifics, but they said that here there were things that we – we weren't brought up this way, and now we have to move on.

E: Lod is a tragedy for you?
BE: For me it's a tragedy, yes. Until today, I… Not just me, I think many guys, everyone who took part in there.

E: Is 48 traumatic for you?
BE: No, I don't think it left me with a trauma. To a certain extent I'm sort of proud, that thanks to me and others like me the state was established. And you should know, already then there were defectors and thieves, and there were dishonest things. It started already then, so don't tell me that back then everyone was so righteous, that's simply not true.

Some people became rich because of the spoils. Whoever had a car and was attached to some battalion, attached not attached. You saw – what did they not pilfer from that poor Lod, from Ramle, from Lod?

E: Why is it so difficult for you to talk about Lod?
BE: I had this incident with the Shabak [Israel Security Agency], I said something and they got wind of it and I don't want to talk about it.

E: What did they do to you?
BE: Nothing. They say, as a Palmachnik we would have expected you not to. They took some of my stuff.

E: You told the Lod story to a journalist?
BE: It was written in one of the newspapers, about the fact that I had told it. I was right there. This woman wrote it, the one that had been here.

E: Do soldiers no the story of the Lod massacre?
BE: They know, the truth is it was a disgrace, what they did, in my opinion they shouldn't have done it this way.

E: Those who buried the bodies?
BE: That's it! That's exactly what I had talked about there and that's why they called me from the Shabak. That's how it went exactly, and it was voluntary, they asked who wanted to. They took all those who were cooks, all those who didn't go [to war]. They didn't force anyone. Whoever showed up showed up, that's it. Look here, let me tell you something. The War of Liberation, today when I look at it, I look at it differently. What, what did we know?... There are all sorts of nooks and crannies…