On January 11, 2003 a group of about fifty people met in the city of Lod to hear about the Nakba of Lod and to post signs on the olive press in the old city, to remember and remind others of what happened in that place in 1948.

We listened to a talk by Dr. Mahmoud Muharab of the Department of Middle Eastern History at Ben Gurion University, and to testimonies by Fayeq Abu Mana, who was 20 years old in 1948, and Aaraf Muharab, head of the al-Wahda movement and a municipal council member.

Dr. Mahmoud Muharab explained that what happened in 1948, in Palestine in general and in Lod in particular, was not an accidental or spontaneous act. It was planned and organized as written in IDF documents and as written by the official institutions of the state of Israel, sometimes explicitly and other times hinted.

The Palestinian people who live here were part of the Arab nation. The whole issue of nationhood is a new thing, nationalism is something new. There is no nationalism 500 years ago, there was no nationalism as there is today. There were religious and ethnic groups. Nationalism is a new phenomenon from the 18th and 19th centuries. Palestinians were part of the Arab nation. They began suffering from the Zionist movement. What did the Zionist movement seek? Its goals, those that you might agree with and those that you might disagree with: eliminating the Diaspora and establishing a Jewish state in the land of Israel. Those are two goals that could not be met, either eliminating the Diaspora and immigration and establishing the state, without coming at the expense of the Palestinian people. There is no way to achieve Zionist goals, to establish a Jewish state, not just a state, a state of its citizens, but a Jewish state, without the Arab nation having to suffer. And they weren’t talking about a Jewish state and that the Arabs would have national collective rights, but a Jewish state pure and simple.

The Zionist left talked about transfer more than the right, but everyone talked. They drew their conclusion that a Jewish state could not be established, certainly not in a democratic way, so long as Arabs existed here in Palestine. And certainly not if they constituted a majority. Until 1948 the Arab Palestinians were the majority in the land.

People talk about the ‘War of Liberation.’ Liberation from whom? Liberation from discovering Palestinian people in their homeland. It was done through expulsion. The Palestinians did not leave of their own will. Some of them fled, some of them were simply expelled. The case of Lod is a clear and special case, because there was a message that was written by Rabin in a ‘black book.’ And also a message in a book edited by Avraham Sela, a professor at Hebrew University, on the occupation of Lod. The history of the Hagana talks about Lod. Meaning, there is a clear written message that there was an expulsion and there was a massacre, but they are always making excuses. The case of Lod repeated itself in tens of places in other cities and villages. When Lod was occupied in July 1948 by the IDF there was a political decision to drive out its residents.

Why do we talk about the expulsion? The issue here isn’t to draw conclusions and return the expelled. That’s not the issue. But at least in order to understand the suffering of the Palestinian people. To see the other side. So that the Jewish public will understand the suffering of Palestinians and will acknowledge that they made a mistake. It’s a good thing, educationally, to admit that we made a mistake so that what happened in 1948 won’t happen again.

How can the Jews do this? You can do it this way or that way. I want them to propose alternative plans besides the return of the refugees. I want the refugees to return. People say to me, good, that’s obvious, because you’re an Arab Palestinian and you want your family members to return. Ok, I understand the Jews, but let them offer other suggestions. You can’t offer other options without recognizing the great suffering that was caused to the Palestinian Arab people. You have to recognize this suffering. We as Arab Palestinians in the state of Israel understand the point of view of Israeli, Zionist, existential society. But, for goodness sake, you have to understand the suffering caused to the Palestinians. Cities and villages destroyed, their lands were robbed.

The Zionist movement and the Jewish yishuv had 5% of the land of Palestine. Today through might and exploitation and expulsion and expropriation of land they took over the whole land. The way of the Palestinians in the state of Israel today is the way of co-existence because they are weak. But for co-existence, you need existence. Until now there has been no existence for the Palestinians. There’s the horse and there’s the person who rides the horse. Co-existence requires two sides in order to recognize the other side. I think that it’s good that you are talking about the subject. I bless what you are doing and I think you are taking on an important role, recognizing what happened. To see the suffering of the Palestinians.

Some of the refugees live today in the Ramallah area in the al-Aamri camp. I lecture at the university there sometimes and I meet refugees who ask, “How are things in Lod? What has changed?” And some are in Jordan and some in Lebanon. Some of them come to visit in Lod. The Lod municipality and the government of Israel made every effort to change the essence of Lod and the demographic structure of Lod. Despite those efforts Arabs in Lod now make up 27%. The total number of refugees who were expelled in 1948 was over 800,000 Palestinians.

At the olive press we posted a sign in Arabic and Hebrew: “Olive Press. Destroyed in 1948 with the Expulsion of the Palestinians from the City.”

Norma Musih of Zochrot spoke in honor of the signposting at the olive press:

We have come to Lod today to post a modest sign, temporary and improvised, by which to designate the Palestinian presence that was erased. By which to remind of a reality that existed, a reality whose traces were erased and whose houses continue to be systematically demolished.

In this demolished olive press the residents of Lod once prepared olive oil. The commemoration of the structure at this site has immediate significance in our time as well. Today, too, the state of Israel prevents many Palestinians from harvesting their olives. The sign signifies a place. A place that was removed from the landscape and from the map.

An innocent tourist passing through would never know what stood here in the past. This place is not part of the collective memory of Jews. Therefore the posting of the sign is also an educational act. We, Jews, will remind ourselves of what existed here before, how this parcel of land looked before the state of Israel was founded. The erasure of the Palestinian presence and the silencing of the Palestinian voice did not end in 1948. They continue today. Today, as well, houses are demolished right here in Lod. Today, as well, films that describe the Palestinian reality under occupation are censored. And today, as well, the voices of Palestinian representatives are silenced. The Nakba, for which this signs serves as a reminder, is the tragedy of the Palestinian people, but it is also a significant part of the history of the Jews in Israel. A part that has been silenced for many years. We must create words and images that will enable us Jews to tell the story to ourselves and to hear from you.

We, Zochrot, want to enable a different, alternative memory to the hegemonic memory. A memory that is not aggressive and destructive, that does not erase. We want to create sites of commemoration that will allow for the discovery of a another face to this landscape. The act of posting signs is an ongoing act which purpose is to return the presence of the villages.

As part of the effort to speak the Nakba in Hebrew Zochrot operates a website that serves as a database on the Nakba. We try to tell the story in our language to Jews. At encounters with students and teachers we try to overcome the sense of threat that many Jewish people feel at the existence of this story. Zochrot also participates in commemoration activities carried out by Palestinians.

For some time now many Palestinian families have created private spaces of memory for themselves. Those who can visit their villages do so. The private memory becomes a political and collective memory. The Nakba is part of the collective memory and the daily reality of the Palestinian people. Therefore recognizing our responsibility as Jews for this tragedy and talking about it are necessary preconditions for reconciliation between the two peoples. Reconciliation based on historical justice and on social justice. We thank you, people of Lod, from the bottom of our hearts for allowing us to be here, to post this sign and to listen.

Following the signposting we went to visit the Tory family whose house was demolished a few days before. We heard about the demolition and about the rebuilding that began immediately afterwards. Today, the skeleton of the house is almost completed. But there is no guaranteeing that it will not be destroyed again. 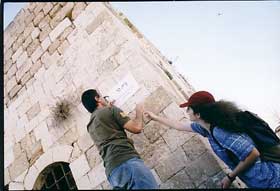