Tour at al-Lydd - Report The tour began in the parking lot of Lod’s current municipal building, and ended in the front of Dahmash mosque where the Palmach massacred some 120 civilians. After the tour, as part of Zochrot’s activities devoted to thinking practically about the retur

The tour of al- Lydd (Lod) that took place on Saturday, 12.10.2012, concluded with a screening of testimonies by Palmach combatants who’d taken part in the capture of the city. One of the testimonies, of Yerachmiel Kahanovitch, was particularly difficult for the audience of some 40 people, many of them Palestinian residents of Lod.  Some had just acted as guides for the tour of their city; they told participants about the history of al- Lydd (Lod) and about the horrors accompanying the capture of the city in 1948, which they’d heard from their parents and learned from books.  The video selections, taken from an exhibit of filmed testimonies by Zionist combatants in 1948 displayed in the Zochrot gallery, provided participants with a rare opportunity to hear for the first time in their lives testimony by the Israeli who fired a shell into the Dahmash mosque and murdered dozens of civilians.  Kahanovitch’s words were chilling testimony, no less than the accounts of the families as we walked through the streets and saw the places where the horrors occurred – such as the massacre in the mosque, burning of corpses, a mass grave, life in the ghetto neighborhood, the mass expulsion, the looting and the expropriation of the refugees’ homes.

During the tour we distributed a booklet, “Remembering al- Lydd ” to the participants and erected signs pointing the way to the mass grave, to the ghetto neighborhood and the building which had served as the Palestinian municipality until 1948.

The tour began in the parking lot of Lod’s current municipal building, next to Kikar HaShoter (Policeman square), the intersection of HaHashmona’im Street and Tzahal Boulevard.  The municipal building was once the home of the Palestinian Mseih al Asbah family which had been expelled from the city in 1948, and was later enlarged.  At the western edge of the parking lot is an example of a Palestinian building taken over by Israel and leased to other families.  Next to the municipal building, to the northwest, on Danny Mass Street, is a one-storey Palestinian house whose owners were able to reclaim it after a long legal battle with the state authorities who had confiscated it, claiming the owners were not in the country.  The family, which had begun its journey as refugees in 1948 with one woman whose was in an advanced stage of pregnancy, were fortunate to have been returned to al-Lydd on the orders of an Israeli soldier at the Ben Shemen checkpoint who saw that the woman was unable to walk.  In al-Lydd the family was sent to the ghetto (the center of the old town, near the mosque, the church and the clinic) together with some 500 other Palestinians who’d remained in the town.  At the same time the state expropriated the family’s home to house Jewish families.

Beyond the plaza, at the beginning of HaHashmona’im Street, near Henrietta Szold Street, on a slight rise, you can see al-Lydd's Muslim cemetery – an old cemetery which is still in use today.

The western edge of the Palestinian town of al- Lydd in 1948 lies about two kilometers from the cemetery.

About 70 people began the tour, most of them Israelis, walking northeast on Tzahal Boulevard.  The white house on the right belongs to the Hanhan family, one of the few Palestinian families who remained in the city despite the Nakba.

Farther along, on the right, past Blum Street, is a vacant plot of land, where the Habash family home stood.  George Habash, the leader of the Popular Front for the Liberation of Palestine,was born here in 1926.

We continue on Tzahal Boulevard to the corner of Borochov Street.  An unpaved parking lot is on the right.  According to old-time residents of al-Lydd, there’s a mass grave here. According to the testimony of a Palmach combatant, the Israeli army ordered Palestinian youths to bury people who had been killed in a mass grave.

At the end of Tzahal Boulevard, at the intersection with Herzog Street, is a building with a rounded façade – the Palestinian al-Lydd municipal building until 1948.

We turn right here from Tzahal Boulevard, toward the east, on Golomb Street.  About fifty meters along the road we see on the left a partly destroyed building which housed a Palestinian olive oil press.  We continue straight, toward the mosque and church. That’s the large mosque; next to it is Saint George church, also known as al- Khadr church. Not far away, on the right before reaching the mosque, is the building which until 1948 had served as a hospital. The building is church property and is today a school.

This area, which was the heart of the old town, was surrounded by barbed wire in 1948 and all the Palestinian families who hadn’t left the city were concentrated here. It was known as “the ghetto neighborhood,” and contained some 500 people who were imprisoned here for a year, with a gate guarded by Israeli soldiers.

Continue north, past the parking lot for the mosque and the church, to an unpaved area.  Approximately 100 meters away, on the right, is Khan al- Hiluw, an ancient building, partly destroyed, which was in the past an inn run by the al-Hiluw family. Today the building is undergoing preservation.

We return to Golomb Street, walk in a northwesterly direction, turn right onto Herzog Street.  We turn left at the end of the street onto HeHalutz Street and stop at Palmach Plaza.  The mosque to the left is the Dahmash mosque where the Palmach massacred some 120 civilians. Later they brought Palestinian youths from the “ghetto,” made them collect the bodies and burn them at the cemetery near Katzenelson Street, about 200 meters west of the mosque and Palmach Plaza.

The tour lasted about two hours, on foot through the city, for about two kilometers.

Planning the return to Lod

As part of Zochrot’s activities devoted to thinking practically about the return of Palestinian refugees and developing ideas and models for implementing the return and planning what it would look like on the ground, we decided to create a group to plan the return to Lod.  It will be composed of Palestinians and Jews who – in addition to supporting the right of return – have a connection to al-Lydd\ Lod and are interested in learning about the city’s past and present and in preparing possible future plans that take into account the return of al-Lydd's refugees to the city as it exists today.

Part of the transcription of two testimonies are available no online: 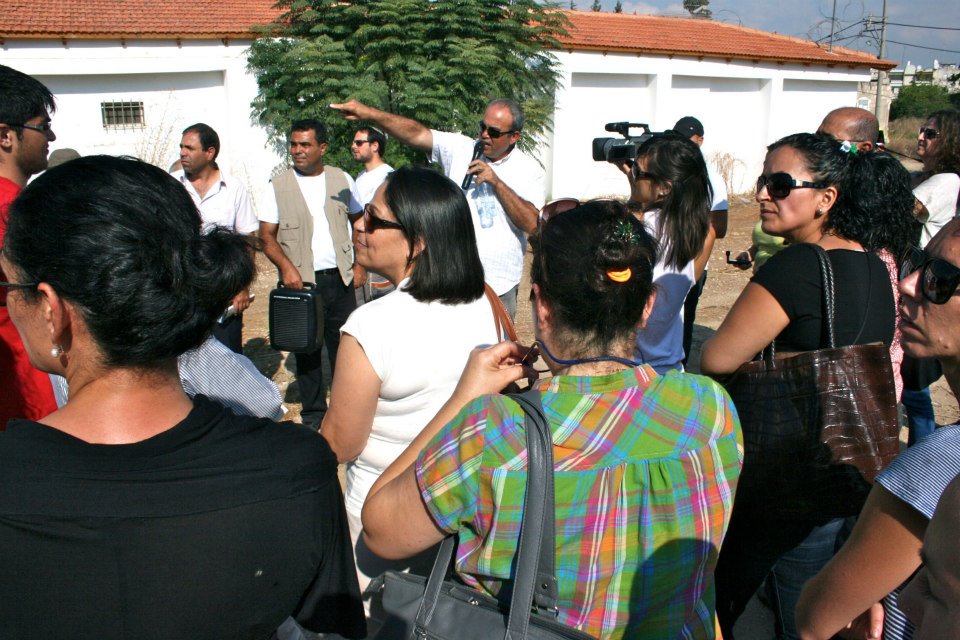